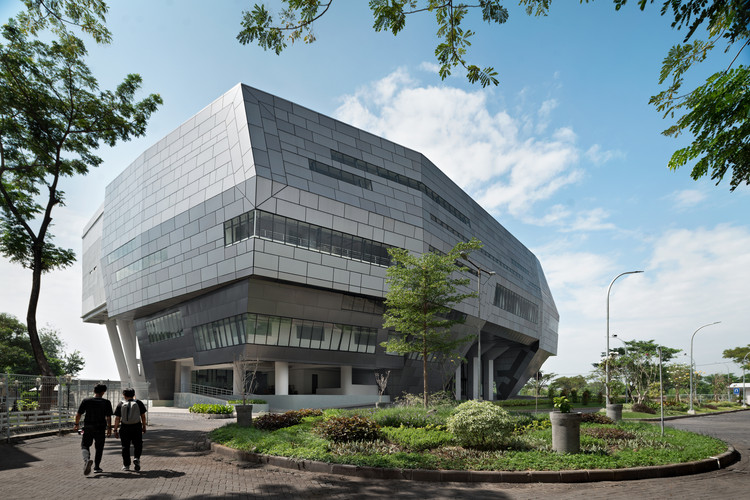 Text description provided by the architects. Located in the East Region of Surabaya, the WM Plenary Hall's brief was simple : to create a building that caters for the annual graduation. Rather than simply designing a building that accommodates 2 1.500 students, we began asking ourselves, what other values can we add to make this building a student-centric building, rather than just being a monument used sparingly every year.

As the project was procured through a closed competition, we look at ways to create an architecture that is different than the existing typology in the area. In the end, an idea of injecting various informal programs came into the design as a solution. The result is quite straightforward, yet unique.

Infused Activity. A big atrium is placed on the ground level, which leads to a multifunction hall on the second floor. We put smaller function rooms (meeting and study) on the mezzanine floor to create a connection between the main void and student’s activity. It’s purposely designed to accommodate both communal, specific and private program. The auditorium  fully occupies the entire 3rd floor alongside with backstage area and cafeteria.

Section of Program. A new problem arises when the main auditorium capacity is enlarged to 2.000. With a much bigger upper floor, the building will need to either decrease floor area in communal area or reduce the budget given at other aspects of the building, such as the facade. Mass Transformation. To still achieve an efficient enough floor area for student activities while also having enough budget for facade, we decided that it is important to build efficiently. We decided that rather than increasing floor area at the lower levels, the building should remain 'top-heavy' while we look at ideas to wrap the building efficiently.

The solution comes through the creation of a minimal-waste skin configuration, which is tailored to follow the different floor masses dynamically. Through a thorough research on different types of material and modules, assisted by scripting and digital simulation, we come up with the idea of wrapping the building with various sized planar aluminum panels.

Waste-less Facade. The idea is to create enough rigid modules of panels to be replicated randomly around the building, to give a sense of 'randomness' while being calculative. We started by cutting a standard off the shelf panels into two in three different areas, creating a total configuration of 6 individual sized panels. These panels will then have two different shades of color, creating 6 pairs of different panels. Through digital computation, these 6 pairs are then put repeated and spread across the whole building, covering the protruding masses of the building like a puzzle. We then tagged each panels with codes to make sure that every panels are used in pairs whilst also creating a cutting pattern size for each individual pieces that minimize the waste of the 'off the shelf' panels.

This method generates only 7% of aluminium panel waste, when normally it can reach up to 20-25% of waste. We focus on controlling the balance between material efficiency and the overall building form, ever changing its shape slightly to come up with the most efficient waste percentage.

Compared to the initial design in the competition, there are a lot of adjustments being done as the project goes, especially for the facade. Through digital computation, these changes can easily be controlled and re-calculated in order to keep the waste minimum. This approach also help the owners confidence in keeping the building, especially the facade, within budget.