Save
Fill in the Gaps: Infill Architecture in Urban Residual Spaces
Share
Or
Copy

In all cities around the world, there are some forms of residual space, forgotten pieces of the urban fabric, remnants of overlapping layers of past development. This land whose conditions make it unsuitable for most types of conventional construction might be a fertile ground for architectural invention. Assigning a new value to vacant corner lots, dead-end alleys and strangely shaped plots opens up a new field of opportunities for inward urban development, expanding available living space and increasing amenities in densely populated cities. The following explores the potential for experiment and urban activation held by urban leftover space.

Infill architecture usually refers to the re-dedication of undeveloped land to new construction, and it circumscribes a variety of scales, approaches and typologies. Viewed by some as a means to counteract the urban sprawl, making use of existing infrastructure and by others as a decrease in potential public space and possible overloading of urban services, infill architecture is a debatable and nuanced topic. However, for a variety of reasons, from densifying urban centres to restoring coherence to the urban fabric, the underlying potential of residual urban spaces is a subject of great interest. In light of the rising urban population and high value of land in cities, it is worth examining different ideas, urban initiatives and projects that could paint a comprehensive picture of the infill architecture phenomenon.

A Trademark of Japanese Living Culture

It seems fitting to start the discussion on infill architecture by mentioning the Japanese creativity and lack of inhibition when it comes to making the most out of a hyper-condensed urban environment. Projects such the Love House by Takeshi Hosaka Architects, the House in Nada by FujiwaraMuro Architects, or Hideyuki Nakayama Architecture's O House are just a few examples of a distinct architecture that carefully maximizes the potential of every inch of space.

The appeal of small houses in Japan is the result of a mixture of local conditions, such as property prices, high taxes and most of all, land scarcity. In these particular circumstances, experimenting with presumably unbuildable spaces extends beyond residential projects, as is the case of SO&CO's multi-storey retail and office building in Ginza. Atelier Bow-Wow calls these spatial typologies Pet Architecture, as they denote a certain playfulness in inhabiting leftover urban areas. The studio's 'Pet Architecture guide book', through its catalogue of highly pragmatic and inventive micro-projects, creates an exciting overview of the possibilities held by residual urban spaces, in Tokyo and elsewhere.

Rising urban density and high land prices are incentives for the use of non-conventional sites in cities all around the world. The architectural phenomenon dubbed skinny house is the most common type of contemporary infill, with projects occupying narrow strips of land, usually between buildings. The spatial typology is not a new one, having precedents in medieval European cities. However, the unconventional contemporary projects resulted from these site constraints rendered the phenomenon widely popular in recent years. Filling the gap between two buildings in a historic urban fabric, Gwendolyn Huisman's and Marijn Boterman's SkinnySCAR illustrates the common traits of skinny houses: the soft division of different living spaces, incorporating additional functions to the stairwell, as well as carefully curating natural light.

If the skinny house is the consequence of a very narrow plot, some of the most interesting infill projects creatively make use of more unexpected urban residual spaces. Dutch practice Kuhne&Co's studio on Boomgaardstraat in Rotterdam was built on a narrow strip of land and floats on stilts over a parking lot. The 54-metre-long volume is only five metres deep and contains office space, a workshop and the architects' dwelling. Another one of Kuhne&Co's designs, an apartment and office space, hovers above the entrance to a delivery yard, with the ground level plot just big enough to host a concrete volume containing the entrance and a staircase.

On numerous occasions, the infrastructure projects of the past century caused urban rifts and created discontinuities in the urban fabric in the shape of odd leftover spaces. The apartment building XS House designed by ISA sits on one of these residual spaces resulted from the development of Vine Street Expressway in Philadelphia. Through its compact layout and clever use of split level apartments, the project reclaims a residual space formerly used as a parking lot, adding urban density and patching the urban fabric.

Looking at the subject from a broader perspective, it is worth reviewing how the idea of reclaiming residual spaces fits into urban policy. In 2012, Rotterdam's municipality initiated a program called Klein&Fijn (translating to Small& Beautiful), tasking Studio Hartzema with the charting of all the empty residual plots in the city centre that could host new developments. The research unveiled hundreds of sites that could accommodate small-scale projects, with the potential to enrich the urban structure of Rotterdam by 3 million square meters. Consequently, the municipality of Rotterdam developed a special permitting process for this kind of designs, and architectuur maken's house project is a result of this policy.

With few exceptions, leftover sites are used predominantly for residential projects, that is if they receive permission to be developed at all. Broadening both the array of reclaimed residual urban spaces, as well as the architectural programs that can occupy them, requires more flexible and dynamic urban planning. The subject of infill architecture has many nuances, but in all its abundance of shapes and sizes, the phenomenon represents a re-economization of urban spaces and is worth considering as a strategy for inward development. 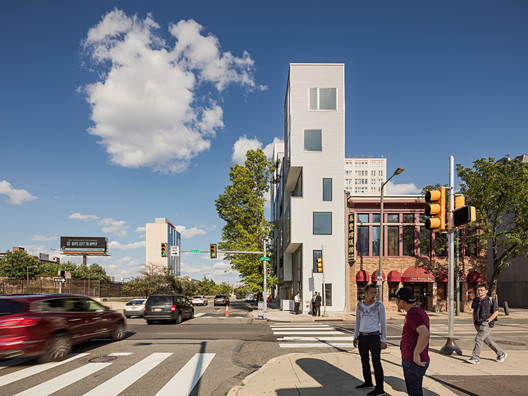