Save
The Evolution of Shared Space: Privacy vs. Openness in an Increasingly Dense Architecture
Share
Or
Copy

These questions are enormous, encompassing a wide variety of complex issues and persisting despite decades of different architecture and urban planning solutions. I chose to take a closer look at these questions at three different scales, hoping to narrow down the issues and the ways they can categorically be addressed. Thus, I investigate the broad issues of privacy, openness, and density at 1) the dwelling level, 2) the street level, and 3) the city level, offering the occasional granular solution but more importantly drawing attention to larger issues, as many of these problems do not have easy, prescriptive solutions.

Typically, dwelling sizes are much smaller in dense cities than in suburbs or rural areas. For families or couples sharing small apartments, individual privacy can thus be an important consideration; higher costs for city living can also mean lower quality facilities, such as paper-thin walls or lack of access to in-building laundry services, adding the issue of privacy from neighbors or strangers.

These issues are often addressable at the individual level, for example by the resident or architect, making solutions slightly easier to prescribe. One very concrete privacy issue for city residents is that of windows. New Yorkers or tourists who have visited the High Line may have noticed that many of the park’s surrounding apartments, with their luxurious floor-to-ceiling windows, are entirely open to the public’s view. The last time I visited, I noticed an apartment balcony that could be reached from the High Line with a small leap. While many of these apartments were not inhabited, they provide a useful example for how an element as simple as windows could be a potential privacy issue. The solutions, thankfully, are manifold – architects and residents can install light emitting curtains, use translucent rather than transparent glass, or even set up smart blinds, which can be activated at the user’s convenience or even be scheduled to open and close at specific times.

The issue of privacy internal to an apartment – i.e., privacy from family members, roommates, or significant others – is equally important when the lack of space often makes it difficult to simply escape to be on your own. The trend of tiny apartments, while catering largely to individual users, offers several fascinating solutions to make the most of a small space. These include making use of multiple half-sized levels in apartments with high ceilings, implementing transformable furniture to create and shape new spaces, and more. Apartments with multiple levels, like MYCC’s Urban Shelter and A Little Design’s 22m2 Apartment in Taiwan, are built only for one user each but reveal how multiple levels in small apartments can create pockets of privacy while remaining well-lit and relatively open for the small amount of space. Other examples of tiny apartments, like Anne Rolland Architecte’s Studio Li, reveal how furniture can be used to partition a space and create, essentially, three miniature rooms out of what is in reality only one. These solutions are particularly useful for extra small apartments containing more than one user.

Privacy can also connote safety. At the dwelling level, this type of privacy is simple – locks, keys, bolts, apartment codes, et cetera. Some smart technology companies have even begun selling smart locks, allowing residents to access their home’s locked doors simply through their mobile phone rather than a physical key. Of course, smart technology brings its own host of privacy concerns. Smart home devices are endlessly convenient, often aesthetically pleasing, and have been hailed by many as the future – yet they also by necessity track personal data, which could be abused by companies or even by hackers. Like with the question of openness versus privacy more largely, the question of convenience versus privacy vis-à-vis smart devices is a precarious balancing act, one that consumers must make their own choices about but which could have consequences for society more largely.

At the street level, privacy, safety, and openness are equally complex issues, if not more. In The Death and Life of Great American Cities, Jane Jacobs’ solution for street safety is broaches the related topics of privacy and community. Street crime, she observes, is not mitigated by increased police presence – a reality that America, sixty years later, clearly has yet to understand – but by the (often unwitting) contributions of street residents and shopkeepers. To summarize very briefly, street crime is prevented when the people on the street see it and put a stop to it, or when there are enough people on the street to discourage it from happening to begin with. This requires for restaurants, stores, bars, and other establishments to exist intermittently on the street level, and for residents to feel some kind of attachment and therefore responsibility for their neighborhood. Therefore, as much as privacy is essential in dense urban settings, so is community. Community also allows neighborhoods to more effectively advocate for themselves, as Jacobs herself did to help prevent Moses’ superhighways from decimating Greenwich Village. Yet Jacobs’ conception of community itself treads the line between privacy and openness – a proper urban neighborhood according to her exists somewhere between strangers and close friends. She gives the example of trusting a shop owner she knows well enough to hold onto something for her for a few hours.

Obviously, it is difficult to artificially force a neighborhood to feel attached to their community. But architects and urban planners can do this by making neighborhoods desirable to live in and by concretely incorporating enough street-level stores and restaurants to make sure the streets are lit and monitored at all times. This step is beneficial not just to decreasing crime but cyclically to desirability itself: while residents can always retreat to the privacy of their own homes, they have access to leisure spots only minutes away.

Yet the question of privacy and safety gains new meaning today, as people around the world are warned away from shared spaces for fear of COVID-19 spread. How can architecture, particularly in dense areas, reduce risk for inevitable future pandemics? Will the anxiety over hygiene instigated by coronavirus have lasting effects on the way architects and urban planners design going forward? Interestingly, while many non-essential workers find themselves spending more time at home, some have noticed that the streets are actually becoming more heavily used by pedestrians. In a New Yorker article from a few months ago, architect Ilias Papageorgiou observes of Athens that people are walking more and in parts of the city they’d never walked in before. Cities like New York have blocked off pedestrian-only streets, some with outdoor restaurant seating to follow social distancing guidelines. At least for now, previous delineations of private and public space, as well as their functions, have completely shifted. If home offices and remote work become more mainstream practices, there might be both a heavier emphasis on private spaces like domestic dwellings, and spaces like the streets might orient more toward pedestrians, rather than cars. This transition from cars to walking could reductively constitute a shift away from privacy and toward openness, as street users would no longer remain isolated in their cars, but interact with neighbors and other passersby.

Of course, as a city is constituted of its streets and buildings, the questions of privacy and openness on the street level are relevant to the city more largely. The principle of keeping streets active and social, as was noted by Jacobs, can be multiplied to the city level: not only should stores and restaurants be dispersed throughout the streets, but zoning areas for a diversity of uses more largely is an essential task of urban planning. If streets are to be safe, and thus are used at a variety of different times, then a single area cannot consist only of office buildings and 9-5 businessmen (e.g. Wall Street). Zoning for a diversity of uses creates much better conditions for ensuring the safety of public spaces.

Moreover, if the COVID-19 pandemic has proved anything, it is that outdoor, public spaces are very much a necessity. The anti-density principle of the garden city is not useful or necessary, but parks and public plazas are certainly not inherently bad either. To ensure that a city balances both public and private needs, planners should understand the importance of parks and streets on a city level, and more importantly, they need to design them well. Streets should be frequent – long blocks are not only inconvenient for pedestrians, but potentially dangerous if they discourage foot traffic. Sidewalks should be large, to accommodate for pedestrians especially if virtual work becomes more common due to the pandemic. Parks should be attractive and well situated, but not overabundant. Morningside Heights in New York, for example, has two parks – Morningside Park and Riverside Park – which are only a few blocks apart, spreading potential users thin between them.

Density is not a bad thing – in fact, as many city residents can attest to, it can be endlessly interesting and exciting. But it necessarily calls into question the essential issue of how to balance privacy with openness. As the urban population around the world increases exponentially, as cities get denser, and as questions of safety grow more pertinent with anxieties over COVID-19 and street crime, these questions are more important than ever. It is the responsibility of architects and urban planners to address them effectively.

NewsArticlesPublic SpacesdensityUrbanismCitiesPrivate housingUrbanMaterialsADTopic 2020 How Will We Live Together
Cite: Lilly Cao. "The Evolution of Shared Space: Privacy vs. Openness in an Increasingly Dense Architecture" 12 Aug 2020. ArchDaily. Accessed . <https://www.archdaily.com/945415/the-evolution-of-shared-space-privacy-versus-openness-in-an-increasingly-dense-architecture> ISSN 0719-8884
Save 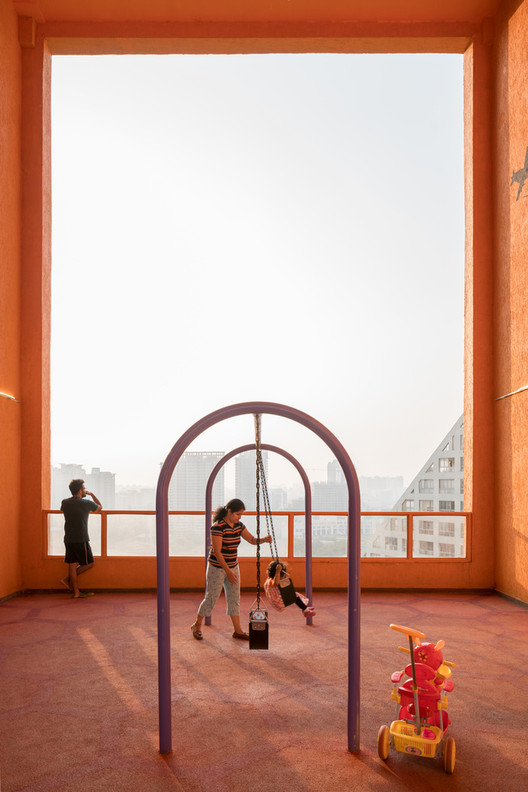