Ville Radieuse (The Radiant City) is an unrealized urban masterplan by Le Corbusier, first presented in 1924 and published in a book of the same name in 1933. Designed to contain effective means of transportation, as well as an abundance of green space and sunlight, Le Corbusier’s city of the future would not only provide residents with a better lifestyle, but would contribute to creating a better society. Though radical, strict and nearly totalitarian in its order, symmetry and standardization, Le Corbusier’s proposed principles had an extensive influence on modern urban planning and led to the development of new high-density housing typologies. 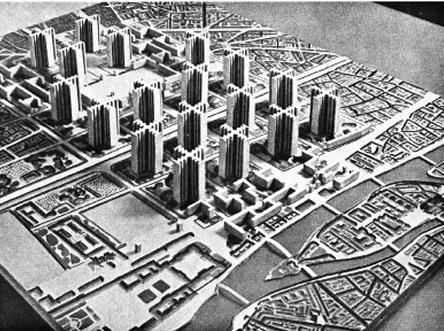 In accordance with modernist ideals of progress (which encouraged the annihilation of tradition), The Radiant City was to emerge from a tabula rasa: it was to be built on nothing less than the grounds of demolished vernacular European cities. The new city would contain prefabricated and identical high-density skyscrapers, spread across a vast green area and arranged in a Cartesian grid, allowing the city to function as a “living machine.” Le Corbusier explains: “The city of today is a dying thing because its planning is not in the proportion of geometrical one fourth. The result of a true geometrical lay-out is repetition, The result of repetition is a standard. The perfect form.”

At the core of Le Corbusier’s plan stood the notion of zoning: a strict division of the city into segregated commercial, business, entertainment and residential areas. The business district was located in the center, and contained monolithic mega-skyscrapers, each reaching a height of 200 meters and accommodating five to eight hundred thousand people. Located in the center of this civic district was the main transportation deck, from which a vast underground system of trains would transport citizens to and from the surrounding housing districts.

The housing districts would contain pre-fabricated apartment buildings, known as “Unités.” Reaching a height of fifty meters, a single Unité could accommodate 2,700 inhabitants and function as a vertical village: catering and laundry facilities would be on the ground floor, a kindergarden and a pool on the roof. Parks would exist between the Unités, allowing residents with a maximum of natural daylight, a minimum of noise and recreational facilities at their doorsteps.

These radical ideas were further developed by Le Corbusier in his drafts for various schemes for cities such as Paris, Antwerp, Moscow, Algiers and Morocco. Finally, in 1949 he found a state authority that provided him with a “free hand” - The Indian capital of Punjab. In Chandigarh, the first planned city in liberated India, Le Corbusier applied his strict zoning system and designed the central Capitol Complex, consisting of the High Court, the Legislative Assembly, and the Secretariat.

Perhaps the largest realization of Le Corbusier’s ideas can be witnessed in the conception of Brazil’s capital, Brasilia, which was constructed on a vacant site provided by the President of Brasil. Upon this tabula rasa (which Le Corbusier would have coveted), Lúcio Costa and Oscar Niemeyer designed a perfectly geometrically ordered city that segregated the monumental administration zones and the identical housing districts, owned entirely by the government. By implementing Le Corbusier’s principles, Costa and Niemeyer hoped to create a city that materialized equality and justice.

The Radiant City’s influence was not exclusive to the world of urban planning. In 1947, Le Corbusier designed the Unité d'Habitation in Marseille, which - inspired by The Radiant City’s Unités - contained 337 apartments in a single building, along with public facilities on the roof and ground floor. Due to the costs of steel production in the post-War economy, the Unité d'Habitation was constructed of exposed concrete and heralded the arrival of brutalist architecture. In the years that followed, four similar buildings were erected in France and Germany. This typology, which provided an answer to the Post-War housing shortage, was further adapted around the world in countless housing projects.

Today, in the aftermath of Modernism, Le Corbusier’s built cities are hardly ever described as Utopias. Brasilia, for example, has been harshly criticized for ignoring residents' habits or desires and for not providing public spaces for urban encounters. In addition to this, the Unité-inspired apartment blocks, which lie on the outskirts of nearly every major city today, have become incubators of poverty and crime; most have been thoroughly remodeled or demolished.

Nevertheless, the idea of proposing order through careful planning is as relevant now as when Le Corbusier first published The Radiant City. Issues of healthy living, traffic, noise, public space and transportation, which Le Corbusier - unlike any architect before him - addressed holistically, continue to be a major concern of city planners today.