Historians have not agreed on the historical facts of ancient India and Southeast Asia, since the region’s Harappan script had not been accurately deciphered, and in return, revealed very little concerning their civilization.

Regardless of the scriptures’ uncertainty, it is acknowledged that most of India’s prehistoric structures were the result of settlements alongside the Indus valley and plains (modern-day Afghanistan and Pakistan). Citizens also traded with foreign settlements such as Mesopotamians and South Arabians, which influenced them to adopt some of their cultural characteristics. The Harappan settlements were laid out in an orderly and orthogonal fashion, oriented towards the cardinal directions. Unlike Mesopotamians and Egyptians, the Indus did not have palaces or royal chambers, but rather a very egalitarian social structure which influenced the types of architectures built. However, one very dominant type of structure that helped study the ancient architecture of the region and how it was developed throughout the eras, was the temple.

Monks of the Buddhist religion resided in small, simple cells around an open courtyard. As the belief never indicated a particular form of architecture for worship, Buddhists marked their shrines with stupas, a stacked mound of rubble and mud built in a semi-spherical form over relics. Many believe that the path inside these stupas and the axiality of its placement has cosmological associations. A few years later (around 250 B.C.E), the stupas were enlarged into grand hemispherical forms to symbolize the simplicity and importance of the circle (plan, section, and elevation), and surrounded by enclosed fencing. On top of the hemisphere, the structure was crowned with squared railing, called harmica, and a three-tiered element called chatra, which can be clearly seen in one of the most famous Buddhist shrines, The Great Stupa in Sanchi. In addition, large stoned gates called toranas were extensively ornamented with carvings of animals, forms, and wooden imprints.

Hindu temples were built to form a connection between the worshipers and their gods. However, in addition to places of prayer, the temples themselves were also houses for the gods and objects of worship. The temples had a lot of integrations of cosmology and nature, focusing on specific orientations, proportionality, sacred geometrical forms, and axialities. For instance, the derivation of a divided square, or mandala, is extensively used in Hindu temple designs. In the following years, what was once built at a small scale rose dramatically in height using corbeling and post-and-lintel techniques. Temples became an imitation of mountain ranges, with intricate and excessive stone embellishments and carvings, as seen on one of the most notable Hindu temples, the Angkor Wat’s central tower of the main shrine (around 1120 C.E.). 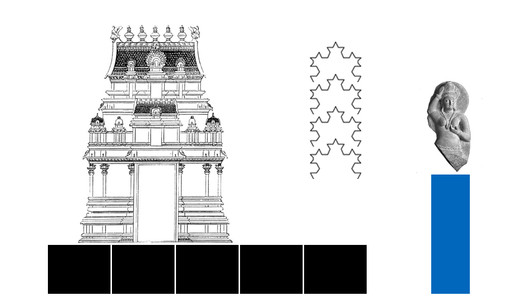