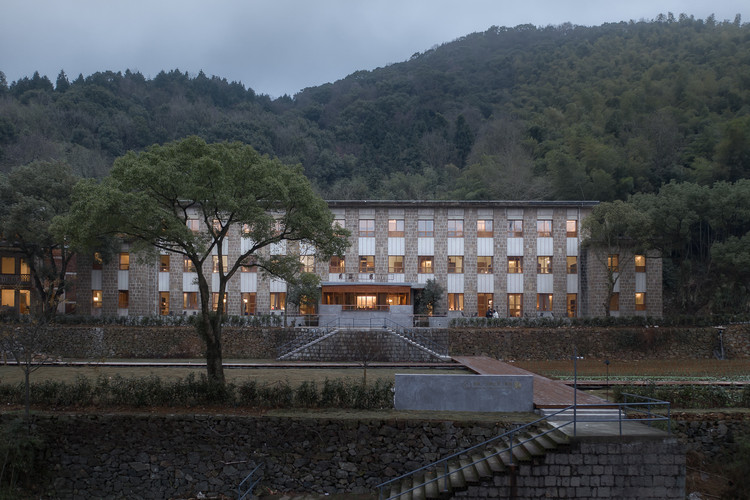 Text description provided by the architects. The Qinyong Primary School Hotel is located in the southeast of Ningbo, Zhejiang Province in China. The village, which used to be notorious for being a “rotten village” in the 1960s, was transformed under a specific historical circumstance. At the height of the communism movement in the 1970s, the whole village was demolished and reconstructed, and became the first strictly planned commune in the province. The original natural fabrics and traces were wiped out and a grid of townhouses were established with blocks of local sandstone. Meanwhile, the same material was used to build new infrastructure public buildings and such as the village gate, paths, the auditorium, as well as the primary school which has now been renovated into the hotel.

The primary school, consisting of a main teaching buildings and a wing building, sits on the high platform at the northernmost end of the village. The large platform was originally the school playground, from where one can get an aerial view of the whole village. The strip-shaped gray tile roofs are like a piece of land art, stretching all the way to the foot of the adjacent mountain.

The entire idea of the renovation comes from the preservation of the masonry structure. The design process can be called as a strategy of intervention. The original structure of load-bearing masonry walls and prefabricated floor slabs determined the spatial framework. It is impossible to punch into the stone blocks for installing pipelines, and it is also difficult to add new openings in the walls for doors and windows.

A raised platform became a driving force throughout the design. Made with wood, this platform extends all around the rooms and corridors and plays a mediating role. Through this continuous raised platform, the pipeline facilities are connected without the risk of drilling holes in the walls, and the freedom of interior distribution is achieved.

Taking advantage of the resilience of the original structure, a cafeteria is added onto the rooftop of the wing building for banquets. The addition is made by welded square tubes 5 centimeters in size. The material and its size are the outcome of optimized conditions. Firstly, the light steel structure made it possible to transport and install the components by human labor on the rooftop. Secondly, the cross-section of the square is preconditioned to hide behind the wooden enclosure. Thus the perception of the warm-toned interior is not disturbed. A staircase is added to access the cafeteria. It has openings towards different directions at various heights, framing views which give visitors a rich spatial experience while ascending.

To the overall experience, the large number of in-situ fabricated woodwork from furniture scale to room scale not only gives a feeling of a singular enclosure to the interior space, but also endows a sense of “make-do” to the momentary experience. Such specific moments of experience form a ‘de-familiarization’ effect in the interior space and detach the visitors from the continuous flow of commonness. 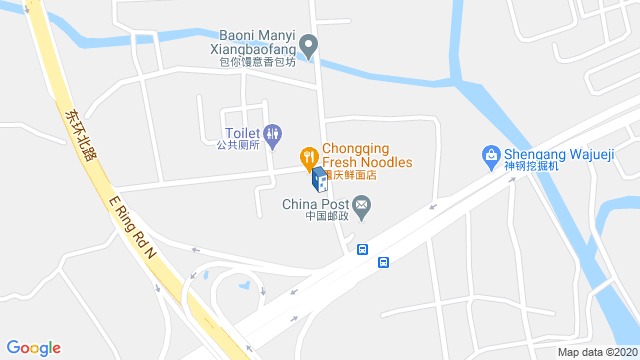 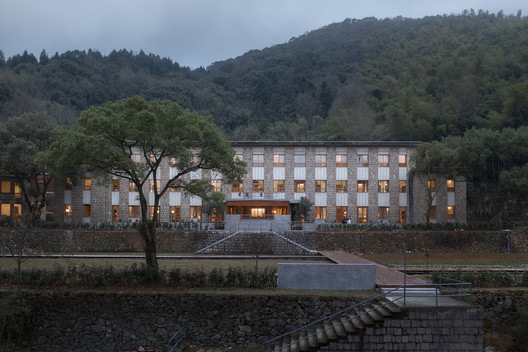