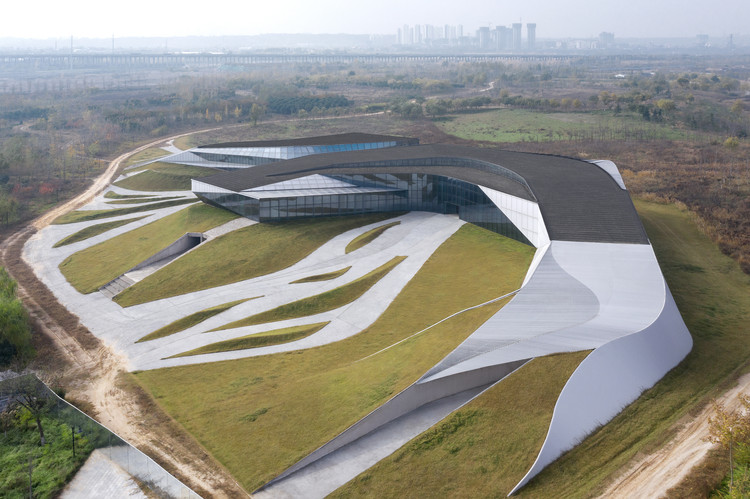 Text description provided by the architects. Xi'an Eco-Park is part of the ecological park located in the Chongwen Jing River region of Xixian New Area. The project includes an eco-restaurant and a design hotel. Based on the integrity of the design and the compatibility with the surrounding environment, we waving the architecture and landscape together, a spatial twist and the mutual transformation between architectural and landscape become the main design concept. To achieve this symbiotic relationship, we make the architectural event takes place as a consolidation or intensification of a (various) moment(s) within the park.

Morphologically speaking, the building grows from the topography at the north, evolving into a sinuous body that splits creating a gap for natural light and a vertiginous volumetric drop at the entrance plaza. Toward the south, it sits onto an artificial higher elevation, hence allowing for a series of interior spaces (children playground and greenhouse) that play with the slopes through some slanted surfaces, among which we locate the main access ramp to the upper floor. As we introduce part of the terrain into the interior space, the indoor "hill" has become the focus the design. According to the passageway hidden under the hill, the diners can entry the interior space and experience an exploratory while visiting the park. After passing through the semi-underground path, it suddenly becomes spacious and then turns to enter the indoor activity space.

The design hotel is located on the north side of the restaurant in a way that is similar to mirror rotating. Unlike the ecological restaurant, the continuous blocks are opened from the outside elevation to forming the open balcony of the rooms. Besides, the curve of the roof is naturally shaped into a zigzag triangle resulting from the stronger twist.

Diagrammatically speaking, the building is a major arc with both of its end points at the lowest elevation (+0.00m) and its middle point at the highest elevation (+4.80m). The three-dimensional spatial distribution resembles an ascendant spiral movement which is actualized by a membrane that more than covering/enclosing the internal area of this arc, augments the rich plasticity of the diagram as such. On the north side, 5 curves run along various elevations, working as a veritable extension of the ground to the roof of the building showcasing striations and depressions—topographic features in themselves. At the south side, at the other end point, two of the controlling curves of the roof drop dramatically reaching the ground, the green space flowing out with the bottom reflects the ecological nature of the project. 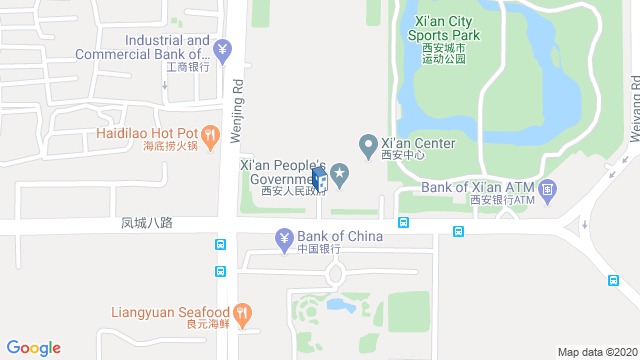 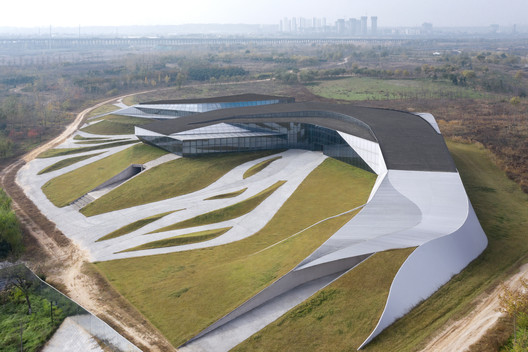