Save
A Display of Informal Architecture: New Documentary on the Ukrainian Makeshift Balconies Phenomenon
Share
Or
Copy

Taking advantage of a lack of governmental regulations, many Ukrainians turn to their balconies to compensate for the shortage of space in prefab-Soviet housing, rebuilding them in a variety of shapes and sizes. The short documentary Enter Through The Balcony explores this phenomenon in Ukrainian architecture, revealing a compelling image of post-Soviet history through local everyday life and culture.

In addition to showcasing a unique attitude towards private versus public space, the makeshift balconies phenomenon is also a symptom of the dramatic pendulum swing from mass uniformity and anonymity, to freedom of expression and ownership of private space, which shaped attitudes and architectures across the former Eastern bloc after 1991.

Across Central and Eastern Europe, the socialist political regime manifested itself architecturally through mass standardization, expansive collective housing estates, and a specific architectural expression, defined today as socialist modernism. The informal architecture that sparked around this type of architecture in Ukraine (as well as elsewhere) reflects the complicated relationship of the individuals with this architectural heritage, a symbol of an equally convoluted past. The Ukrainian makeshift balconies phenomenon also highlights the shortages of the housing schemes developed in the period between 1955 and 1991.

Enter Through The Balcony features the stories and people behind this particular example of informal architecture. While the teaser, released half a year ago, had a very cinematic approach to the subject through its rhythm and sound design, the trailer brings about some context to the phenomenon, narrating the cultural framework of the makeshift balconies trend.

The short documentary is the work of Roman Blazhan, a Kyiv-based filmmaker, producer, and founder of the Minimal Movie video production company and creative agency. The studio’s body of work in the realm of architecture film also features a short video in support of the book Soviet modernism. Brutalism. Post-modernism. Buildings and Projects in Ukraine 1960–1990, showcasing Kyiv’s socialist architecture landmarks.

Supported by The Ukrainian Cultural Foundation, Enter Through The Balcony is now part of current festival screenings and will be available online in 2021. 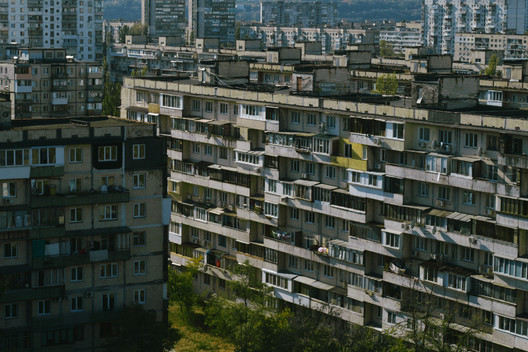