Save
Socialist Modernism on Your Smartphone: This Research Group is Raising Funds for a Crowdsourcing Mobile App
Share
Or
Copy

Recent years have seen a rapidly increasing interest in the architecture of the former Soviet Union. Thanks to the internet, enthusiasts of architectural history are now able to discover unknown buildings on a daily basis, and with the cultural and historical break caused by the collapse of the Soviet Union, each photograph of a neglected and decaying edifice can feel like an undiscovered gem. However, often it can be difficult to find more information about these buildings and to understand their place in the arc of architectural history.

That was the reason behind the creation of Socialist Modernism, a research platform started by BACU - Birou pentru Artă şi Cercetare Urbană (Bureau for Art and Urban Research) which "focuses on those modernist trends from Central and Eastern Europe which are insufficiently explored in the broader context of global architecture." Socialist Modernism already consists of a website on which BACU has cataloged a number of remarkable and little-known buildings. However, now the team is raising funds on Indiegogo's Generosity platform for the next step in their research project. With this money they hope to create an app on which users can add new sites and buildings to the database.

On their fundraising page, BACU describes the background to the project as follows:

The architecture of the Socialist period and more precisely the modernist tendencies of the period between 1955 and 1991, as a concept, is becoming more and more popular in specialists circles [...] Modernism in architecture first arose in the capitalist societies of Western Europe, following a series of essential principles such as "form follows function," the use of mass-produced materials, the adoption of industrial aesthetics, simplicity and formal clarity, and the elimination of unnecessary details. In the socialist countries of Eastern Europe, on the other hand, modernist trends manifested themselves as a result of their influence over professionals, an influence that was able to penetrate beyond the borders and the limits imposed by the Socialist ideology.

In Central and Eastern Europe there is a number of important architectural monuments that are representative of the post WWII identity of each county in which they are located, and express the aspirations of socialist era architects [...] Most of these buildings are found today in an advanced state of decay. Through this initiative we would like to encourage stylistic and architectural discipline and we invite the involvement of local authorities and civil society, so that the architectural value of these buildings would be acknowledged and, along with the surviving social and cultural tissue, be taken into account in the context of urban planning.

Speaking about the app they hope to create, they explain:

All the important socialist modernist landmarks would be included in this platform, allowing them to be accessed by anyone interested in these vestiges. Your contribution would help us create the interactive map and an application that would be made available in app-stores to be downloaded to any mobile device.

Correction update: This article was originally titled "Soviet Modernism on Your Smartphone:..." It was updated on September 25th to reflect the fact that the interests of BACU extend beyond just the former Soviet Union. 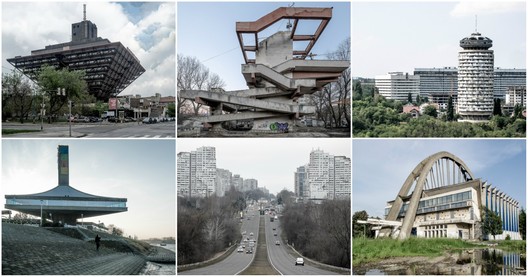