Save
From Red to Green: The Contradictory Aesthetics of Oxidized Facades
Share
Or
Copy

For a small child, understanding the concept of time and its passage is very difficult. As a result, children are often impatient when expecting something or confused when trying to remember something from the past. They live in the present, and learn the notion of time only little by little. But accepting the passage of time, and the reality of aging, is something that plagues us even as adults. The lucrative cosmetic and plastic surgery industries show how humanity seeks to control or deny the passage of time, an urge that has proved to be relentless.

This urge is also reflected in our buildings. It is well known that projects with white walls and clean, immaculate gardens require a lot of energy and resources to maintain. Periodic maintenance is a necessity, but building owners almost always leave it for later. While there are materials that clearly demonstrate their level of use and lack of maintenance, there are others that become even more interesting with the passage of time, a characteristic that is possible to take advantage of in architectural projects. Evidently, we are referring here to visual and aesthetic traits and not the functional or structural ones, which must be treated more seriously.

In recent years, we have seen several examples of oxidized metal façades in architectural projects, whether made from recycled pieces of other works or from materials in which oxidation is expected, such as corten (or patinable) steel, or copper and zinc sheets.

The oxidation process occurs naturally in most metals when exposed to air and water particles in suspension. Corten steel is a metal designed to make this oxidation process more controlled. This is achieved by adding copper and phosphorus to the chemical composition of the steel, creating a reddish layer that acts as an anti-corrosion barrier to the rest of the sheet or part. A similar process occurs in copper pieces and their metallic alloys, which when oxidized form a layer called verdigris, responsible for the greenish appearance, which also protects the internal part of the piece. Zinc sheets similarly develop a patina, though in a light gray tone, which gives them enormous longevity and allows them to last up to 120 years depending on factors such as humidity and sunlight, requiring no special maintenance.

It is important to point out that in other metal alloys, oxidation is the beginning of the metal's degradation process and must be treated as soon as it appears so as not to give rise to corrosion, which can make its use unfeasible. Among the various procedures used to prevent or delay oxidation, the most common is the application of protective paints.

Also in Australia, the reuse of structures commonly used in the construction of retaining walls, bridges, and piers has become the predominant exoskeleton and expression of the building in the Tony Hobba Architects project. They were intentionally left in their original condition to emphasize the reddish brown and yellow oxides of the weathered steel, harmonizing with the color of the surrounding cliffs.

Below, we discuss in more detail the products and materials that take advantage of this color variation and the unpredictability of future aesthetics.

Originally developed for the railway industry, this steel enriched with copper and phosphorous was conceived in the 1930s by the North American company United States Steel Corporation, creating what is now known as corten steel. It is also known by the name of patinable steel, or by the brands Cosacor or Niocor. The material works by developing an adherent and protective reddish-colored oxide film, called patina, which reduces the attack speed of corrosive agents present in the environment. In addition to dispensing with the need for a protective paint coating, corten steel also has greater mechanical strength than that of ordinary structural steels.

The shades of corten steel vary according to local atmospheric conditions. From intense red patches to brown and orange hues, corten steel facades please for their versatility and unpredictability, responding differently to each environment in which they are implanted. In the A4ESTUDIO project, Evans House, it is interesting to observe the evolution of the corten steel facade at two different times, and the way in which the building is integrated with its surroundings through these earthy tones.

Researchers point to copper as the first metal mined and worked by man. Estimates suggest that it has been used since 9000 B.C. in the Middle East. During the Copper Age (also known as Chalcolithic), situated chronologically between the Neolithic and the Bronze Age (approximately 3300 to 1200 BC), it was the most important of mankind's materials. Today, its use in civil construction goes far beyond facades and roofs. Copper is used in wires and cables to conduct electricity and in the manufacture of pipes for hot and cold gas. Copper is also widely used in sprinklers and in the manufacture of hardware for frames (locks, handles, hinges, etc.) and sanitary metals (taps and accessories).

When exposed to oxygen in the air, copper surfaces oxidize slowly, becoming covered by a blue-green patina that significantly changes its appearance. From the reddish, orange, or even brownish color of the original piece, oxidation in contact with oxygen eventually creates a dark green surface. Unlike rust, which corrodes iron, the patina actually protects and preserves the copper underneath. A patina layer takes many years to develop under natural weathering. Buildings in wet coastal / marine environments will develop patina layers more quickly than those in dry indoor areas.

Considering the temporal dimension of architecture can be an interesting exercise during the design stage. Searching the ArchDaily project collection, we see that several architects have been using the unusual and unpredictable aspect of facades with oxidized elements, which demonstrate the history of the pieces, reflect the place where they are inserted, and mimic the surroundings. While this aesthetic may not be for all, the choice of facades with oxidized elements shows that architects are not in control of everything, a reality which can sometimes torment us but also bring unexpected and fascinating results. 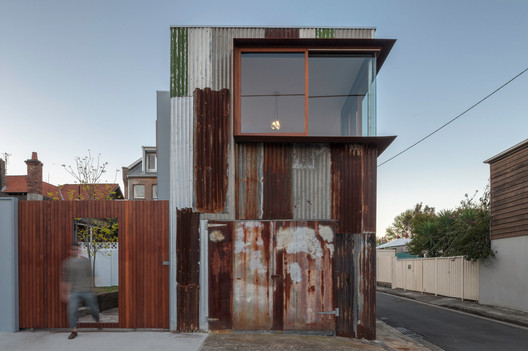