Save
PIXEL HOUSE / The Grid Architects 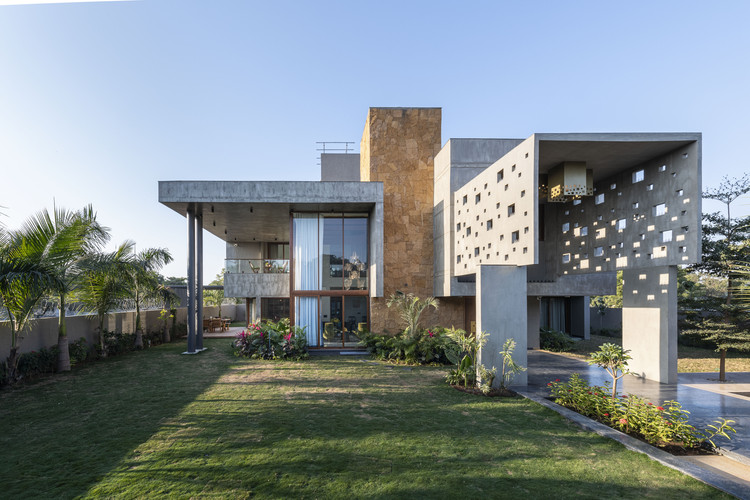 Text description provided by the architects. The antipodal requirements of privacy and togetherness drove the concept and development of this villa, which was to be the home of an extended family spanning three generations. With three couples and two children forming the members of the closely-knit unit, the design had to make room for seclusion and solitude, and shared areas that would allow congregations of different sizes. Inspiration for design can come from the most unexpected of places, and this one took off from that most fundamental building block of digital imagery — the pixel. And while this may be so, its spirit is rooted in nature, as the home emerged from an intent to embrace natural conditions, taking advantage of views, orientation, and form.

To create an understated presence and the appropriate levels of privacy and separation, the architecture was developed as a series of setbacks and stacked volumes to create a stepped form. Besides creating small congregational areas, this staggering also gave the design team opportunities to expand the amount of garden space within the internal spaces. The material application strategy respects this ‘geometricity’, with large areas of (seemingly overlapped) surfaces featuring natural stone, exposed concrete and paint, a palette which also helps in maintaining the thermal mass. The architectural form explores the idea of sheltered balconies, overhangs and spaces-under-spaces in a bid to allow each room to face the front (north) garden, as a response to the region’s hot, dry climate. The result is a structure that is gently extroverted yet retains enough privacy.

The most emphatic manifestation of the pixel concept is seen at the main entrance, which features an exposed concrete canopy perforated with a series of square cut-outs in varying sizes. The large custom-made MS lamps that are suspended within this sheltering element echo this effect. The entire composition creates a certain sense of arrival, intensified by the wonderful play of light and shadow that is enacted through the day. The internal spatial experience is centered around a feeling of contentedness — to the outside, and also within, through a seamless orchestration of volumes. Stepping within, you first encounter a vestibule/lobby, a simple, graceful space that hints at the design narrative within. The visitor is then ‘released’ into the main volume, the highlight of which is the staircase block, lined with exposed brick and crowned by a skylight.

The stepped form of the architectural envelope gets mirrored here in a miniature fashion, as a series of stepped planters that lend a sense of security to the railing-less staircase. The greenery makes the upward journey a pleasant one, as the overlapping plants invite you to touch them, creating a pleasurable sensation of walking in a garden. As with the architecture, material expression in the interiors, too, is minimal and aligned to the natural direction: stone, wood, and exposed brick are teamed with simple lime-plaster to render a classic envelope that is then overlaid with contemporary groupings of furniture, art and accessories to create an environment geared for modern living.