Save
Concrete and Stone: New Homes Reinterpreting Tradition in Cyprus
Share
Or
Copy

The architecture of Cyprus has been defined by larger geopolitical forces throughout history. Located in the Eastern Mediterranean, the island country is shaped physically and socially by the Cyprus dispute. Dating back to the bronze and iron ages, its architecture has been influenced by the Greeks, Assyrians, Egyptians, Persians, and Romans. Today, new homes are built across the island that reinterpret past building methods and construction techniques. 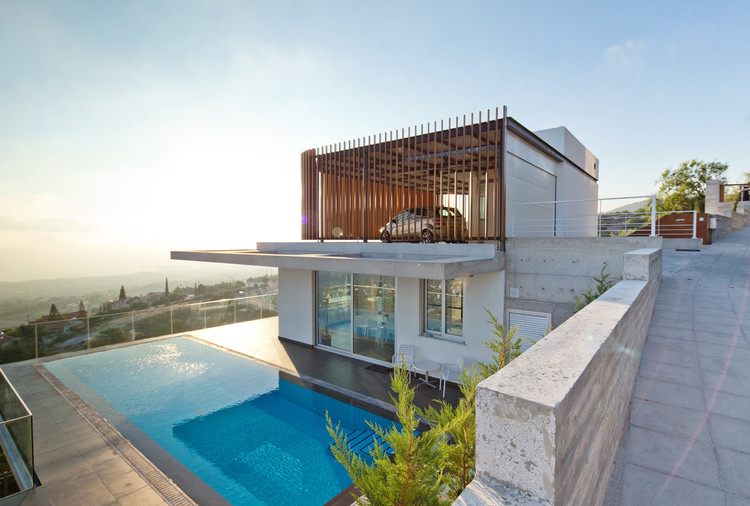 For architectural styles in Cyprus, they were often informed by either the period before or after British colonization, as well as the division with the Turkish Republic of Northern Cyprus. The British created urban infrastructure throughout the island, and in turn, grounded the building of more residential projects and civic buildings. Recognizing the past while looking to the future, the following homes showcase modern concrete and stone residences across the island. Each are built to rethink traditional forms and spatial layouts while embracing the local climate.

For this home, the client asked for an introverted residence, one with an internal yard where the water could become the central element of the space but also of the whole work. Making use of these parameters, the team formed a design that embraces the south-east sun and the western air, with spaces that prioritize height and light. At the same time, the home houses the client's art collection.

The George Michael house is located in the midst of a banana plantation in Sea Caves area, near Paphos, Cyprus. The design team saw an opportunity to open up the living spaces beyond the interior of the house and spill them among the banana trees. A set of exterior walls define the external spaces.

The refurbishment and the extension of the traditional house in Kaimakli is based on the main strategies of the bioclimatic approach, and especially on conditions that were developed through tradition : all the spaces enjoy south orientation with various ways of shading and assure generous cross air ventilation. The vegetation and the reinforcement of the breezes through it create a micro-climate in the house.

This residence is a round shaped concrete building, with a semi detached rectangular entrance. The long narrow windows following the form of the structure look out to the back yard with the timber floors and a semicircular swimming pool. The house was made to have a natural flow, with a spacious layout and structure characterized by simplicity. Internally, everything is rotated around the semicircular pool.

A House with Four Gardens by draftworks architects

The project site is located on a hillside with a steep drop down from road level. Aside from the challenge, the topography affords panoramic views to the sea. The central concept is the configuration of spaces vertically, taking advantage of the morphology of the site for access, privacy and views. Car access and parking is from street level, with the house unraveling in three levels below.

The garden house project was designed to emphasize how much potential there is for urban gardens and for the creation of microclimates which could improve the living conditions within cities and slow global warming. The design seeks to establish a unified relationship between the neighborhood, the private ( the house) and the public green area.

Completed in 2013, the pavilion is situated in a 2,000 square meter plot of land, along the Pedieos river, in the Ayios Andreas district of the city of Nicosia, Cyprus, and is designed to co-exist with a refurbished 1940’s listed house. The T shaped site enjoys an 80 meter long exposure to the river, on the east, along which, the garden gently slopes down to meet the river bank and merge with its natural habitat.