The 20th century in the design world was a period of new ideology on building form, material explorations, and ultimately, the emergence of the modern architecture movement as we define it in the present day. The expression and experimentation of architects in this era resulted in interior spaces that are now considered to be “classics”, due to their relevance and their long lasting effects that they have on the architectural discourse.

Residential interiors specifically represent both an exploration on a new way of living, but also the consolidation of a certain identity in the manner that architects design, making use of their own furniture and ideas in the organization of spaces.

We have compiled ten architectural classics previously published on Archdaily, whose interiors represent ideas and that still inspire architects around the world today.

Narrow vertical apertures on the façades adjacent to the exterior staircase establish complex crossings of natural light and shadow into the interior spaces. These patterns serve as the only ornament to the mostly concrete and wood construction home. This design is also notable for its very minimal, Japanese furnishings.

Villa Mairea is one of Aalto's designs that helps mark the transition from traditional to more modern architectural designs. From the front door to the inside of the house, the materiality of the floor changes as it becomes progressively more domestic and intimate, from stone to tiles to timber boarding and rugs. Wood columns found throughout the home mimic the verticality of the Finnish sea of birch trees that surround the site.

The Glass House is one of Brazil's most well-known examples of modern architecture. Situated on a slope, the home is divided in two very distinct parts: one hosts the living and dining room and is dominated by glass openings that form a central yard. The second part is contains the private program that occupies the upper floor and creates the the opaque portion of the house.

In Villa Planchart, spaces are organized by their program through double height ceilings that also respond to the request of the residents who wished to view the house from any internal angle. Ponti created an elaborate design scheme that emphasizes the unique visual lines across the successive spaces.

This house features a central living area and bedrooms that are pushed towards the edges and are connected to each other through a series of galleries and terraces. The flow from interior to exterior space is not simply a spatial condition, but rather is an experience of materiality that creates a sinuous experience. The glass and steel make the house light, airy and open, and the stone allows the house to blend surrounding landscape of mountains and trees.

Inspired by Corbusier's visit to the Acropolis, this home is themed by its heiarchical transition from space to space. Each room in this home serves a particular purpose and is pushed towards the exterior while a large central area serves as the vestibule that collects and disperses light. Villa Roche’s interior makes use of a polychromatic color scheme – dark gray, lucid blue and pale sienna – in contrast to the entirely white façade combined with the asymmetrical arrangement of the Villa.

The Eames House was designed for the Case Study House Program. Composed of two boxes and a courtyard that connects them, the house has double-height spaces and few interior divisions that provide the integration between both environments. The interior space features a variety of furnishings, textures, and diffused light.

An unconventional progresion through space defines this home, as residents move from private spaces to a large social area that features expansive views of Lake Michigan. The signature Richard Meier white walls, geometric drawings and the use of large glass panels, contrast with the natural surrounding and establish a interaction between inside and outside with the change of season colors.

Despite the well-known controversy between a the minimalist interior designed by Mies rebelling against a more traditional space, desired by the owner, The Farnsworth House is one of the greatest symbols of the minimalist architecture in the world. The glass box integrates itself with the surrounding area and a single central core and modern pieces of furniture organize the interior.

The Maison Louis Carré organizes the private and social spaces in a series layers. As in several of his projects, Aalto combined in this one building, garden, furnishings and interior design, in which the furniture and lighting elements lamps were specifically designed for this project. 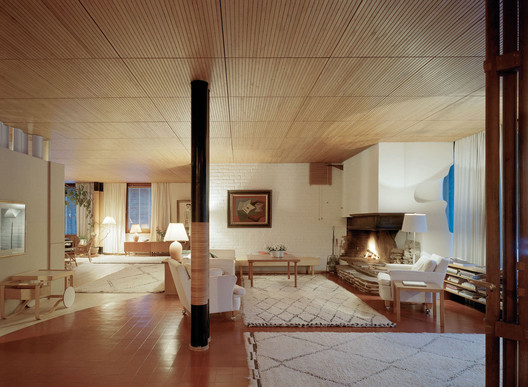