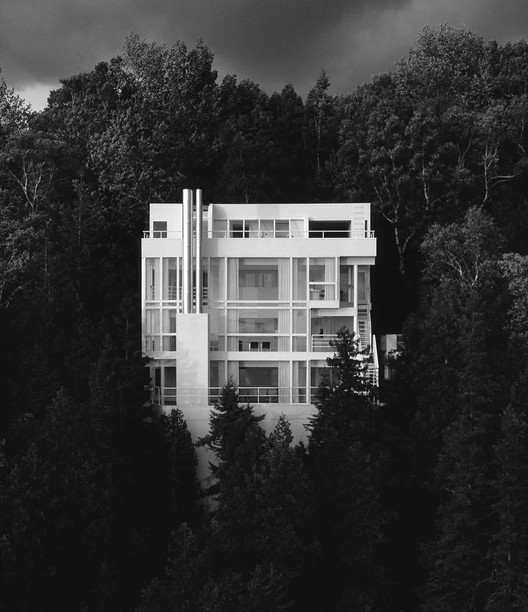 Text description provided by the architects. Hovering over the shores of Lake Michigan, the Douglas House was built by Richard Meier in 1971-1973 for Jim and Jean Douglas. The house is gently placed on a steep slope over the water, almost as if it is floating amongst the trees.

As Meier stated about the house, "So steep is the slope to the water that the house appears to have been dropped into the site, a machine-crafted object that has landed in a natural world. The dramatic dialogue between the whiteness of the house and the primary blues and greens of the water, trees, and sky allows the house not only to assert its own presence but to enhance, by contrast, the beauty of its natural environment as well."

Due to its location, Meier layered four floors and anchored the house into the hill.  The entry is on the east side of the house facing the road, which Meier considers the "private" zone and is expanded by a roof-level bridge. Once inside the entry vestibule there is a continuation to a roof-deck, and the living room and kitchen are seen two stories below with the fire place in view across from the entry, typical in homes designed by Meier.

The "public" zone of the house, including the living room and dining room, faces Lake Michigan and gives the impression of a completely different place when compared to the deceiving one-story entry space. The living room is open to the surrounding landscape with three large floor-to-ceiling windows, which was heavily used on the western side of the house to take advantage of the view. It also receives sunlight through a skylight that further separates the public and private zones.

The bedrooms were designed small and cabin-like, intimate for their private function. The layers of the floors are read on the exterior through these window mullions, and the interior public and private zones can also be determined depending on the number and sizes of the windows.

Circulation through the house is primarily horizontal with the open floor plans except for two staircases, one interior and one exterior, on the corners of the house. Their placement was intended in order to not interrupt the horizontal views towards the outdoors.

As is typical of Meier buildings, the house is completely white made with reinforced concrete and glass except for two steel pipes that extend from the chimney up to the roof, framing views at the entry level. The white of the house allows it to stick out as a man-made object on the landscape during the changing colors of the seasons, which can be experienced inside through the large glass panels.

These natural surroundings were also taken into consideration during the construction of the house where as few trees were removed as possible in order to leave the landscape in its most natural state while forcing the house to integrate with it.

After a three year construction period, the Douglas House was completed. Meier furnished the home with furniture designed by Le Corbusier, Mies van der Rohe, and himself, and when completed it needed no ornamentation other than the nature it was designed around. Meier's work enabled the house to extend with the natural horizontals of the shoreline, the lake's surface, and the horizon while following the pattern of the trees with vertical mullions, creating generous spacious continuity from interior to exterior.