Save
Hinterland From the Metropolis: Deciphering AMO’s “Countryside, The Future”
Share
Or
Copy

Entering the Guggenheim Museum, visitors find themselves surrounded by a feast of vivid colors and mismatched fonts. Passing the gigantic green tractor at the entrance, they move across the ground floor, littered with stickers, like a lunchbox, or a lid of a laptop. A thick pillar that pierces the internal atrium has become a garish advertising column. A bale of hay, a drone, and some other object (impossible to identify) levitate high overhead. A cardboard cutout of Joseph Stalin on robot wheels moves down the ramp, scaring off visitors. Big reflective letters say: “Countryside, The Future”.

Architect Rem Koolhaas, the founder of the Office of Metropolitan Architecture (OMA) and Samir Bantal, director of OMA’s internal think-tank AMO, created this utterly confusing environment to exhibit years of research on the space beyond the boundaries of the 21st-century city. 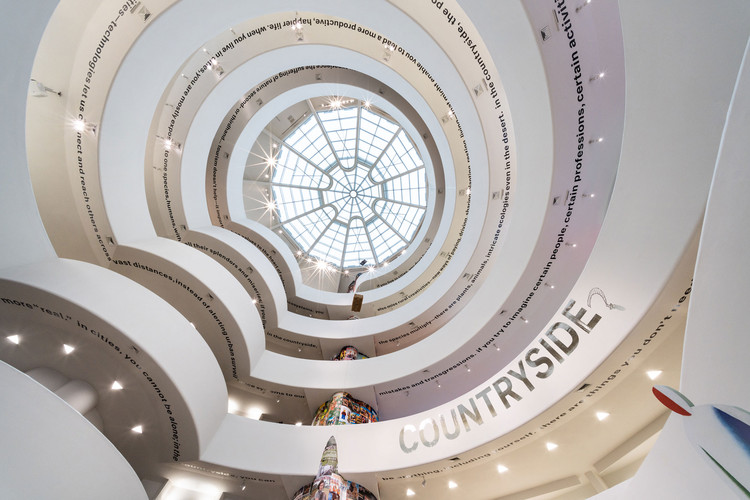 The basic argument of the show: while architects were busy fetishizing cities, the truly interesting transformation was happening outside urban areas. What has been occurring in the “countryside” – a term the curators themselves call “glaringly inadequate” – is exciting, inspiring, full of refreshing energy, and requires a closer look.

AMO / Rem Koolhaas Presents "Countryside, The Future" at the Guggenheim

The ambition of the curators wasn’t to fully describe the state of the “other” 98% of the globe’s surface. They did not aim to compete with academics: geographers, biologists, preservationists, or permafrost researchers. Instead, they produced a story tailored specifically for AMO’s core audience: architects. The radically linear layout of Frank Lloyd Wright’s museum – a narrow continuous ramp – allowed them to fully control the story’s narrative. As the viewers climb up the winding slope, they follow the carefully curated script step by step – as if it was a movie.

The show starts with a humorous diagram depicting two stacks of books. Their titles are well-recognizable for architects: these are the compulsory items on the shelves of any design office. Architecture’s bias towards cities is represented by the higher stack. The lower stack demonstrates the lack of curiosity towards 98% Earth which is the countryside.

Is it a critique of the abundance of urban research? Or is it Rem Koolhaas’ polemic with his own work? Manhattan of the seventies inspired him to write “Delirious New York”, and go on exploring cities in the following decades. “Junkspace” and “Generic City”, vivid descriptions of the contemporary urban condition, made Koolhaas a cherished figure in the world of architecture. His fascination with cities is evident in the name of his own practice: the Office of Metropolitan Architecture. Has Koolhaas just announced the end of his romance with cities, in the very heart of Manhattan, where it had all started? I’ve spent the whole day climbing up Frank Lloyd Wright’s ramp to answer this question.

The exhibition’s first act is a collection of historical case studies. Visitors learn about the Jefferson grid, which eventually became the blueprint for American economic development. They discover ambitious Soviet plans (which failed) to turn the steppes of central Asia into fertile agricultural lands. Technocratic agricultural policies of the European Economic Community are exhibited right next to the Nazi plans to link the Third Reich’s urban and rural areas with a web of Autobahns. Atlantropa – architect Herman Sörgel’s utopian vision to bring Europe and Africa together – is juxtaposed with desert mega-projects, initiated and partially realized by post-colonial Arab leaders. The latest historical case study comes from as late as 2017: Qatar’s centrally planned (and apparently successful) food security program.

From thousands of years of world history, the curators have carefully selected a narrow scope of projects: modern interventions on a breathtaking scale. They celebrate ambitious planning, grand policies coordinated between designers, experts, and politicians. In order to tackle large scale problems, like the looming climate disaster – the curators seem to say – one needs to have tools for a well-coordinated large-scale action.

Specific ideas of what exactly should be planned and coordinated appear in the following exhibition sections. One is devoted to new social structures. Another to novel models of nature conservation. Jumping erratically between continents, climate zones, scales, and themes, Koolhaas and Bantal created the most interesting part of the show: a Wunderkammer with heterogeneous and extraordinary “evidence of new thinking”.

Tiny plastic models reveal the nature of a contemporary Chinese village: part-standardized, part-technocratic, part-agricultural. Could it become a blueprint of a future suburban settlement? The Kenyan town Voi exemplifies an original model of urbanization, in which interconnected rural communities create a mighty network, instead of agglomerating into a Dubai-like megacity. The Mahjouba – a Moroccan artisan-made motorcycle – proudly proves that decentralized mass-production is possible. Is it an alternative for gargantuan new factories of China?

Revolutionary examples come from where no one expects a revolution: Europe. In the German village of Manheim, all forces that have been shaping the European politics in the last decade – the Energiewende, the refugee crisis, the new wave of global environmental activism – intertwined, and led to an implausible, and an utterly optimistic resolution. Italian towns Camini and Riace serve as examples of harmonious integration of refugees from North Africa into the physical, social and institutional tissue of ancient European settlements.

By the end of the museum ramp, the viewers reach the climax point of the show: a juxtaposition of already-existing sci-fi agricultural machinery, photographs of data centers completely devoid of humans, and diagrams of fully-automated agriculture. Cartesian grids meet unprecedented computational power; agriculture is cultivated by robots; full automation merges with a formerly unseen scale of architecture. Is this the future of the “countryside”? Will humans, bees and parking lots still be necessary in such a place?

A photograph in this final part of the exhibition depicts Rem Koolhaas visiting the Tahoe Reno Industrial Center (TRIC) – a colossal development, which serves as a backend space for the Silicon Valley companies. Portrayed from the back, like a character of a Third Person Shooter, the architect contemplates the hilly landscape, which is soon to turn into this overscaled project. In the catalog, the photograph is captioned: “The first inspection of TRIC.”

This very word – inspection –is the key that deciphers the whole show. Regardless of its title, “Countryside, The Future” doesn’t really put the countryside into the center of the attention. On the contrary, it speaks to the audience consisting of the likes of Koolhaas – metropolitan architects – while reducing the countryside to the role of a subject of their manipulation.

Koolhaas’ departure from the city, suggested at the beginning of the show, was apparent. “Countryside, The Future” is an architect’s query of what tools and design strategies could be useful in their work. In this respect, it recalls Koolhaas’ previous work: Cronocaos, Fundamentals, or SMLXL. Instead of inquiring about the fields of heritage preservation, finance, or standardization, this time AMO surveyed the vast space the architects indeed typically rather do not visit: the “countryside”.

“Countryside, The Future” treats the story of the countryside as an excuse to expand the boundaries of architectural discourse. This should not make the show an object for criticism: OMA/AMO are architects, and architecture is their primary field of expertise. The story of the countryside does an exceptionally good job, asking questions about the future of this profession. When the climate crisis is knocking at our door, isn’t it time to rehabilitate large scale planning? How can architects expand the boundaries of their profession? How can one reconcile economic growth and nature preservation? Most importantly: how do architects stay fully-informed and competent in a fast-changing world? For technology, digital cartography, grassroots social structures, electric bees, gorilla preservation plans, and distributed scooter assembly models all have a huge impact on architecture. And none should be overlooked!