Save
Modern Andorra: Architecture Between the Pyrenees
Share
Or
Copy

Wedged between France and Spain, Andorra is the sixth smallest nation in Europe. Less than 500 square kilometers in area, the landlocked microstate can be found in the eastern Pyrenees on the Iberian Peninsula. Today, new architecture is being built between Andorra’s rugged mountains and three narrow valleys that combine to form its Gran Valira river. 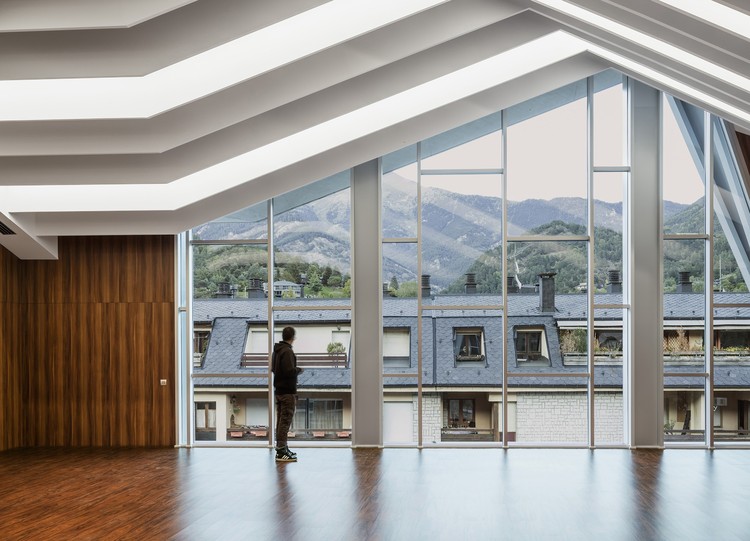 With roots stretching back thousands of years, Andorra’s culture is Catalan. Iconic structures like the Caldea thermal spa in Escaldes-Engordany stand in contrast with Pre-Romanesque and Romanesque structures and buildings. Geographically, there is a varied landscape of oceanic, alpine, continental climates that have shaped what could be built and local construction techniques. In turn, these remote conditions combined with limited transportation links to outside countries until the 20th century. The following projects showcase some of Andorra’s modern architecture built over the last decade across a range of programs and landscapes.

The new Illa mountain hut is situated in the idyllic surroundings of the Andorran Pyrenees. The context gives rise to the characteristic aspect of the existing construction built in the 30’s and whose comprehensive refurbishment and addition was the main objective of the project. The core difficulties the team faced were the interaction with the UNESCO World Heritage site, extreme weather conditions that only allowed work during the summer, and an enclave without road access.

Els Arcs ('The Arches') is a multipurpose building is in La Massana, Andorra. The local council, the Comú de la Massana, commissioned the building from the winners of an ideas competition. The plot is trapezoidal in form and defined by the alignment of two streets with a difference in level of 12 meters. The vertical communications core linking the two access levels, on the ground and fourth floors, provides a space where people can interact.

The puiet complex is a building composed by four different programmatic activities. Because of its dimension and complexity, the team aimed to obtain a better-scaled relationship with the urban context of the town of Ordino, and adapt the project to the different existent typologies. The volume of the building has been fragmented following its different activities, differentiating roofs, materials and façade depths.

Món Petit was designed to be a singular shop, not only for its premiere in Andorra as a sustainable space, but also for its expressive architecture. Retrieve, save, consider were the verbs that the team designed with in this new phase, and they aimed to demonstrate an open philosophy. Using a single item that can be reused, the team wanted to showcase and understanding of sustainability and natural recovery.

On the evening of a popular holiday in 1972, an ancient Romanesque Sanctuary caught fire and was destroyed. The building complex was left in blackened ruins, survived only by the original apse, vault over the altar and the bell tower. The two major elements of this project are the viaduct bridge and the Sanctuary, although other elements on the line are also symbolically important, including the concave amphitheater, the giant steps, the bridge over the road, the climbing towers, the vaulting arches, the esplanade, the convex theater, the fountain, and the sculpted colonnade.

Editor's Note: This article was originally published on February 18th, 2020 and updated on December 15th, 2021.