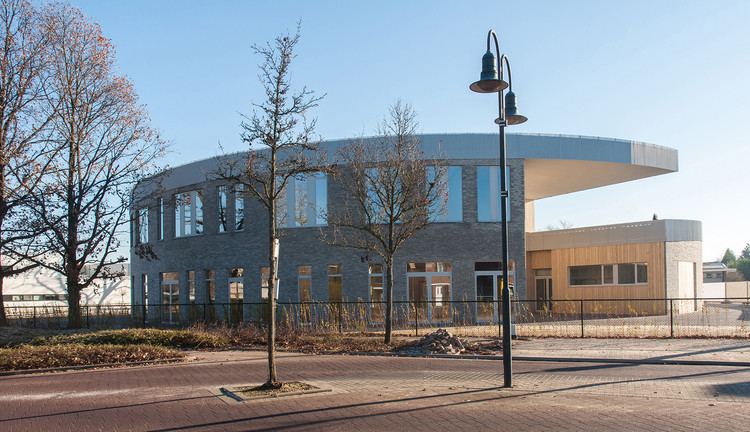 Text description provided by the architects. In its approach to visualizing education, this school fosters an ambivalence. First of all, there is the centric way of education and the concentric arrangement of the school around its pupils. The children are the focal point of the school and the building is literally constructed around them. In its architecture, it reflects the way of education whereby children and a sense of community are the main focus of the school.

Children are prepared for a responsible role in society. This connection to the outside world is reflected in the centrifugal arrangement of classrooms around the concentric common space.  It’s both concentric and centrifugal formal expressions that lend the new school an ambiguous identity.

Materials of the now-demolished educational buildings that used to occupy the site have been an inspiration for the new concentric school. Corrugated aluminum roofing is echoed in the ribbon that encloses the entire school. The light grey tone of the former school returns in the cement skin brick masonry of the new school.

Situated in a green area at the edge of Bocholt’s town center, De Brug is a so-called MOS school. It means nature and environmental awareness make an important part of education. The school consists of six classrooms, kindergarten and adjoining areas for team members, a lunch canteen and a large common area for playgrounds, meetings, exhibitions, and gymnastics. This is the heart of the school. A corridor with toilets and wardrobes encircles this heart. Each toilet group has its own color, associated with skylight colors in the common central space. It helps children to identify their own place and find their way around.

The school’s main entrance and central space are finished in Accoya wood cladding. A warm and tactile invitation from the heart of the school is the result. The tactile quality of the interior is announced at the main entrance where part of the brickwork was carved out and replaced by wood. The sense and color of the wood are continued into the central space. This wooden indoor space supplies an intimate and protective atmosphere. The center of the school is the huge, timber-clad skylight that balances on the concrete supporting walls. This skylight also forms a structural hub in the school’s roof construction. It is the void that casts daylight along wooden cladding, revealing clouds floating by during the day and letting in the starlight at night.

Environmental awareness is a key issue in this MOS school’s experience. The volume of the school was made compact in favour of more green space. Recycling and sustainability were introduced in an educational manner by way of water-saving measures, a compost heap, and other means. By making many processes visible the school building itself becomes an educational tool rather than just a shell.

The new building’s circular plan maximizes the perception of the surrounding green areas and offers sweeping views from the classrooms which all have individual access to outside spaces. The spiraling, sloping roof lends it an expressive quality that sets it apart from the green spaces. The roof spiral is broken at the main entrance and the peak welcomes children and visitors approaching from the town center. Maximizing dialogue between interior and exterior areas was an important design issue. An outdoor covered classroom was planned on the grounds. Also, there is an area on the grounds for environmental education, a vegetable garden, a herb garden, a compost heap and space for keeping animals such as chickens and rabbits. The educational aspect of the environment will be exploited to the full so that the school will function as a highly instructive green area.

The school building is constructed in such a way that certain areas can be used for after-school activities. The concentric central areas can be linked both to each other and to the canteen. This will permit a whole range of activities, including external use in evenings separate from the operation of the school. Thanks to the wide stairs that can also be used as a stage, it would even be possible to organize, for example, lectures, courses or theatre. In the spirit of a MOS school, activities of an educational nature could be organized for the whole neighborhood, borough or municipality, with the school itself as a role model and connection with the neighborhood and society.

The architecture of this school interacts with both the educational system, school children as well as the physical and social contexts of Bocholt. This dualism of the centric model of the school and the movement and development of the children towards the society are the basic vision of the primary school with a kindergarten. 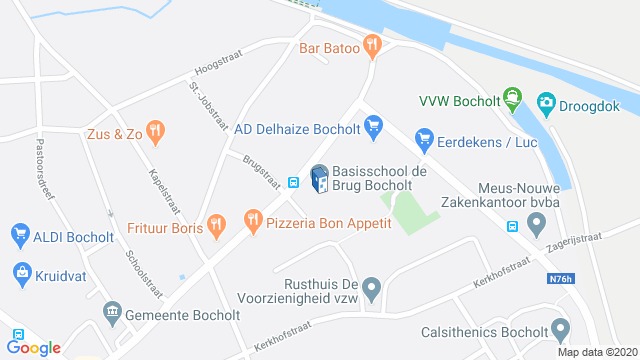 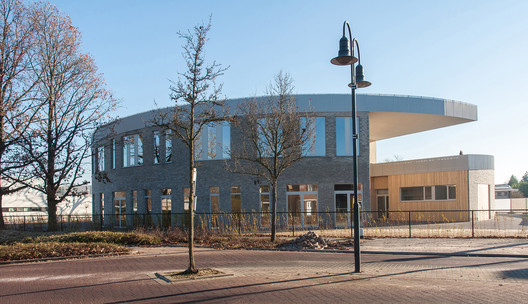