Save
Designing with Nature: Peruvian Homes Built for the Outdoors
Share
Or
Copy

Almost 80% of South America is tropical land. In Peru, close to two-thirds is covered by the Amazon rainforest, more than in any other country. These landscape conditions give rise to unique living conditions, and in turn, shape Peru’s contemporary architecture. Today, new homes are built to embrace nature and create space for everyday life. 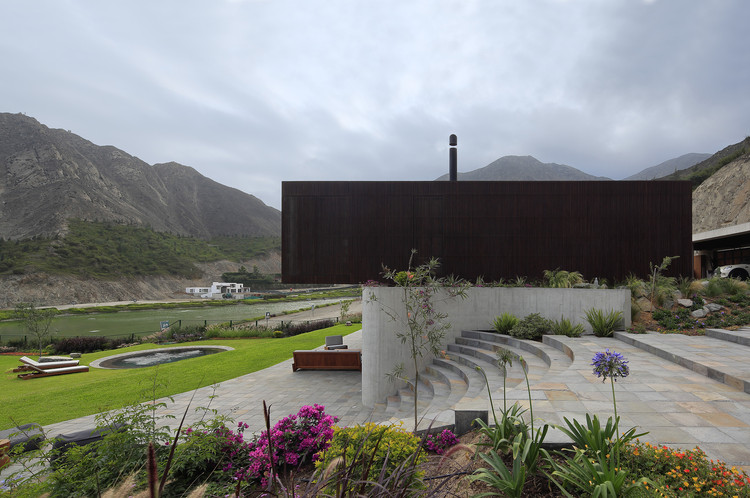 Like Peru’s cultural architecture, residential design is directly tied to the country’s megadiverse geography. With careful consideration of climate, topography, ventilation and sunlight, modern homes are built from an incredible range of environmental conditions. From the Andes Mountains to the Pacific Ocean, residences are sited among highlands, coastal plains, and the Amazon to the east. Here, architecture mitigates organic contexts through building envelopes and structural footprints.

Each of the following homes in Peru were designed to embrace natural conditions, taking advantage of views, orientation, and form. The residences are designed for human experience while respecting the patterns and culture of their surroundings. Inspired by the landscape, they are also a reflection of it. In turn, they represent diverse individual approaches to building by the mountains, forests, and ocean in a country with some of the longest histories of civilization in the world.

The main idea for this house was to create a controlled view inside the lot. The house is a small tribute to Mies Van der Rohe, especially where the transparency and the inner courtyards were held. The building has one floor at ground level to lighten the presence on the lot and then the team developed a basement with a corridor for bedrooms and service areas. The lot has a perforated platform that sustains the roofs and follows the same structural profiles.

Casa MEC is located in a diverse natural environment of large stone hills within a field on the outskirts of Lima, in the district of Cieneguilla. The main motivation of the project was that its inhabitants could enjoy and appreciate the natural stone hills. The rustic and rough character of the exposed rock was the result of demolishing the hill at the back of the house, which is what led to the selection of the material of the work- concrete faced with a wood boards texture.

This project was developed under the constraints given by the client and the extreme temperatures and climate of the city of Piura. In response to the client’s needs, a compact house was appropriate but in order to ensure the house remained cool in extreme heat, the team decided to turn the volume to be parallel to the longest side of the lot. From here, cross ventilation was maximized and the house was protected against the strength of afternoon sun. The result is an elongated volume in the middle of the plot which enjoys the open space from all the rooms within the house. The terrace is a contiguous space to the larger volume, thereby giving it a prime position to the garden.

Topo House was conceived with the premise of minimizing its impact on the environment, and looking for the house to be perceived smaller than it really is. For this, the lower level of the house (which contains the social and service areas) is semi-buried and it is given a rustic and organic treatment, since it is the level that physically relates to nature, while in contrast, the upper level, the one that contains the bedrooms, is considered as a pure block (completely covered in wood) seemingly resting on the ground.

ASIA House is a second home designed for leisure and socializing in one of the beach condos south of Lima. It posed the challenge of intensive temporary habitation and the opportunity to reinterpret a historical prototype: Maison Domino by Le Corbusier. The building standards for the small, semi-isolated lot of 15x8 meters only allowed the construction of single story house plus a roof terrace to enjoy sun, space, vegetation and the view over the desert landscape between the Isle of Asia and the coastal foothills of the Andes.

A House Forever by Longhi Architects

This home was designed for a young couple and explores ancestral contemporary architecture. Longhi aimed to interpret their dreams in order to create a “container of life”. The vision for the house was confirmed when the team went to the site for the first time and realized that it was already occupied by an old house where the couple was living with their two children. The project aimed to demolish the material but keep its spirit, in order to replace the old construction for a House Forever.

The premise in the development of this project was to always keep the views of the bay and the horizon present in every area of the house. The team needed to place the program so that the spaces would connect visually, and the transparency should be the primary axis of the first floor. A very strong constraint to the development of the project was the relentless wind that hits directly from the bay. This did not allow the team to use the front garden, therefore, they used the interior garden to see the sea at all times through the first volume.

This house is located in a temporary housing development near to the Paracas Natural Reserve overlooking the Bay. The particular climatic conditions of the place are solved by laying a solid base that serves as a barrier for the strong winds of the afternoon. This allows to generate at the interior a sheltered and private garden. The base volume contains most of the program of the house, and for each of these environments a small depth is raised in the facade for protection of the interior of the direct wind and to achieve an adequate privacy.

For this house, the team was interested in exploring processes where mass and light became the raw material for building a timeless container, which embraces a specific program and enters into direct communion with the site. The decision to live on the beach for seasons, involved a series of approaches that discuss a way of life that transits between private and public, and made the team wonder how to control that privacy and quiet without losing the concept of the spatial relationship between the interior and exterior.

Beach House I-5 by Vértice Arquitectos

Beach House I-5 was designed in the first row, plot 5 in Lomas del Mar beach in Cerro Azul, south of Lima. The plot is a rocky with a sandy hill in a half curved shape that reaches 48 meters high above the sea level and drops steeply. It has a 180° view to the Pacific Ocean to the south, and a panoramic view of the beach to the east and to the north. The two main goals to develop the project were to fully exploit the best possible view to the ocean from the social area, as well as from the master bedroom, and to make the most of the plot of land. 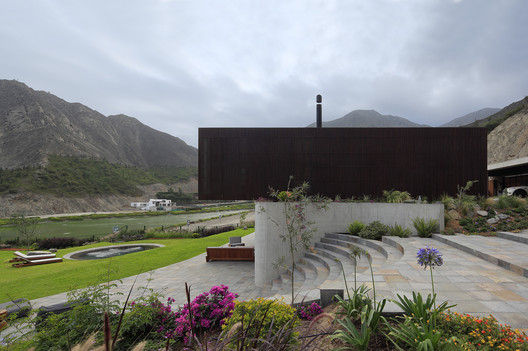