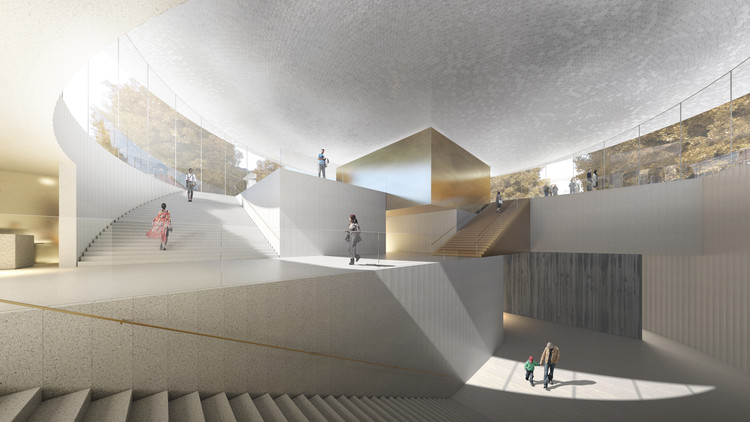 Initially designed by the trio Herman Gesellius, Armas Lindgren, and Eliel Saarinen, following a design competition in 1902, the existing museum, which opened in 1916, is “one of Finland’s finest examples of National Romantic architecture”. Located in central Helsinki along the city’s main street called Mannerheimintie, opposite Alvar Aalto’s Finlandia Hall and its parkland setting, the museum required some major refurbishment works. The 2019 extension needed to generate additional exhibition space; workshops; a new restaurant in the museum’s underused enclosed garden; and improved access including an inviting new entrance for the Museum.

The National Museum of Finland is a unique opportunity to explore inclusiveness in a building and we are deeply honored to have won the competition. Our entry, Atlas, reinforces our interest in how architecture can enable a sense of solidarity and belonging to a place. The National Museum is a place that belongs to everyone and anyone in Finland and we thought its extension’s architectural form should be universally understood yet encourage multiple interpretations. -- Samuli Miettinen, JKMM founding partner on the practice’s approach.

JKMM, one of the leading architectural practices in Finland, has a current total win of 47 competitions. Founded by Asmo Jaaksi, Teemu Kurkela, Samuli Miettinen and Juha Mäki-Jyllilä, the practice has completed over 50 projects around Finland, many of them involve working with existing buildings. Their latest project Atlas, puts in place a ”distinctive round disc-shaped white 1320 m2 concrete roof within the stone-walled garden of the Museum”. Simple in its shape, the new pavilion-like structure is independent of the original building, respecting the historic garden designed by Lindgren. Spreading over 5000 square meters including a 1200 square meter exhibition space, Atlas can accommodate up to 1200 visitors.

We wanted to create a building that will enhance visitors’ experience by improving the way they are received and the overall circulation in the Museum. As in most of our projects, we wanted people to be able to find their way intuitively minimizing the need for signage and to also discover and enjoy the nearly forgotten Museum garden. […] An essential consideration for us on ‘Atlas’ was to keep the impact of the new building at ground level to a minimum and to place its bulk underground thereby enhancing the role the enclosed garden will play in the future of the National Museum of Finland. -- Samuli Miettinen, JKMM founding partner.

With a subtle presence in the city, the white addition holds under its concrete structure, on the ground floor, a restaurant that can be used independently of the rest of the Museum, with glass curved walls that create a floating roof aspect. A stepped covered public square “welcomes visitors and leads them to the new exhibition galleries and other spaces”. Moreover, on the abundance of light in the space, the architects state that it “plays an important role in the design and highlights the materiality and three-dimensional qualities of the architecture, both in keeping with those of the original museum building”.

The name “Atlas” refers to the idea of carrying our history and culture with us. The suspended concrete roof clad in ceramic tiles has a celestial quality but it is also a metaphor for the world or our shared legacy. -- Samuli Miettinen, JKMM founding partner 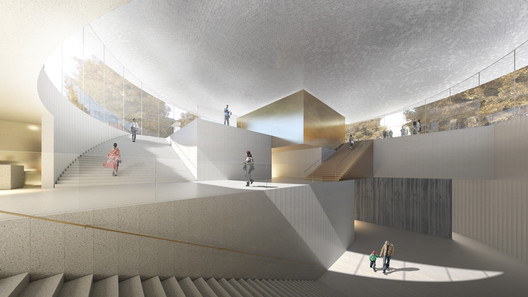