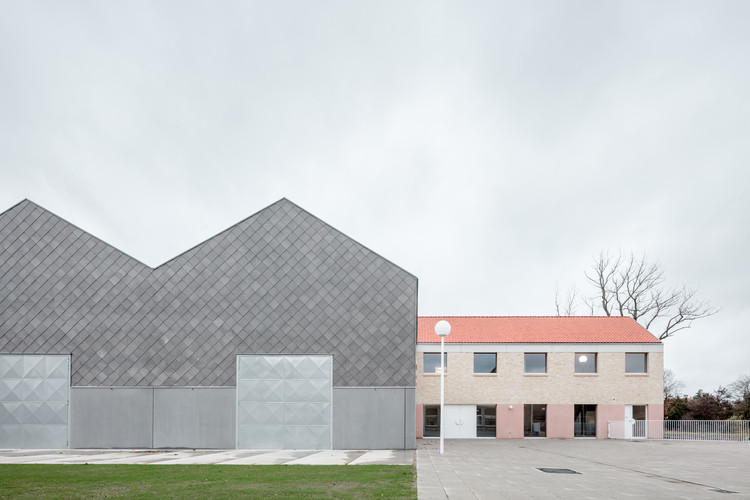 Text description provided by the architects. In 2014 FELT won the competition for a new primary school and sports hall in Zarren (BE). The site is located close to the village’s center and behind an existing 1920’s nursery school. The new school marks the intersection of a small residential area and the surrounding meadows. The new building aims at blending in with its surroundings and is designed in tune with the adjacent nursery school. A compact two-story volume with pitched roofs is positioned in a way it maximizes the open space. Thus creating a big playground that can extend in a public square.

The facades mimic in a collage-like way the somewhat unremarkable materials of the surrounding houses: Brick, soft pink and gray concrete and fiber cement slates. The ceramic roof tiles are subtly lined by a playful serrated roof trim. The building itself is characterized by its rational and economic structure consisting of two wings connected by a central hall. This renders a clear and straightforward circulation scheme. The west wing is directed towards the landscape and contains nine classrooms. The other wing houses the more public functions such as the cafeteria and the sports hall and is directed towards the playground and the town.

A sculptural staircase with walls and ceilings in pink concrete forms the heart of the building. It acts as a central meeting point and connects the class corridors with the sports hall (floor level) and the cafeteria (1st floor). The pitched roofs are strongly tangible in the interiors. The colorful green sports hall and overlooking cafeteria flow into each other with their ceilings meeting in a single round column.

Dressing rooms can be found below the cafeteria, the sports hall has two big gates that provide a generous connection to the exterior playground in case of nice weather. The overall ambition of the architects was to create a light, transparent and homely atmosphere throughout the whole school with large glass partitions separating the corridors and classrooms. An extraordinary place to teach, learn and play. 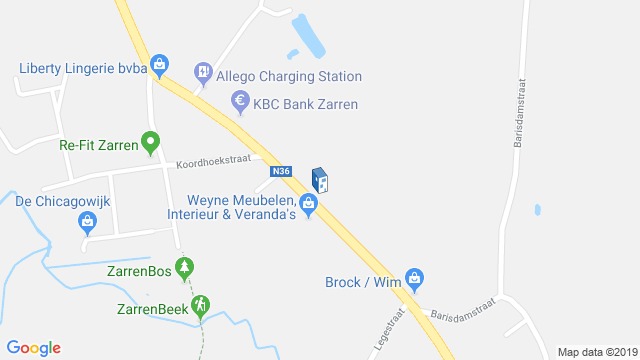