In 1782, Bangkok became the capital of Siam – as Thailand was previously known. Its strategic position within the protective curve of Chao Phraya River to the West and the vast, swampy delta of the Sea of Mud that secured the city to the East was key. King Rama I modelled the new city on what had been the urban reference of Thailand since the 14th century: Ayutthaya, which by 1700 had become the largest city in the world with a total of 1 million inhabitants.

Bangkok progressively saw the construction of temples (wats), schools, libraries and hospitals. However, few other typologies were erected and the city lacked significant paved streets. Instead, the river and a network of interconnected canals served as the transport infrastructure of the city. With time, the floating houses anchored along the riverfront decreased and the pavements spread.

If the 20th century saw the creation of more pavements, public parks and universities, the 21st century has brought luxury condos, offices and shopping malls. Whilst the past 100 years have left behind some questionable architecture (such as the Robot and Elephant buildings, yes), it has also seen much improvement of the public realm. Architecture that uses the past to project the future and that takes its legacy into account to create new forms that respect and enhance what makes Bangkok such an interesting city.

This list focuses on the latest additions to the capital so you can analyse where the city is heading. I've included remarkable examples of social and private architecture, which use local materials and integrate the landscape and other vernacular elements of Thailand.

Amanda Levete Architects have been opening a series of successful buildings across the world: The new access at the Victoria and Albert Museum in London, the MAAT Museum in Lisbon and this mixed-used building located within the former gardens of the British Embassy. The tower integrates luxury shopping with the Park Hyatt hotel in one structure that is asymmetrical in all dimensions. The tower is the first to be completed by a British architect in Thailand.

Bangkok University consists of two campuses: Klong Toey and Rangsit, being the latter the newer addition to its portfolio. The Rangsit Campus – where you'll find the undergraduate students – was in need of reorganisation as the main road wasn't addressed and it lacked proper entrance gates. This diamond-shaped complex of buildings provided a front face to the campus while increasing the space for the School of Business Management. The new buildings emerged from the particular architectural form evoking the symbol of the university, a diamond.

Arnun Wattanaporn, a young barista that has become an eminence in Bangkok's coffee scene, has launched Kaizen coffee co.'s a new home in Ekamai, one of the prime locations in the heart of Bangkok. Unlike the previously owned Kaizen branches, Wattanaporn aimed to enhance the essence of coziness rather than a typically modern and minimal café atmosphere. The natural finish oak woods and dark grey bricks were opted as the main materials.

This dazzling, pixelated 77-storey tower briefly held Thailand's tallest structure until Iconsiam (designed by Urban Architect Co) broke the record in 2018. The main feature – its façade protrusions – were created to protect its inhabitants while revealing the inner life of their city. Ole Scheeren, the partner of Office for Metropolitan Architecture (OMA) that was in charge of the project, recently gave a TED Talk that you should watch if you want to better understand this project: Why great architecture should tell a story?

6. Glasshouse at Sindhorn / OFFICE AT

This interesting addition to a previously existing office block of the 80's revolves around a noble concept: the preservation of a huge tree. The old building, which already went through major expansions, has created this new front with the intention of having a spectacular new image. The new addition has 4 fine dining restaurants with mezzanine floor and one small cigar bar all over a roof that creates the illusion of being under a tree.

EmQuartier Bangkok is known for two reasons: its luxury shops and its manmade waterfall within the huge atrium. In addition, the building features an open air garden on the fifth floor, dining terraces sitting atop a helical floor slab, an eight theatre cinema complex and two stories of underground parking. The architecture firm founded by Thomas Leeser completed 60 Water Street near Brooklyn Bridge in the same year. Read more here.

LiT Bangkok is a hotel on a strange plot of land. It's 200 meters away from sky-train, a block away from an art museum and several shopping centres and on its immediate surroundings, the site is bordered by shop houses, back-packer hotels, and street vendors. The L-shape result aimed to attract the passer by whilst protecting her in its comforting inside. Therefore, the façade’s pattern design (made of a series of parallelogram aluminium composite module) was created with these two goals in mind.

This is an early project by WOHA, the Singapore giants founded in 1994 by Wong Mun Summ and Richard Hassell (WOHA). The Met was designed as an advanced form of high-rise living for the tropics, developed from a local point of view and not from western temperate models; hence having in mind the possibilities of low-wind and tropical climate in dense urban conditions. In fact, this project implemented several ideas developed originally for a competition in Singapore for public housing that have resulted in quite a successful building.

The building transformed an existing shophouse into a vibrant showroom and office for a lighting company and its products. Converting this building type to provide the required new retail functions was challenging and it required extensive modifications to the interior layout. The resulting approach involved inserting new spaces that would connect all the existing floors and provide continuous circulation. The development of the exterior facade followed the interior modifications.

Office of Lee & Son Leather recently opened its brand new offices in Bangkok whose black curved façade resembles a leather belt. ASWA (Architectural Studio of Work - Aholic) designed their new headquarters from the conceptual product’s image and identity. The 2,000 m2 project consists of 4 floors, where the first level is occupied by parking lots.

Located in the city’s prime central business district – and just a few blocks away from AL_A's Central Embassy – this hotel is the most recent project in Asia by American firm KPF. The luxury hotel’s design is inspired by the graceful hand movement of the wai – the simple and elegant Thai gesture of greeting and welcome. Not only culturally representative, the sloping of the building also creates terraces, diminishing floorplates, and distinctive occupiable spaces as the tower rises. Two connected high-rise structures meet to create a central atrium with lush, vertical gardens and a dramatic indoor waterfall, evoking Thailand's famous caves.

Founded in 1912, Alliance Française (AF), is the leading institute to promote French art and culture in Thailand. In designing a new cultural center for AF, Stonehenge created a 6-storey building accommodating 3 main functions: Art & Culture, academic program and office space. The atrium – the main feature of the building – allows the natural light to the inner space while also providing a set of staircases that encourage people to walk through.

The Bangkok Art and Culture Centre project originally began in 1995, however, it quickly came to a halt when a new governor was elected in 2001. It was not until 2004 that yet another governor was presented the original plans for the centre that it finally took off again. Over a decade later, the centre was built. This social gathering spot has been both defining and generating culture in Bangkok since it opened. Read more here.

For a biker like me, this concrete and glass showroom was a must visit. The main sculptural concrete forms were inspired by the motorcycle’s 'hugging the curve' transition, which represents the winning moment of racing motorcycles on the racing track. Two boomerang shapes engaged one another in plans and sections. The first one vectors its circulation from main entry through café at ground level upwards; whilst the other directs its path from mezzanine lounge/conference to the ground level downwards. Read more here.

Naiipa – meaning ‘Deep in the Forest’ – is a mixed use project consisting of an art gallery, sound recording studio, dance studio, restaurants, coffee shops, and office space. The project is named after the concept of concealing the architecture in the forest as the vision of greenery is expanded by using reflective glass all around. Upon arrival, visitors are greeted with the project’s main feature: a building that seamlessly co-exists with the trees.

A refreshingly non-luxurious hotel in Bangkok with high standards. KLOEM hostel was created in an already existing office building in much need of refurbishment. The main design approach for this project was to design this space based on as much as possible existing structure and material by focusing on 'repairing' and 'adding'. Firstly, the existing structure was kept as it was and secondly, a new smaller building was added. The result? Quite impressive.

Groove at Central World, a 2-storey retails space, was to be created on top of an existing parking building in the prime area of Bangkok. What's really interesting about the project is the detail to pedestrians and streets, which in Bangkok are permanently occupied by street vendors resulting in blocked routes and a significant number of accidents every year. As a result, Groove at Central World made the pedestrian routes and pathways the main feature of the project.

20. The Commons / Department of Architecture

The Commons, a small retail development in the city center, is an attempt to create a new active outdoor space where people can comfortably enjoy it at anytime of the year. Bangkokians are now yearning for new possibilities of outdoor living space that can effectively answer to the tropical heat and its dense living condition where there is not much space for the outdoor. The Commons proposes a vertical open-air public space folding upward as a backbone of the building.

The Hard Rock Cafe in Bangkok marks a new approach for the venerable Hard Rock brand. Designers Architectkidd and Prinda Puranananda have completed the new restaurant with focus on connecting music and architecture. The starting point of the project were the shapes, rhythms and structures of sound. Their interpretation to physical forms and materials in the new design was the result of a creative collaboration that combined a variety of disciplines from design to branding, furniture and street art.

Thailand Creative and Design Center (TCDC) is a government agency with a mission to inspire creative thinking in the society and to propel the country’s creative economy.  It provides a broad range of resources and services. The main components are a design library, a material library and a co-working space. TCDC moved to its new place within the historical Grand Postal Building in 2017 and a new interior was designed to reflect the agency's mission. 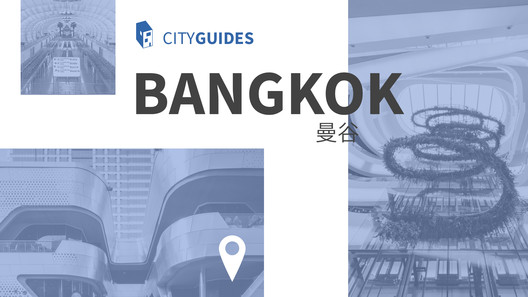