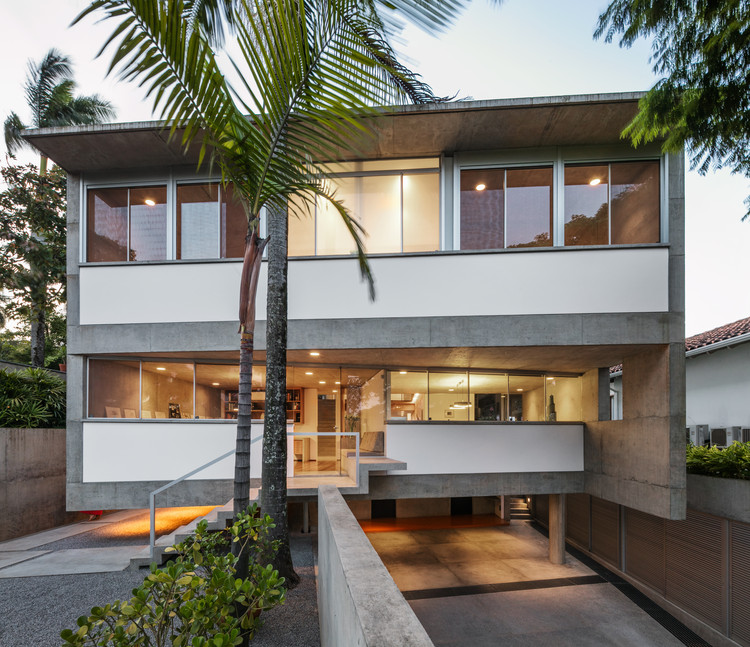 Text description provided by the architects. This house was built next to Milan House, and is integrated with it. The plot has an area of 603 m2 and approximately 15 meters in the front by 40 meters depth. It had previously been occupied by an old residence built in the 50's, located one meter above the street, and about 3 meters below the level of Milan House's main floor. Thus, the new house implanted in this pre-existing terrain came to be organized on a foundation with a basement and a forward pilotis. This allowed its floors to adjust to Milan House's main floors, and also to the street.

This house’s main facade is not the front one, for the street, but the side facade, which along Milan House’s border, incorporated its beautiful 42 year old garden, and a large swimming pool. It is the scenery the reason for contemplation for anyone inside the new house. Pre-existing backyard became a real square, place of conviviality between the two houses.

The main passage between the two houses is made through a cantilevered bridge launched from the containing wall. It arrives at a real Loggia, transition space inside-outside, and main access. It arrives at the landing of the main staircase that runs through the double-height central space.

The central space organizes the house program: on the upper level, two bedrooms facing the street to the east, and the master bedroom facing west, to a patio in the backyard. Parallel to the staircase, on the other side of the central space, a linear mezzanine, the family-room, is where the tropical landscape unfolds, with many trees, imperial palms and the large water mirror reflecting Milan House’s curved roof.

The ground floor has a fluid and continuous space, with living spaces incorporating the large central space and leading to an open patio, and then to a recreation area.

Reusable rainwater catchment basins occupy the transition space between the two houses, below the Loggia. They feature the main house access for those coming from the street. It is a very pleasant space, with shade, fresh and humid air, that helps a lot in the natural air conditioning of the house. In contrast to this space of shade and water, the back patio is dry, bright and paved. With its small orchard and barbecue facilities, it is the place for the children to play and for outdoors social gatherings.

The characteristic spatiality of this house, with varying ceiling heights, was enriched in the plans design by the superposition of orthogonal constructions rotated to 150. From the basic parallelepiped, parallel to the site sides, an inclined axis, perpendicular to the street, directed the superposed stairs, in the most efficient positions on each floor, and gave rise to varied spaces, with the dimensions and proportions adapted to their uses. For example, at the Loggia the large curtain-wall resting on the main staircase has at its highest part the greatest distance from the roof, with greater protection from the sun and the rain; or, the facade of the studio in the backyard, opens the courtyard more to the north and to the view of the city; or, on the pilotis, from the street, from the gate, the space widens towards the shelter, more comfortable to park the cars, etc, etc. 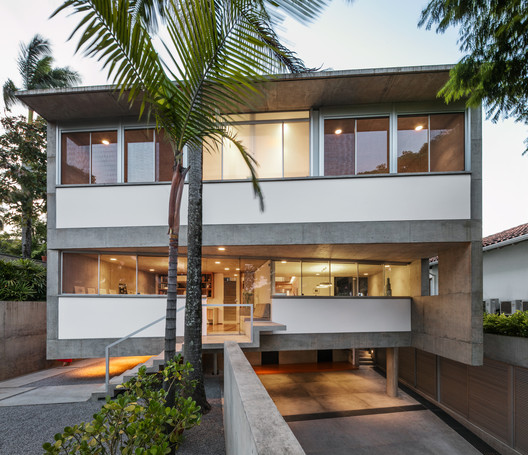