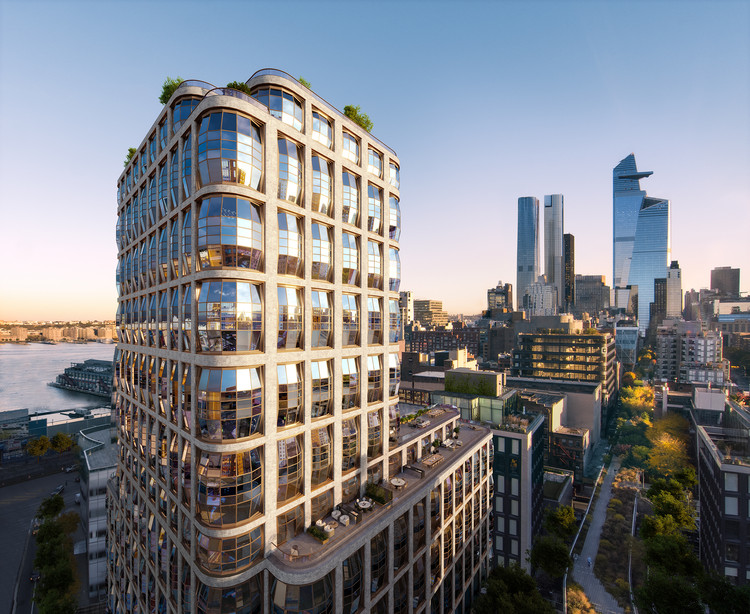 The project, adjacent to the city's famous elevated park, revealed last year, has had its name changed. Called “Lantern House”, because of its concave lantern-shaped glass openings, the residential development, currently under construction at 515 West 18th Street in Manhattan, includes 2 towers, 10-story, and 22-story high. The massive windows allow natural light and views of the surrounding. On another hand, the two buildings are connected together through a glass bridge beneath the High Line. Blending in the Chelsea neighborhood, the façade’s cladding is reminiscent of the industrial aspect of the area. The latest renderings of the residential towers showcased new design details, and interior shots introduced simple contemporary finishes.

For our first residential project in North America, we wanted to design something that is interesting to look at and could be part of the view […] People love to live in memorable places. For Lantern House, it was important that our design feel rooted in and of New York as much as possible. When Lantern House residents return home, we want them to feel like they are returning to a place like no other. -- Thomas Heatherwick, Founder of Heatherwick Studio.

Comprised of 181 residences, state-of-the-art amenities, as distinctive from the inside as it is from the outside, Lantern House’s interiors were designed by March & White, the international design studio founded in London by Elliot March and James White, complementing Lantern House’s distinctive architecture.

It all started with the architecture as we worked closely with Related and Heatherwick Studio to define the story of Lantern House. It was important for the interiors and architecture to have a conversation that incorporated the history and energy of the location and neighborhood […] We collaborated closely with Heatherwick Studio sharing ideas throughout the design and development process to bring creativity and materiality into the interiors. The holistic design connects a distinctive façade with a heritage interior. In all ways, Lantern House is a building filled with character. -- James White and Elliot March

Inspired by the history and views of the neighborhood, Heatherwick Studio designed Lantern House from the inside-out creating a one-of-a-kind collection of residences along the High Line […] The timeless architecture, with its signature modern interpretation of bay windows, inviting interiors by March & White, and Related’s signature amenities and services will create unmatched homes in the heart of West Chelsea. -- Jordan Sasson, Vice President at Related Companies.

Although it is Heatherwick's first residential project in the US, the designer has already made a big impact on the New York skyline, with his very famous Vessel at Hudson Yards. The High Line’s facades are also being developed, with a series of projects built on its sides, like Studio Gang’s latest tower. 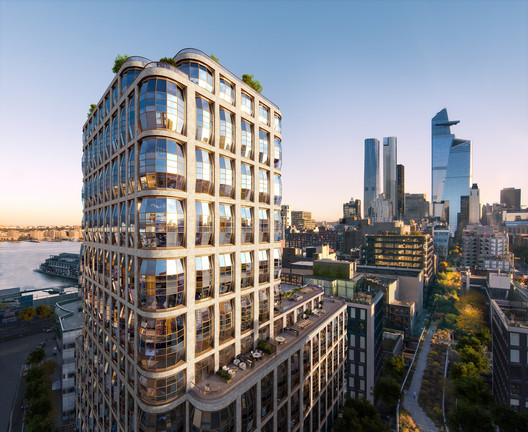