Save
“Mario Botta: The Space Beyond” to be Revealed in NY in mid-October
Share
Or
Copy

"Mario Botta: The Space Beyond" is a 78’ architectural documentary on the life journey and works of internationally-acclaimed Swiss architect Mario Botta. The film, which provides a glimpse of the person behind the architect, is co-directed by Loretta Dalpozzo and Michèle Volontè, and produced by Swissbridge Productions.

On the 16th, 17th and 19th of October, the documentary will be screened in New York during the Architecture and Design Film Festival, in the presence of the architect himself and the directors. The film will also be screened during the upcoming Rotterdam Film Festival, Beirut Art Festival, Artecinema film festival (Naples Italy), Milan Deign Film festival, and ADFF in Toronto and Vancouver.

The film explores Botta’s ever growing curiosity and reflections on the contradictions of society. The Swiss architect is one of the few who has designed places of prayer for the three main monotheistic religions, having designed churches, chapels, a synagogue, and recently a mosque in China.

The documentary has already been screened in the UK at the Royal Institute of British Architects on June 25th. The event took place during the London Festival of Architecture, and was produced in partnership with the RIBA and the Swiss embassy in London.

26 October : in a competition at the Design Film Festival di Milan in Triennale 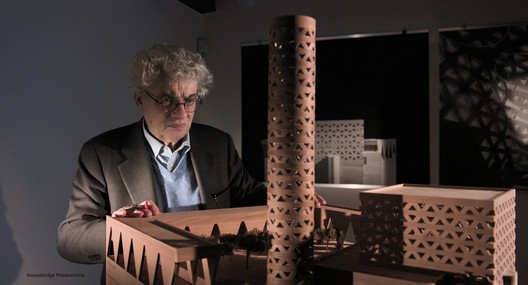