Save
TOTEMY: Visualizing the Relationship Between Human and the Forces of Nature
Share
Or
Copy

Architects and designers, just like all citizens, have a responsibility to participate in global conversations regarding the environment. Their power, however, lies in the fact that they are able to make an impact through the conscious decisions they make with their projects, such as sustainable building materials or expressive artworks.

To shed light on the current climate crisis, artist Alicja Biala and architect Iwo Borkowicz have created Totemy, a series of 9-meter-tall sculptures that translate the state of the environment into an immersive architectural experience. 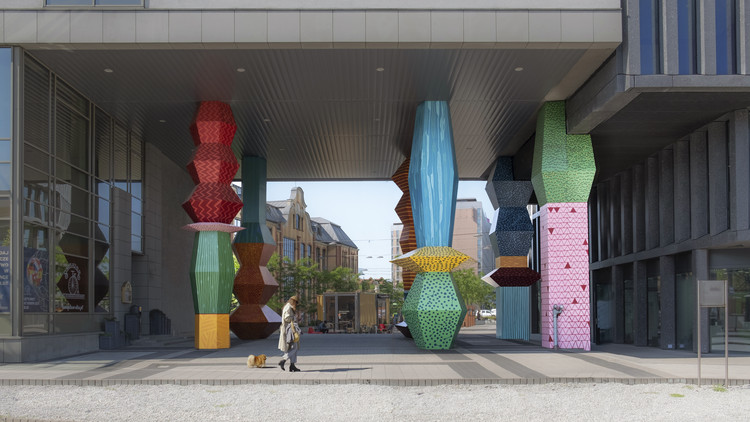 Biala and Borkowicz built the sculptures beneath MVRDV’s Bałtyk Building in their hometown of Poznań, Poland. The duo chose a public space instead of museums, galleries, or conventional art spaces to be able to reach a wider audience, addressing the public at an everyday level.

The colors and forms were hand-made by Biala, with help from local wood-workers, students, politicians, activists, and other community members.

Each pattern and form is a translation of an environmental statistic or study, which the artists made sure were as accurate and verified as possible. For example, a sculpture of two big volumes resembles deforestation: one volume represents the size of annual global forest loss and the other volume the surface of Poland. Although the final forms are rather abstract, but their meaning can be further explored by the QR code scans printed on each sculpture.

“The process of climate topic selection and form-giving was a long and dynamic. We knew digital media would have to play a part in the communication of the statistics behind each sculpture. After all, it is a part of our everyday. We wanted the pieces to be expressive, but objective and factual beneath the surface.” - Iwo Burkowicz

The message behind the installation was not an attack, but rather an invitation for discussion and public consciousness. So far, the totems have gained a lot of popularity and awareness on social media, inspiring the artists to create similar pieces in other cities and countries around the world.

“We were pleased by the response from the local community and abroad; it shows a growing public concern in climate change. This is particularly important within the state of discourse in Poland where many politicians and public figures manifest climate ignorance, like Polish President Andrzej Duda, who has a rich climate change denial history. The thing is that our totems are designed to represent science; you may discuss with me, but you cannot argue with facts.” - Alicja Biala