Traveling around Japan can be an impressive experience for a Western tourist - especially if they have some connection with architecture. In addition to the huge cultural differences, the country is known for its rich architectural production - eight of the 42 Pritzker Prize laureates are Japanese - which has maintained its consistency since the 1960s.

In the book Japan Diaries: Architecture and more, by a+t architecture publishers, Aurora Fernandez Per and Javier Mozas travel around various regions sharing a broader and subjective image of the country. A mixture of a travel diary and a catalog of buildings, the volume brings together some of the most exciting projects built over the past few decades in Japan's largest cities.

Following are the buildings visited in Tokyo and its metropolitan area, along with brief descriptions of the works by the authors.

"Kisho Kurokawa prioritizes the relationship between an individual and the metropolis over other sentimental or family bonds. He preached about life in solitude amidst millions of solitudes - the Japanese government estimates that by 2040, 39% of the population will consist of single people - yet his projects show an overwhelming appreciation of the architect's power".

"In the midst of this web of traffic flows, Tange's tower appears largely on the corner of Sotobori Dori, in Ginza. The protrusions are suspended above the expressway, neglecting what happens at ground level. The supporting structure is so monumental that the office modules seem disproportionately shrunk, like small koalas embracing the trunk of a eucalyptus tree".

"Hillside Terrace is the miniature version of a city and took over thirty years to be completed. Featuring low buildings, interconnected public spaces, walls, passageways, and vegetation".

"The dematerialization of the façade, which gives the first impression of fragility, is balanced with the rest of the building volume, which becomes tighter the further into the lot".

"The space of the square penetrates the ground floor through rips that reminded me of the curtains that hang at ramen bars. The penumbra of these openings contrasts so greatly with the aluminum that it transforms them into intriguing fissures".

"The capsules were assembled in parts on a metal structure. These are not prefabricated three-dimensional modules, but façade panels and slabs attached to the structure".

"You wonder what came first, the shape or the program. The land is so compromised that the house looks like a child in the subway, afraid of being crushed at rush hour".

"That - Ryue Nishizawa must have thought - is what I want: a new landscape and a freer housing, which proposes uses rather than adapting to old standards that no longer work. What is communal and what is private flows according to the will of the users, in a specific way, in time rather than in space".

"A minimal universe, a city haunted by concrete walls, indifferent to the operations of the elevated train and the shopping hubbub that surrounds the Okurayama station. It's a curved and narrow world, where the uses are mixed, entwined in the lives of its inhabitants".

"The building seems to dominate the hill, reminiscent of a virtual image. Only the accesses, with their mundane elements, bring me back to reality. I have no words to describe the feeling that this building has caused me. Any doubt simply disappears".

"The forest of pillars becomes thicker or thinner between tables and workbenches. A white glider, suspended from the ceiling by cables and pulleys, camouflages itself within this artificial forest. The vegetation scattered throughout the room seems to adapt well to this environment. The glass is so transparent that the outside trees seem to be inside, becoming part of this constrained nature".

To learn more about the book, visit the a+t architecture publishers website. 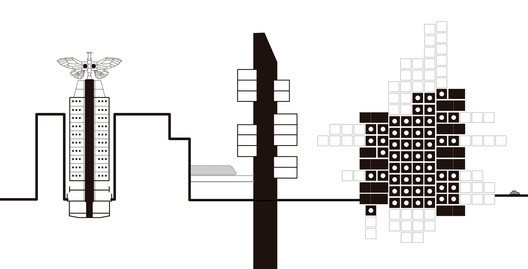