China seems to be at the peak of a refurbishment fever. Not only hutongs in historic downtowns, but abandoned industrial factories are becoming new tech or cultural hubs, and even buildings in the risk of collapse are refurbished to extend their lifespan. Why is this happening? Who is investing? How could this happen in a country where you cannot buy properties?

In this edition of Editor's Talk, our editors from ArchDaily China share their thoughts on how in a fast-paced development process, such as the one China is going through, there is a refurbishment fever in its biggest cities.

Nicolas Valencia: What’s happening in China that Use & Reuse seems to be a hot topic right now?

Han Zhang: There are several reasons for this being a hot topic. The most important one being the slow down in release of land for development by the government to developers. In first-tier cities, there is no longer any public land being released for development, driving the market towards the refurbishment of the existing building stock. This is probably a reason that most people outside of China are unaware of. There are many motivations for this from the perspective of the government: cooling the housing bubble, lack of land in major cities, facing the serious issue of the low-quality building stock in China from the last 50 years.

Shuang Han: In the last 70 years of China, many old buildings were built, and they are facing damage problems now, so renovation projects are very popular in the city and countryside.

Milly Mo: Yes, I believe it is partly because of the fast-paced development going on in Chinese megacities since the 1980s. A lot of outdated buildings lack of quality need to be replaced. Architecture built in the 80s and 90s could not catch up with the fast-growing economic development in the cities, therefore there is a lot of renovations going on to satisfy the new functional needs.

Han Zhang: Whereas buildings in the west are usually designed for 100-200 years of use, most buildings built after China's opening up were built for 30-50 years of use. Therefore, we are now facing a large portion of the building stock in danger of collapse.

Further, as China moves away from heavy industry, a huge amount of industrial sites are being abandoned. Following the international trends towards repurposing industrial sites, the Chinese government and developers are seeing the potential in this market segment.

Milly Mo: Furthermore, the regulations of buildings were not as complete back then. Therefore some self-built buildings built in the 80s and 90s are on the edges of collapsing.

Nicolas Valencia: Who is investing in those buildings with a risk of collapse?

Han Zhang: I think it is a natural progression for the general public to yearn for some individuality in their personal lives, whether it is in their homes, offices or leisure spaces after growing up in a country where being "the same" was the preferred status.

Milly Mo: Mainly developers, while the government decides to re-develop the areas with collapsing buildings. Developers rushed to bid for the sites because there is a huge potential for profit due to the appreciation of land price. They would buy out the collapsing buildings and do a complete demolition and reconstruction progress, yet nowadays more and more architects choose to renovate small scale risky buildings as experiments.

Han Zhang: Also, as more and more Chinese architects return from studying abroad, they bring back new knowledge and exciting possibilities for the built environment for the general public. This together with the power of social media and television has been able to open up people's perspectives on what is possible for their own spaces, big and small.

Shuang Han: Adaptive reuse allows cities to take a second look at old spaces, especially those that are abandoned or located along with struggling, industrial waterfronts. It can also be a key way to preserve historic space and reduce urban sprawl, the government awards this problem and thinks the reuse will be very profitable. Also, architects are addicted to discovering the cultural values ​​behind historic architecture.

Nicolas Valencia: Shuang Han brought up the current addiction to the cultural layer on refurbishment. Is there any cultural narrative behind this?

Han Zhang: At first there were architects and artists who saw the cultural significance of these old buildings. It was through their renovations that the public caught on.

Milly Mo: I believe architects are drawn to the renovation of industrial factories and spaces because it is a very rare chance for them to experiment in such a big space. Due to the density and the cost of building on a large scale, most architects wouldn’t have the chance to design a completely new megabuilding. Therefore, they focus on these renovations. After all, it is cheaper to renovate than to build from ground zero. Also, a lot of architects are simply fascinated by the historic value behind an industrial building, as it symbolizes the harsh old days in the mid 20th century.

Nicolas Valencia: Do you identify any difference in this process in the biggest cities or in regions in China?

Shuang Han: Reuse architecture is the process of repurposing buildings that have outlived their original purposes for different uses or functions while at the same time retaining their historic features. So I think there is no big difference in the reconstruction of the North and South.

Han Zhang: We need to explain the time and relevant social and cultural shifts in the last 50 years so the readers understand how refurbishments work in China.

The first cases of the refurbishment of old spaces happened before central and regional governments had any policies towards this issue. Individuals or small developers saw potential in old spaces such as factories and storage facilities and brought lease rights to the properties in the hopes that they will be of value in the future — please note that in China you cannot buy properties, only lease rights, all land except for farmland belongs to the government.

As these individuals leased out the properties to artists and designers who saw value in them, the first lot of refurbishments happened. However, as government bodies saw the potential in these districts, they started to slowly take back lease rights of the properties, and government departments which used to operate these properties, such as the city electricity grid, started to reform themselves to become the developer/building management organizations of these properties. Some government organizations even hired famous architects such as Sasaki for 798 District to design masterplans.

The second tide of refurbishments we see today is largely driven by developers. As newly released land dries up in major cities, the government and developers have the same vested interest to develop the leftover spaces. Most of these are done in collaboration between developers and government today. At the same time, there are a few prominent architects who have been pushing the refurbishment of large industrial sites for public use such as Atelier Deshaus, and Liu Yuyang in Shanghai. They have been instrumental in guiding the government and developers towards more inclusive design in refurbishments.

Milly Mo: I think, as the refurbishment has started earlier in the north, the projects in the southern cities such as Shenzhen are more commercialized because architects/developers already know their expectations when they do the renovations, their buildings have a very clear function and target to achieve. Whereas architects in the north were not sure about how it would turn out when they first started doing renovations.

Nicolas Valencia: So, it seems more intuitive in the north, while more structured in the south as the know-how is already systematized, doesn't it?

Han Zhang: Definitely. And the north is more political, while the south is a commercially driven region. This has always been true throughout history.

Nicolas Valencia: Good to know as the world isn't aware of how big this country is...

Nicolas Valencia: Do you identify any trend among non-designers who develop their own refurbishments? Like a DIY refurbishment movement out of academic, media scope.

Han Zhang: 80% of people do it by taking pictures from social media while pointing and guiding contractors themselves. It often leads to Instagram renovations, they look good at photos but are absolute disasters in real life.

Nicolas Valencia: Looks like we have a lot of food for thought!

Han Zhang: I really hope people can understand China better through our Editor's Talks. As you mentioned before, people have no idea of the social context of architecture in China. It shouldn't be evaluated the same way as other projects like a pinboard on Pinterest.

Nicolas Valencia: Before ending this conversation, any architects in this area you recommend to follow up?

Han Zhang: Liu Jiakun, but the best one is Atelier Deshaus.

Get to know a selection of refurbishment projects in China in this MyArchDaily folder. 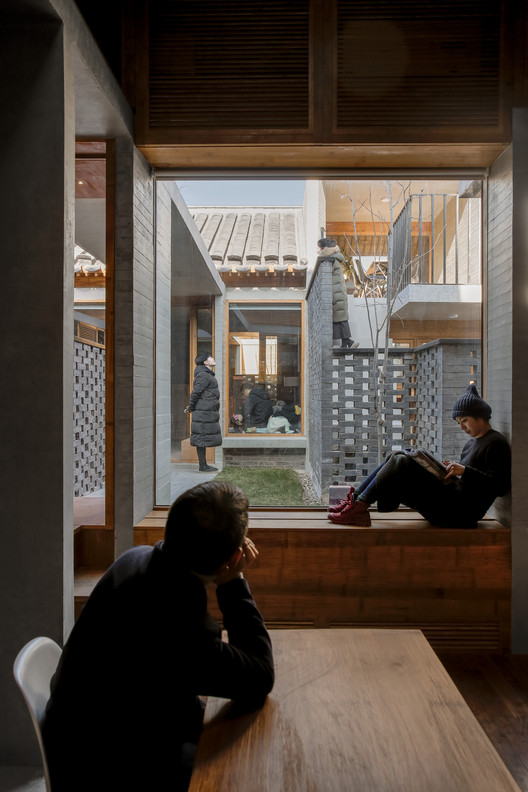