Now is your chance to build a house of cards from cards of houses with the Kickstarter campaign for the updated second edition of SCALA Architecture Playing Cards. "Arquitectura a Contrapelo", an architecture and design team based in Seville, Spain, are hoping to release a sequel to their previous successful deck of architecture-themed cards. The new edition keeps the collection current with additions of the most relevant contemporary architecture, as well as providing some upgrades and improvements from the previous deck.

Each card features artwork of a contemporary building to form a standard deck of playing cards at regulation poker size. Along with most of the examples from the previous edition, the Second Edition adds 13 new buildings from within the last 5 years, including the architecture of BIG, Amanda Levete, Johnston Marklee and O'Donnell + Tuomey. The full deck includes 52 of the most relevant and influential buildings from the last 25 years with more than 20 countries represented.

The card suits in the SCALA deck are organized to correspond to buildings of different scales. For example, the black spades represent small scale projects and feature houses and pavilions, while the white diamond cards highlight extra large urban landmarks and infrastructure projects. The cards in each suit also have a corresponding color of artwork, creating a cohesive set at every scale.

On an even more detailed level, the type of architectural representation shown on each card relates to the card number. Aces display floor plans, cards 2-7 show elevations increasing in detail as the number rises, artwork of interior perspectives can be found on cards 8-10, and finally the face cards feature facade details in growing abstraction from Jack to King.

Following feedback from players of the first SCALA edition, both the front and back artwork of the cards has been updated. The architectural drawings were given a facelift in contrast, brightness, and more, while the back pattern was revised to include silhouettes of some of the newer buildings included in the deck. The whole deck comes packaged in a white tuck box with black lettering, creating a neat, well-designed little gift for the architecture nerd in your life (or yourself).

You can see more details and back the project on its Kickstarter here. Rewards for supporting the project include decks of the cards themselves, collectible uncut sheets of the artwork, and larger format art posters. 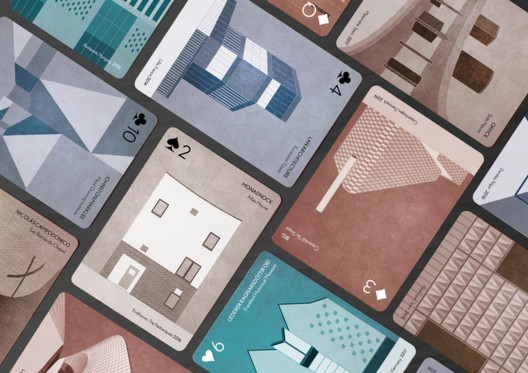