Save
How Can We Reduce Carbon Emissions in Architectural Projects?
This article is sponsored by:

Since the 1970s, humanity’s resource consumption began to exceed what the planet could renew in a year. That is, we are withdrawing and polluting nature more than it can naturally recover. According to the World Bank, if the world's population reaches even the projected number of 9.6 billion people by 2050, it will take almost three Earth planets to provide the natural resources needed to maintain humanity's current lifestyle.

Every day an enormous amount of carbon dioxide is released into the atmosphere through industry, transportation, burning fossil fuels and even respiration of plants and living things. As the consequences of climate change become clearer, both governments and private sector companies are setting targets for carbon emission reductions, since these are regarded as the main greenhouse gases, and their high concentration in the atmosphere lead to air pollution and acid rain, among other consequences.

The construction industry has a significant impact, with materials and construction products causing carbon dioxide emissions in activities such as mining, transportation, factories and combining chemical products. The concept of embodied carbon addresses the sum of the impact of all greenhouse gas emissions attributed to materials throughout their life cycle (soil extraction, manufacturing, construction, utilization/maintenance, and end-of-life/disposal). Carbon neutralization is an alternative that seeks to avoid the consequences of the imbalance of the greenhouse effect, from a calculation of carbon emission. Although the subject seems broad and almost oblivious to us, the materials you choose and the way you work with them have a footprint that you should consider.

Here are some points that should be taken into account to decrease carbon footprint in your projects:

Another iconic project is the refurbishment of Westborough Primary School, by Cottrell & Vermeulen Architecture Ltd, whose design approach was based on the idea of reducing all energy demands, using resources efficiently and using renewable energy. The architects point out that "recent studies have shown that new constructions can emit more than four times the amount of CO2 than coherent and adequate reforms. It is concluded that newly constructed buildings that meet current standards can take up to 50 years to achieve the reforms in terms of payment of their carbon debts through lower operating emissions, during which they will have to be reformed."

It is notable that the world of architecture has sought to contribute to this issue since it has taken a leading role in the process of change. New materials and solutions have been developed at a rapid pace, and there are already several good examples of building designs and even urban designs that address the concept of carbon neutrality. A statement released by the UIA said: "Urban areas account for more than 70% of global energy consumption and CO2 emissions, mainly buildings. Over the next two decades, it is projected to build and rebuild an area approximately equal to 60% of the world's total stock in urban areas around the world. This provides an unprecedented opportunity to reduce CO2 emissions from fossil fuel by adjusting the global construction sector on a path to eliminate CO2 emissions by 2050. " Foster + Partners, for example, has committed to only designing carbon-neutral buildings by 2030, being the first architectural firm to sign the Net Zero Carbon Buildings Commitment. There is no doubt that this topic is relevant and essential and will be much debated in the coming years. 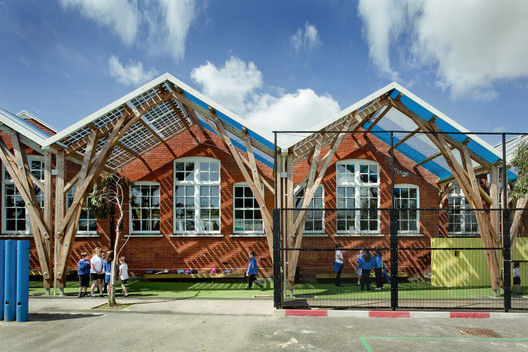