Save
Dead Fish on the Beach: the Problem with “Women in Architecture”

The overarching theme of this article speaks to the complex overlay of gender and racial issues that have made architectural practice a hegemonic space. The article takes particular concern with “Women in Architecture” as a spectacle in today’s industry; an industry that in fact has an apparent and palpable lack thereof.  In order to explain this complex issue that we suspect is ever present in other professions of the built environment, we shall describe the Architectural Place for professionals.

White men have and continue to sit on the soft sandy beach constantly breathing in the fresh air. In the architectural space, it is difficult to distinguish the hegemonic imbalances between black men and white women, because black people were (and are) generally absent from architectural historic record whilst statistics today show that men, in general, dominate the profession. The racial distribution of this group is not reported on commonly, and one can infer that the problem is not as pressing. So, in this space, and according to my reading on the matter, it seems as though black men have more privilege in the architectural space than white women do.

And so black men sit swimming in the water, which might I mention looks refreshing and okay from the white man’s perspective, but is noticeably unsettling to the black man who still has the privilege of breathing fresh air whilst his feet remain soggy.

Then we have white women, swimming in the water, tiringly so, with no break on the beach. Having to exert quite a bit of effort to reach the beach, with some reaching the shore.  Absorbing the chemicals in the not so refreshing ebb and flow of the toxic ocean that we are now aware of, they are able to observe life beneath the water by dipping under but are able to come up for a breath of fresh air.

Finally, we have black women (ah the familiar state I know so well). We drown in the depths of the ocean, looking up at the glimmers of light and constantly exerting our efforts to swim through the airless water. From the beach, this water looks like a nonchalant blue dream, but from the depths, one can see the reality of the green toxic liquid; a sight only truly visible from the perspective of the black women swimming below. Sometimes, on a rare occasion, a black woman will make it onto the beach, and when she gets there, it is shocking to everyone including her.

The problem polluting the water lies on the ocean bed, scattered across the surface of the earth: unbearably reeking, rotting, toxic dead fish.

We seldom see or know what the other conditions of the Hegemony Beach feel like. Those basking on the beach do not know what it means to drown. Those swimming are struggling, but cannot claim a similar struggle to those drowning in the depths of the green water. And those, well us, black women, in the depths, can see all the other strata with the least access to the beach. It is from here that intersectionality is most observed, be it as painful as it is.

In describing Hegemony Beach, the intention is not to find an immediate solution, because as much as the issue is pressing, convincing the other members of the space to look beyond their conditions and to help one another, requires a collaborative effort yes? And so, the intention here is to fish out the problem and place it on every plate on the shore. So that we can all experience the unbearable odor of the problem, and figure out how to rid the beach of its hegemonic problem in order for everyone to enjoy the beach.

The dead fish can be dissected into two (problems):

1.      Architecture is perceived as an ideal neutral, which it is not.

2.      “Women in Architecture” is seen as a homogenous group

1. Architecture is perceived as an ideal neutral, which it is not.

The architectural profession has extremely high gender inequality and biases. According to the South African Council for the Architectural Profession in 2015, of the 8,842 Registered Professionals (RP’s), only twenty-one percent (21%) are women. Of this group, 271 Professionals, or fifteen percent (15%) are previously disadvantaged individuals (Cullis 2015), which in South African terms means those affected by historical injustice and more explicitly, people of colour (POC). In the same year, the South African population was at 54 956 920 people. Of this group 50 422 912 were POC and only 271 were registered as POC women architectural professionals (Stats South Africa 2015). This shows the palpable racial and gender imbalance in the profession.

The numbers differ according to countries, but similar imbalances are ever-present in the US, UK and EU. Why is this so? From the readings I’ve come across, identifying the issues has been thin. However, a common thread seems to be the income gap between men and women who hold the same position. According to the 2016 Women in Architecture Survey, the gender pay gap at partner and director level differs by 55% with the gap becoming smaller lower down along the experience ladder (Mairs 2017). Again, why? The moneymaking system in the architectural profession varies according to commission and project opportunity, which is a factor to be cognizant of when reading these results. I’m not too sure what drives this trend in businesses with co-directors of different gender, but the issue persists. Institutions such as Women in Architecture South Africa have been launched to put policies in place that legally rectify these pragmatic inequalities. So we can review this in a year or two again.

Concurrently, there is the greater influential driver of this trend: the social and educational culture of Architecture. Despina Stratigakos, author of Where are all the Women Architects paints the reality of the multifaceted issue when saying, “although women represent nearly half of architecture students, women are underrepresented among faculty, especially in design branches. Course syllabuses also heavily favor men’s work and writings, leaving students with the impression that women have contributed little of value” (Stratigakos 2016).

As an architecture graduate from the University of Cape Town in South Africa in the continent of Africa, I can testify to never having come across a black woman architect in my design course outline. Aside from Zaha Hadid, but she was a “starchitect” which is an issue we’ll get onto in a bit. It was only at the advent of #RhodesMustFall and the decolonial movement where in a (yes singular) theory course in my program of the study responded to the evidently heavy Western curriculum by including and restructuring the course and its reading list. I must mention that this was initiated by the personal agency of the professor of that History and Theory of Architecture course. However, in order to truly shift the image of Architecture as a Le Corbusier cigar smoking white man sitting on his modernist chair, the African literature sitting in the dusty annex of our SA university libraries needs to be put into our reading lists. I often laugh at this particular example of micro reform because the Professor is in fact a European white man; evidence of the symbiosis of white ally-ship. I thank him for introducing me to the works of endless writers who have molded my perception of architecture greatly today. This includes architectural Professor Lesley Lokko, writer and photographer Teju Cole, artist Joy Mboya amongst a growing list of others.

2. “Women in Architecture” is NOT a homogenous group.

Historically and globally today, there is special mention of “Women Architects” amongst normal “Architects” in the industry. This fuels the idea of gender binaries, and more particularly to this article, fuels the idea that male architects are synonymous with the “ideal neutral”.Marking this year’s International Women’s Day, Dezeen’s list of 50 inspirational female architects and designers made special recognition of Danish architect Dorte Mandrup who responded by saying, “Allow me to explain; I am not a female architect. I am an architect. When we talk about gender, we tend to talk about women. Men do not really have a gender. They are just… neutral. Non-gender. That is why you do not recognize the term “male architect” Despite all of the efforts to make female architects feel special, the result is quite the opposite” (Madrup 2017).

The accolade is well received and appreciated by women in the industry. However, the recurrence of this trend coupled with the slow transforming presence of women in the industry has come to a point where architecture becomes epistemologically male. Mandrup is assertive and frank in mentioning that even though this tendency aims to perhaps include women, it does quite the opposite. It exposes a quota-like behavior that the profession conforms to and maintains the status quo of keeping women as trophies who “made it” in the architectural sphere. Look at Jane Jacobs, Lina Bo Bardi and Eve Ensler; the single few (white) women who made it onto the history shelves. Retrospectively, if the profession continues on this trend, the architectural record will remain a white male defined space.

So there you have it, the dead fish.

The head: academic curricula remain untransformed, with pinches of a personal agency from progressive educators that unfortunately does not suffice. Educators are transient in institutions, but institutions have the capacity to make fundamental long-lasting cultural changes.

The tail: An extension of the head. The culture incepted during the educational experience. It is the normalization of architecture as a male-dominated or rather defined career. Sure, we have increasing numbers, but we need to look at the multifaceted scales on the fish – equal pay, appropriate numbers and intersectional cultural inclusion that does not define power complexity and impede others from advancing in their careers.

We all have a right to breathe on our beach. 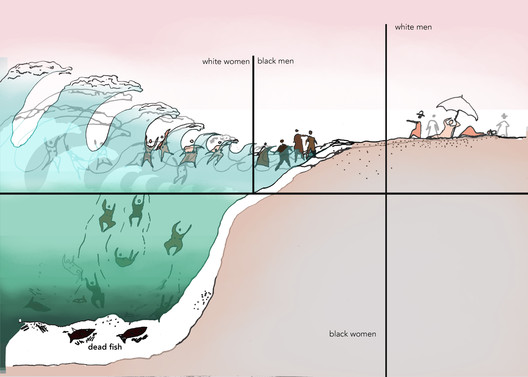