Save
Hudson Yards and Notre-Dame: A One-Two Punch of Megalomania
Share
Or
Copy

The development revolted nearly every critic. What was built was not the Rockefeller Center of the 21st century, but a herd of boxy towers, each with its own slight perversity. The sight of ungainly, uncoordinated, bloated glass stalagmites reaching up to nothing but vainglory, facing nothing but each other, felt dystopian. In The Guardian, Hamilton Nolan called it an “ultra-capitalist … billionaire’s fantasy.”

Down below, squeezed in between all this, is Heatherwick’s $200 million, 15-story folly, “The Vessel,” its meaningless stairs to nowhere sitting in sad comparison to the other movement-based architectural event nearby, the High Line. The critics were even harder on it than the numbing towers around it. The Vessel was called “a tourist trap” (the worst possible slur), “The Hive, “The Garbage Can,” “basketecture,” a poor M.C. Escher knock-off, even “The Shitgrater.” McMansion Hell creator Kate Wagner, writing in The Baffler, titled her piece “Fuck The Beehive.” But the deed was done. Bad reviews can kill a play, but these buildings and those empty stairs will last for generations.

A month later, there was a genuine tragedy: Notre-Dame burned. The live-and-in-color streaming of that horrible event suddenly flooded all of those media outlets that had just gag-reflexed to Hudson Yards. For me, the blasting flames created a kind of psychic whiplash.

The public’s response to the blaze was universal sorrow and fear. One would think that architects could sense that cultural sadness and hold their aesthetic fire until the extent of the damage to Notre-Dame was known. But some couldn’t resist their worst impulses, proffering “solutions” that did not respond to the loss of an icon, but took advantage of it—and so quickly that one wonders if there was other work to be done in these offices.

First, and most ridiculously, Sir Norman Foster offered up a viewing platform and a new spire made of crystal glass and stainless steel. Then, without solicitation, Vizum Atelier, Nicolas Abdelkader, Studio NAB, Alexandre Chassang, ABH Architectes, Alexandre Fantozzi, AJ6, Mathieu Lehanneur, Dakis Panayiotou/Kiss the Architect, and countless others jumped in—and received the full exposure that their breast-beating ego-blasts deserved: Complete scorn by all but the Architectural 1%.

Most architects I know agreed with everyone else: The instant and ghoulish response of some architects to a perceived “opportunity” in Paris was outrageously self-serving. Sadly, the public tends to hear the profession’s loudest and most outrageous voices. Architecture had its moral basis revealed, in these stilted “cool ideas,” as that of ambulance-chasing lawyers, turning others’ misfortune into personal gain.

So these two events dominated the public’s perception of “The Mother of the Arts.” Architects filled space with undifferentiated, obscene profit-mongering, in New York. Or: They danced on the smoldering carcass of damaged beauty, in Paris. Either way, those looking at the images were simply not part of the designers’ concerns. Our culture, our context, who we are—all of that appeared to matter less at Hudson Yards and Notre-Dame than what tone-deaf architects projected. A one-two punch of self-imbued elitist megalomania left all those considering what I’ve dedicated my life to as a threat to human values, history, and what many hold sacred.

The awe of Paris, as the cultural center of Western Civilization, has Notre-Dame at its heart, and that legacy can and should be restored. Instead, the Architectural 1% offered up solutions that used that provenance to create their moment. Sound-bite architecture is uniquely facilitated by the immediacy of the internet, and some architects are only too willing to indulge in its thrill.

This PR onslaught ultimately erodes the reputation of architecture to the point where there is an easy equation to make of architects to the fashion designers who traffic in shock. Architects are presented as unthinking self-promoters. In a world where the image is everything, shock equals awe as fame substitutes for care. These explosions of architectural focus revealed the worst in architecture. But instant impact with the shallowest of rationales (other than its impact) ultimately turns into boredom.

We’re products of our time. I.M. Pei took years to think through the meaning of adding to the Louvre, also a Paris icon. Some hated it, others loved it. But no one could accuse Pei of taking advantage of a supine icon to aggrandize his place in the world. Instead, he buried almost all of the square feet he was asked to add, and offered a folly of sorts as a counterpoint, rather than change the existing structure.

It is easy to bash bad images and rant about thoughtless design. But that’s not why the last couple of months have been a body blow to the value of what so many of us do every day to make the world a better place. No, Hudson Yards and the response to the fire at Notre-Dame revealed a deeply disturbing perspective. The sad and scary truth is that each, in a different way, ignores the humanity of everyone but the designers themselves. Those living in and around Hudson Yards have no voice in the development’s impersonal grandiosity. Those who deeply love Notre-Dame, its history and sacredness, are completely ignored in the designers’ visions of what should matter.

These two events conveyed crystal-clear messages from architects to the rest of the world: What you are is simply not as important as what we say you should be. 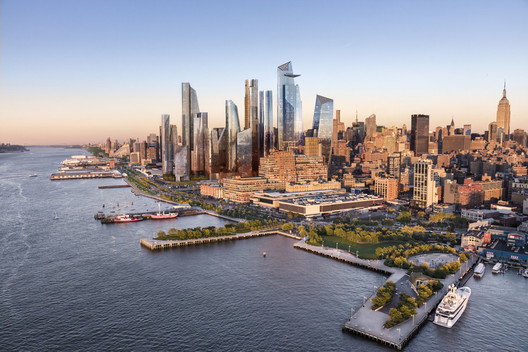