Perkins + Will have revealed a new design for the world’s tallest wooden skyscraper in Vancouver. Called Canada Earth Tower, the mass timber project is designed along the city’s Central Broadway corridor. Bruce Langereis, president of Delta Land Development, unveiled the company’s proposal to transform a 1.3-acre lot at 1745 West 8th Avenue with a project that could rise up to 40 floors. Canada Earth Tower aims to become a new precedent and benchmark for green building construction. 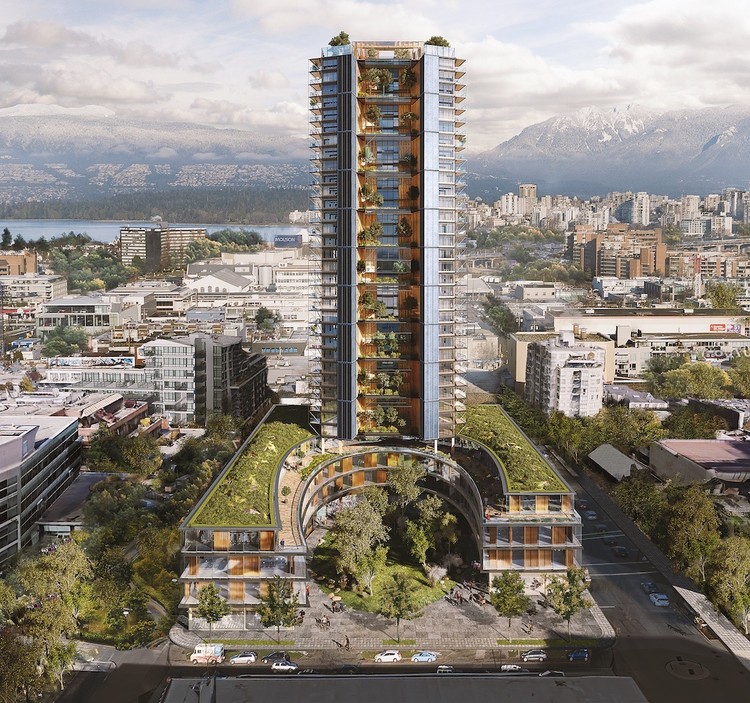 Langereis began a collaboration with Peter Busby at Perkins + Will five years ago on a design that calls for a skyscraper with around 200 homes, including market housing units plus at least 20% of the residential space set aside for non-market housing, such as rental or co-op housing. Every three-story section of the tower’s south face will contain an outdoor garden accessible to residents of the section. Down below, the podium of the complex would entail premium office space and retail, such as a grocery store. Retail and restaurants will line an expansive courtyard that opens up to West 8th Avenue.

The project would include around 339,300 sq. ft. of total floor area, giving the building a floor space ratio density of six times the size of its lot. The structure would be predominantly made out of fire-resistant wood cross-laminated timber (CLT). Floor plates, structural columns, and exteriors will use wood materials, while a concrete core containing the elevators and emergency staircase will be incorporated for seismic and fire safety.

“We’re not trying to radically change the ways building are formed, but we want to change the way they’re composed,” Langereis said. “We want to be as responsive as possible to lowering the carbon footprint, and this solution has been audited by architects, engineers, and building scientists.”

Delta Land Development has yet to submit a formal rezoning application for the proposal. 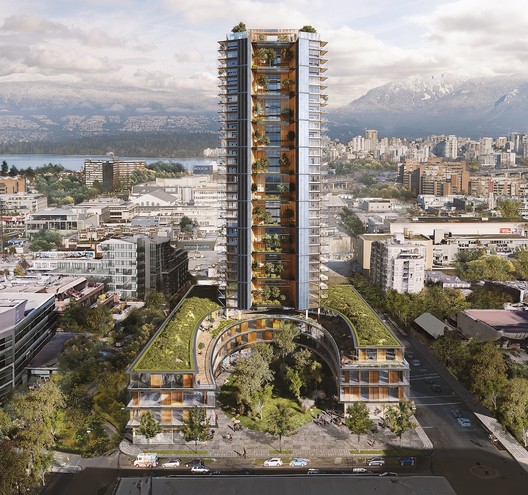