Amer Ismail, architect-turned-artist based in London, has developed a spectacular set of intricate “Globe Drawings” of cities around the world. Beginning in 2016, Ismail developed these 5-point-perspective drawings with heavy inspiration from artist Stephen Wiltshire. Having spent many years drawings architecture, including time at Foster+Partners, Ismail tasked himself with developing a series that encompassed his “interest for architecture, city planning, travel, drawings, and Star Wars.” 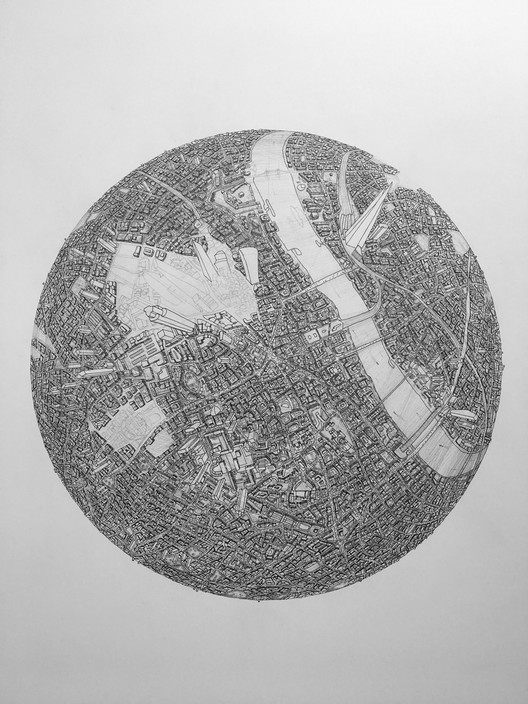 The Globe Drawings are inspired by Ismail’s travels to cities across the world, having experienced almost 50 countries to date. In the beginning, the drawings relied heavily upon images from Google Maps, and Ismail’s personal library of photographs, but as time went on, his goal moved from an accurate depiction of space to a reimagination based on his actual experience and knowledge of city planning. This paved the way for later works which are totally imagined cities that could function if built one day.

The process begins by drawing natural elements such as rivers, lakes, and mountains on paper. Ismail then zones the areas allowing him to place key roads within the globe, before then placing building and parks to connect the rest of the city. The drawings are therefore an exercise in city planning as much as they are an artistic one.

The drawings, with a diameter of 360mm playing on their 360-degree nature, are admittedly time-consuming for Ismail to create. It takes between 1 and 3 weeks to produce each piece, at a rate of 12 hours per day. However, Ismail enjoys the challenge and takes great satisfaction from watching the work continue to evolve.

I became more interested in representing it as a black dot - indicative of cities one would find in maps and atlases. The globes were rendered darker and the details less visible. This brought memories of me navigating through the pages of an Atlas given as a kid which spurred my interest in geography and cities early on – today the globe has evolved into a totally abstract work of which launched my career as an artist.
-Amer Ismail

Ismail is now preparing for his next solo show at the National Art Gallery in Kuala Lumpur, scheduled for early next year. You can stay up to date with Ismail’s work through his Instagram feed here.