Snøhetta has been commissioned for the design of the Shanghai Grand Opera House in Shanghai, China, following an international design competition. Aiming to attract a broad audience for traditional, classical, and experimental performances, Snøhetta has developed the architectural, landscape, interior, and graphic design for the sweeping complex in collaboration with Shanghai-based architects ECADI. 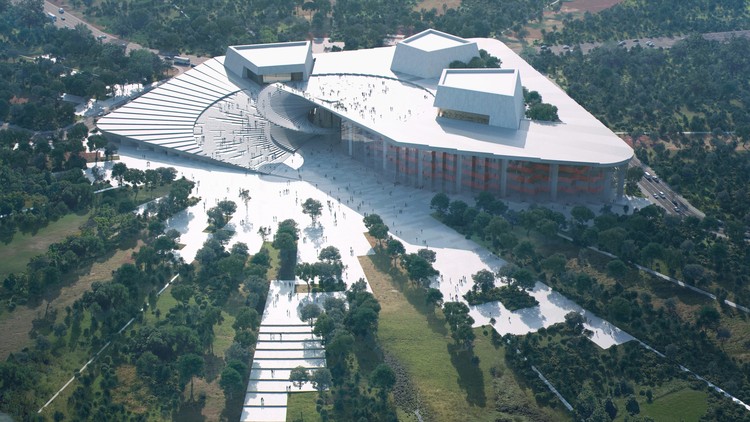 The Opera House will form part of a new urban masterplan for Shanghai, named as the most important initiative of the country’s Five-Year Plan for cultural and global influence. Situated in the Expo Houtan neighborhood, at a convex bank in the riverside, the scheme’s primary mission is to be a public, open venue that harmonizes with the radial layout of the surrounding landscape.

Designed to bring artists and the public under one roof, the sweeping form of the Opera House features a roof surface conjuring notions of an unfolding fan, “capturing the dynamism of dance and the human body.” The radial movements of the roof form a spiraling staircase that connects the ground and rooftop while offering views across the city and river bank. This spiraling motion continues throughout the project in the lobby, halls, and three auditoriums.

The roof forms an accessible stage and meeting place suitable for large-scale events and everyday visitors, bleeding into a plaza open 24 hours per day, 365 days per year. Inside, at the heart of the scheme, a 2,000-seat auditorium offers state-of-the-art technical solutions and acoustics, while a 1,200-seat second stage offers a more intimate setting. A 1,000-seat third stage offers a flexible seating arrangement for experimental performances.

The white Opera exterior stands in contrast to the soft silk used for the interior lining, complimenting oak wood floors chosen for their acoustic value. Expansive glass panes open the main hall with natural light, changing the dynamics of the hall throughout the seasons. At night, exterior lights change the appearance of the stage towers, transforming them into glowing lanterns.

The Shanghai Grand Opera House is a natural progression of our previous work with designing performing arts centers. It is a culmination of the competence and insight gained through projects such as the Norwegian National Opera and Ballet, the Busan Opera House in South Korea, the Isabel Bader Centre for the Performing Arts in Canada, and the Théâtre Nanterre-Amandiers renovation in Paris. The Shanghai Grand Opera House is a product of our contextual understanding and values, designed to promote public ownership of the building for the people of Shanghai and beyond.
- Kjetil Trædal Thorsen, Founder, Snøhetta

Snøhetta has announced the completion of Europe's first underwater restaurant. Situated in Lindesness, on the southernmost point of the Norwegian coastline, the "Under" scheme serves as both a restaurant and a research center for marine life. 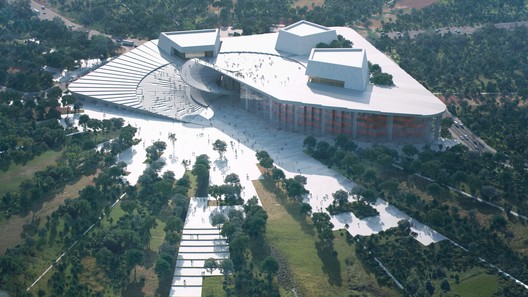