“The design we are making here is hoped to be a continuation of the natural form of the mountains, and it does not deliberately conceal the subtle changes of the new man-made objects to the place.”

Site memory
The music department complex of Zhejiang Conservatory of Music is located in the north area of ​​the campus, facing the Wangjiang Mountains in the south and the Yichuan Plain in the north. The natural environment is superior, and the mountain presents varied forms due to years of polishing. In addition, the venue has multiple identities in history, and the traces of people are particularly important here. As an examination venue for the early driving school, it has been carefully crafted here by manpower. The driving memory of a generation of Hangzhou citizens started here. As time goes by, whether it is the artificial trace or naturalness, it is slowly blended here, presenting an ingenious combination of nature and manmade.

At the beginning of the design, the multiple identity and memory of the venue became a prerequisite for design. The connotation of the building is often enriched by the uniqueness of the site and the place. In this project, the designer anchors the building to the site by means of the specific history of the site and its social factors, thus creating a phenomenological building complex. It forms a wonderful scene in which the landscape blends with human activities. Thus, space and architectural entities that can be perceived are created in an atmosphere formed by a collection of things.

Superposition of memory
Natural mountains, examination venue of driving school and music school are the memories of these different periods, and constitute the unique quality of the place itself under the influence of time. In the design, these memories have their own responses.

The original site carrying historical memory was originally a continuous mountain range, which was blocked by artificial construction and the original texture was destroyed. In this design, we repaired the missing mountains in an upward-growth situation and make it loom in them, fully restored the original geomorphological features, and completed an artificial repair of nature.

In the design of the interior space of the building, it pays tribute to the memory of the driving test of a generation of citizens. All kinds of memories of driving school such as ramps, tunnels, door openings, etc., have traces here. It is hoped that the surrounding residents can get more sense of belonging here. In addition, as a carrier of memory, space is more interesting because of these memories.

As a new generation of place memory, although the building group is entirely hidden in the mountain, it is indeed an objective existence in nature. The design creates several tunnel cracks in the mountains to provide sunlight and nature for the building, and humbly and completely expresses the presence of the building. While respecting the venue, we do not deliberately cover up the subtle changes in the birth of the new building to the place.

Construction activities in the natural environment should be a modest act with reserve and respect. The birth of the new building is a new interpretation of the original site history. We hope that it can coincide with the mountain, the driving school, the memory of the people in time and place, and become the new place memory here.

“Sound” motif
The most basic building block in the Conservatory building is the piano room. For the most frequently used space for teachers and students in this school, we define the design goal as “the best place to make sounds”. Based on this goal to study the basic shape of the room, we determined the trapezoid that is most conducive to sonic diffraction as the design motif to define the basic shape of the room based on the physical principle of sound propagation. In the architectural complex, this motif was extended and continued, and a series of trapezoidal courtyard spaces with different scales and functions were created. At the same time, with the original height difference of the site, every two units of the basic units are combined to form five compound courtyards that are trapezoidal and hidden in the mountain. The trapezoidal motif throughout the building makes the building group achieve unity and harmony at different scales.

Spatial translation of the venue
The interior of the building is rich and varied, in striking contrast to the closed exterior. The decentralized compound courtyards in the complex are connected in series by streamlined walkways. Four open spaces of different themes are inserted into the building streamlines, which can be applied to different specific teaching units. In the process, the wonderful form of roof-garden-roof is experienced responding to the changing space theme. The continuous undulating ramp and the tunnel-like door opening in the traffic space are the translation and response to the driving school space.

The main body of the building appears in a hidden state in the mountains to reduce the impact of the construction on nature. On the basis of the natural topography, a circular half-enclosed open-air viewing site is built, with the architectural form of the classical theater as the core public area of ​​the building group and the interface with the outside world. In the five moderately separated “hidden buildings” - trapezoidal courtyards - a group of small traffic bodies connecting the roof and the courtyard space is implanted, which appears prominently on the surface of the mountain, leaving the building groups hidden in the mountains but not losing the sense of presence, expressing the existence of human activities in the field with an objective attitude.

The facade of the building is like a revealed rocky interface splitting the mountain and is unique but not sudden in the natural mountain. The wall material uses layered dark stone to echo the landscape of the courtyard. The greening system connects the roof and the courtyard in tandem, blurring the boundary between the building and the environment, and creating a more direct dialogue with the mountain. Dark facade stone, carefully designed diversified paving and fully planted roofs embody another architectural environment in the natural environment. The two environments interspersed with each other and broke through the boundaries of each other, making this group of buildings more harmonious in nature.

Conclusion
The construction activity is a game of reason and art. In this project, the music department group connects history, nature and architecture with a peaceful and simple design. The buildings are humble and self-sufficient in nature, secret and not absent. The superposition of new buildings traces on the memory of the original venue will also become an indispensable memory in the history of the future. This is an exploration of the place memory through the way of memory superposition. 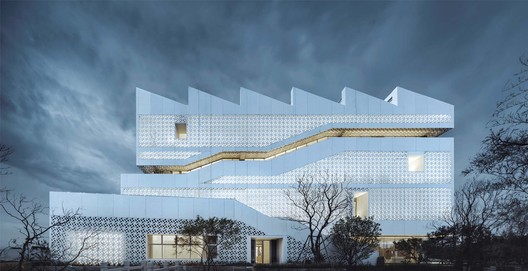