Save
Why Keep Drawing When Digital Tools Deliver Hyperrealistic Images?
Share
Or
Copy

Starting this month, ArchDaily has introduced monthly themes that we’ll explore in our stories, posts and projects. We began this month with Architectural Representation: from Archigram to Instagram; from napkins sketching to real-time-sync VR models; from academic lectures to storytellers.

It isn’t particularly novel or groundbreaking to say that the internet, social media, and design apps have challeged the relation between representation and building. A year ago we predicted that "this is just the beginning of a new stage of negotiation between the cold precision of technology and the expressive quality inherent in architecture". But, is it? Would you say digital tools are betraying creativity? This is an older dilemma than you think.

In this new edition of our Editor's Talk, four editors and curators at ArchDaily discuss drawings as pieces of art, posit why nobody cares about telephone poles on renders and explore how the building itself is becoming a type of representation. 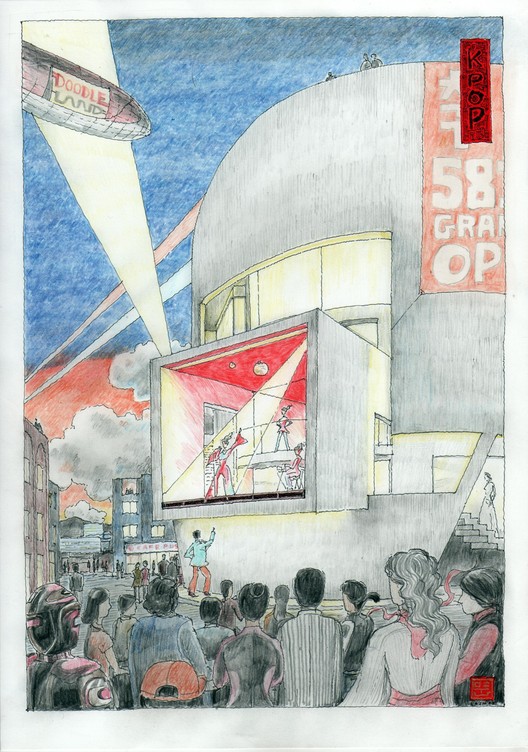 Nicolas Valencia: First of all, as editors and curators, do you see new trends in built projects in terms of representation?

Danae Santibáñez: Yes! In terms of narrative, I think we are getting past the "axonometric boom". The narrative used to be more global and less centered around details, faster to digest. Now I'm seeing much more detail-oriented drawings and very complete plans and sections. For me, it has to do with conceiving the drawing as a design in itself. As a result they’ve become more and more complex.

Katherine Allen: I do think the narrative has become a much more essential component of projects —not necessarily in terms of how they are actually designed or detailed, but certainly in how they are conceived and ultimately pitched. I do think there's a shift in attention back towards quite minute details because there's also now more reward for being able to show that attention to detail across a wide variety of platforms. Details are also a way to work out design ideas and to test tools of representation. They're exercises in broad creativity, not just in architectural representation.

Eduardo Leite Souza: I think many architects have sought to represent how the building will be contextually appropriate rather than how it will look as a mere photograph.

Clara Ott: I think architectural representations are gaining power in terms of the information they deliver.

Nicolas: VR/AR pushes a certain idea of “objective” representation, as they are technologies able to recreate spaces as “they are/would be.” In that scenario, other representation tools could lose its value as they become obsolete to explain a project. Do you think representation could become art or "exercises in broad creativity", as Katherine said?

Katherine: I actually wonder about VR/AR and its role in representation. In general, I've found that the way these tools are presented is as just that—tools. They're more aimed at the client as a kind of assurance of product. They offer a profoundly realistic vision of design that is very easy to understand by non-designers. That's how you get them to put down that massive capital investment necessary to make a big project happen. In terms of creativity, I personally haven't seen so much that feels like it's tackling representation in a particularly generative way.

Clara: After decades of trends in realistic representations, I think digital rendering and architectural representation, in general, are now evolving with a more careful approach to the ability to recreate spaces "as they would be". So now it is more about transmitting what architecture is capable of doing instead of what it can look like. And, anyways, I wouldn't consider "art" itself.

Eduardo: I think the chronology of the representation of architecture closely resembles the history of art —for instance, the revolution from painting to photography; or the painting movements that didn't seek a perfect representation, but wanted to highlight other aspects of the narrative.

Danae: For me, art has to have a statement, it can use any media, but has to have a statement. You can take any Soto de Moura project and consult its drawings. You can actually see the design process. Those drawings are a statement, but they are also "fashionable drawings". For instance, I really love collage, but they became so broad and used, that a lot of them lack coherence. Like collages in very dry areas that are illustrated using Caribbean vegetation. It makes no sense.

Eduardo: I think representation is always abstraction as well because we only represent what we want to makes sense, even a floorplan is an abstraction of reality.

Katherine: Yes, Eduardo! You'll leave out the telephone poles that you know will be there because they're not necessary to the presentation of the idea.

Nicolas: It's pretty common to think of architecture as an art, but it's also an industry as any other. Most of all new tools are actually "aimed at the client as a kind of assurance of product", as Katherine said. Can architecture transform those tools to exercise creativity or having a statement instead?

Katherine: Yes, of course! Art is also highly commercial, and any movement that is successful enough to be widely known is so because it was also commercially successful. But I think it's a process. As far as architectural representation goes - rarely is an architectural drawing the end in itself. It's usually a part of a set of works that are meant to articulate what a project might be or how it might feel. But you do also get people like Lebbeus Woods or Moon Hoon who are known more perhaps for their drawings than for their built works

Danae: Can a Lina Bo Bardi drawing be art? I think yes, because art has a profit or market value, besides the statement.

Nicolas: Could ‘written architecture’ become —or consolidate— as a new kind of representation as we might feel overwhelmed of images?

Katherine: I'm so curious about that question. It's incredible to me how many written descriptions of architecture wind up sounding exactly the same, even for wildly different projects. But I do think some practices do it in interesting ways! de vylder vinck taillieu for example - I have never read project texts quite like theirs. Their drawings are also quite specific. They aren't just 'deliverables' but representations of their own interests as designers.

Eduardo: It's an interesting and difficult exercise to describe a building with words only so that someone can represent it in the mind, but I'm not sure if written architecture would count as representation.

Danae: Architects have so many problems putting their ideas into writing. I did a very "funny" exercise with my students: I read a project description from ArchDaily out loud and then had them draw what they heard. The results were amazing.

Nicolas: If you have drawings, illustrations, plans, and digital tools to illustrate a building, why would you duplicate that info when writing about it?

Clara: Just as you are duplicating it when you present a plan, a section, an axonometric, a sketch, and a rendering. They all contribute to conveying a different part of the message. Of course, some aspects will be repeated, but I think every form of representation tackles a different point, or is aimed at a different public or contributes to a part of understanding.

Katherine: I completely agree, Clara! That's kind of what makes it interesting, too. There's a lot of reading between the lines.

Danae: I disagree. The different types of representation are different tools, like the oil painting, sculpting, but the message can be the same, they don't necessarily tackle different points of view or even public. We have to separate the tool from the message.

Katherine: I see what you're saying, Danae - the message can be the same. But I think what you get out of different mediums can be different. That's why there's value in different approaches. Putting that 'Caribbean plant' in the desert can instantly tell you something about the intended lifestyle, or who the project is built for. But you could run in circles trying to find a succinct and meaningful way to write that.

Nicolas: Katherine, you wrote an article that used the expression “architecture’s remote experience” in reference to “when structures become a commodity for remote viewers rather than an engaged participant in the urban fabric". What’s the role of representation in those cases?

Katherine: What I was arguing there is that certain types of architecture have become an extension of corporate branding. Tech companies in particular are doing this —physical places like Apple aren't sellable items to the public, but they reinforce the image of who you think they are. The building itself becomes a type of representation. What it's like to actually be in those places doesn't matter so much, because the vast majority of us will never know.

Katherine: I'm not sure it extends all that much beyond a very cloistered set of projects —tech campuses, for example. Most places don't have the money to simply treat architecture like a branding exercise, but for the ones that do, I'm really curious to see how they choose to represent themselves through architecture. What would the Netflix building look like, for example?

Nicolas: We assume Netflix would treat their built spaces as their website —architecture as UX design.