A New Book Chronicles the Turbulent History of Architectural Complexity

The marquee-busting title says it all: Joseph Giovannini’s Architecture Unbound is an ambitious attempt to explore the wilder shores of design and explain how and why maverick architects have dared greatly. It’s also a wide-ranging introduction to artists who laid the groundwork for architectural innovation a century ago; to the philosophers and theorists who mapped new ways of thinking, and to the complexities of chaos theory, parametric and software programs that have shaped exceptional buildings over the past few decades.

Superstudio- and Lebbeus Woods-Inspired Projections Light Up the Karlsruhe Palace

As part of the ongoing festivities celebrating Karlsruhe's 300th anniversary (KA300), the German city's central palace is being illuminated nightly with projections inspired by Italian 70s architecture group Superstudio and Lebbeus Woods. The elaborate installation, the Schlosslichtspiele is showcasing the work of nine prominent artists and artist groups - all of whom uniquely explore the "depths and shallows" of the Karlsruhe Palace with their visual art.

Read on to watch a video of the projections.

American Perspectives: From Classic to Contemporary

The opening of the exhibition American Perspectives: From Classic to Contemporary presents the hand-drawn worlds of prominent American architects and architectural draftsmen. The art of architectural representation in the USA, particularly at the beginning of the 20th century, reached heights of originality and perfection, which still stands out today. On show will be works by Frank Lloyed Wright, Richard Neutra, Lebbeus Woods and Achilles Rizzoli.

Experimental architect and psychologist Margot Krasojevic has been designing literally in-credible structures for her entire career. Starting with more conceptual designs, her parametric and outlandish forms are becoming increasingly buildable, and several, including her Jetway Hotel, are under construction. Following on from her latest project, an artificial snow cave which functions as an emergency shelter, ArchDaily was able to talk to Krasojevic about what goes into her work, how she designs and how she feels about the current architectural media - us included.

The Museum for Architectural Drawing presents Lebbeus Woods, ON-line, an exhibition of the finest works of architectural theorist, draftsman, educator and architect, Lebbeus Woods (1940–2012). Curated by his longtime friend and partner Christoph a. Kumpusch, the exhibition brings together a collection of Woods’ visionary works that have never been exhibited before. The intensely rendered architectural and urban environments produced early on in Woods’ career are exhibited together for the first time. These ink and pencil drawings cover a wide range of Woods’ research and re-imagination of cities both real and fictive and support Woods’ longstanding desire to show the capacity of architecture as a transformative and eloquent force.

This summer, the drawings, theories and works of architect Lebbeus Woods are headed to the city that Lebbeus considered home. After a five-month stay at SFMOMA, the exhibit "Lebbeus Woods - Architect" will be at the Drawing Center in SoHo, Manhattan until mid-June. The following story and overview of the exhibition, by Samuel Medina, originally appeared at Metropolis Magazine as “Coming Home".

It’s all too biblical an irony that Lebbeus Woods—architect of war, catastrophe, and apocalyptic doom—died as strong winds, rain, and waves barreled down on Manhattan, his home for some 40-odd years. Woods passed the morning after Hurricane Sandy flooded Lower Manhattan, almost as if the prophet had succumbed to one of his turbulent visions. But this apocryphal reading is just one way to view Woods’s work, which, as often as it was concerned with annihilation, always dared to build in the bleakest of circumstances.

This Article by Avinash Rajagopal originally appeared in Metropolis Magazine as "Five Compelling Works of Architecture Fiction". Rajagopal argues in favor of the often dismissed genre of 'architecture fiction', giving five recent examples of the best the field has to offer.

As far as we know, the writer Bruce Sterling coined the term “architecture fiction,” in 2006. He was referring, of course, to speculative projects in which architects use ideas for the built environment to express themselves in a way that’s analogous to how storytellers use words. It’s a longstanding architectural tradition. Sterling cites the polemic work of the 1960s British group Archigram; the canon includes Lebbeus Woods’s drawings from the two decades that followed and Greg Lynn’s digital imaginings (one of which accompanied a short story by Sterling, in Metropolis’s 2003 Fiction Issue).

In the last few years, we have seen a groundswell in the genre. The usual reason given to explain the profusion of these fictitious works is that the recession made it hard for young architects to find “real” work, but there are probably other factors at play. Ethical concerns are back in the zeitgeist for a contradictory generation that’s equally into Occupy Wall Street, iPhones, and hipster shops selling single-source coffee. Their utopias and dystopias are more easily imagined with 3DS Max and Photoshop, and far more quickly disseminated online. All of this has made for some pretty rich storytelling.

Commenters on blogs still rail about the “uselessness” of architecture fiction. To answer them would be akin to mounting a defense of the short story—one surely could, but it would be a self-defeating exercise. The very nature of fiction is to be less bothered with usefulness than with possibility. In that spirit, here are five recent projects that I found compelling, in both imagery and the stories they attempt to tell.

From November 22 through March 2, 2014, the Eli and Edythe Broad Art Museum at Michigan State University presents Lebbeus Woods, Architect, bringing together over 100 works from the past 35 years by one of the most influential architects working in the field. Recognized beyond architecture, Lebbeus Woods (1940–2012), who was born in Lansing, Michigan, has been hailed by leading designers, filmmakers, writers, and artists alike as a significant voice in recent decades. Notably, Zaha Hadid, architect of the Broad’s newly inaugurated building, cities Woods as a key influence.

Lebbeus Woods envisaged a world at war. The visionary architect, artist, and educator - who would have turned 73 today - drew cities under duress, buildings in the face of destruction, and landscapes confronting catastrophe. He imagined an underground city connecting divided Berlin, buildings designed for seismic hot zones that could move during earthquakes, and a utopian city that looked like an insect. He didn’t depict the world as it was, he depicted what it might be. 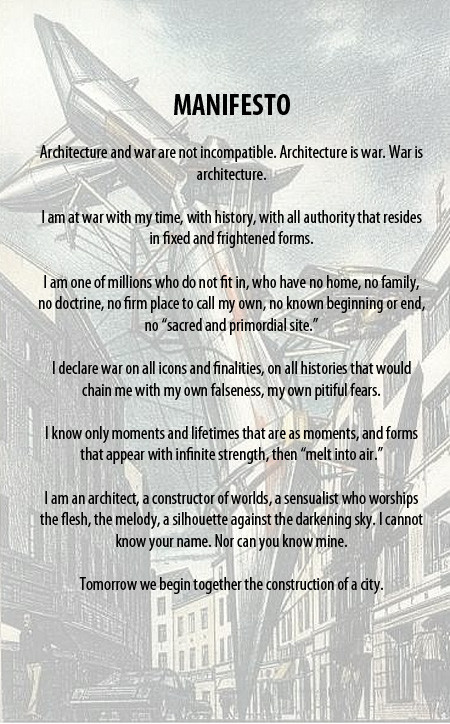 32BNY is collaborating with Spirit of Space is relaunching a website in a corner of the internet structured as a videopolemic to explore architectural discourse in a revolutionary way. The first video in the series is a tribute to Lebbeus Woods who passed away late last year. Woods was an aggressive philosophical thinker of architecture and space. He launched worldy ideas into his architecture through imaginative leaps - exploring politics, society, ethics and the human condition as it pertained to architectural space in the form of vivid and dynamic drawings. His work has inspired his contemporaries to think outside of the physical space of architecture. Steven Holl and Sanford Kwinter discuss some of his ideas and philosophies through his quotes and inspirations. The video serves as a reminder, and to some a guide, as to how to build upon the philosophy of architecture beyond the physical.

More on the video after the break.

SFMoMA will highlight the legacy of Lebbeus Woods in an exhibition that will run from February 16 through June 2, 2013. It will include 75 works from the past 35 years of his career. Lebbeus Woods is often categorized as an architect, but always as an artist and visionary. His career has been filled with imaginative leaps through the concepts of space and form, exploring politics, society, ethics and the human condition. He was a great influence on architects, designers, filmmakers, writers and artists. The exhibition will celebrate his untimely death late last year and the breadth of influence that his work had on the art and design community.

One October morning in 2003, Lebbeus Woods shattered the sleepy air in Los Angeles with a swift and decisive re-deployment of his famed Foundation Cartier installation, The Fall. 1,400 steel rods were drilled into the polished concrete floors running SCI-Arc’s quarter mile. In a single night of cloaked activity, Woods and a gang of student volunteers made Maya, Rhino and all computer pyrotechnics, then all the rage, seem irrelevant with a forest of bent steel rods that seemed to react to the forces of the building…and seemingly appeared out of nowhere.

Lebbeus Woods, the American architect, artist, and theorist, has died today at the age of 72.

Woods may be best known for his radical re-imaginings and re-constructions of cities in crisis. While most of Woods' politically-charged, fantastical sketches were too fantastical to be built, many have been displayed in Art Museums across the globe; the last exhibit occurred just this March at the Friedman Benda Gallery in New York City. His only built project, the Light Pavilion of the "Sliced Porosity Block," commissioned by his longtime friend Steven Holl, was completed and opened this year.

In his blog, Woods described the Pavilion as a space "designed to expand the scope and depth of our experiences. That is its sole purpose, its only function. If one needed to give a reason to skeptics for creating such experimental spaces in the context of this large urban development project, it would be this: our rapidly changing world constantly confronts us with new challenges to our abilities to understand and to act, encouraging us to encounter new dimensions of experience."

Indeed, it is this quality that characterizes all of Woods' works. As Geoff Manaugh, the author behind BLDGBLOG , puts it: "Woods's work is the exclamation point at the end of a sentence proclaiming that the architectural imagination, freed from constraints of finance and buildability, should be uncompromising, always. One should imagine entirely new structures, spaces without walls, radically reconstructing the outermost possibilities of the built environment. If need be, we should re-think the very planet we stand on."

More on Woods' life and career, after the break...

Ai Weiwei was arrested today on unspecified charges by Chinese security police while he and his family were about to board a plane to Hong Kong, as reported by the NY Times.