MVRDV has won a competition to renovate and extend the Palais du Commerce in Rennes, France. Developed in collaboration with co-architects Bernard Desmoulin and developers Frey and Engie Avenue, the transformation of the historic landmark will “signify a renaissance for both the building and its surroundings.”

The MVRDV scheme will reactivate both the Place de la Republique and the Palais, turning a former public building into a centerpiece of the city’s main commercial street as was originally intended. While being respectful to the existing building, the MVRDV proposal adopts a critical approach to its drawbacks, such as transparency and accessibility. 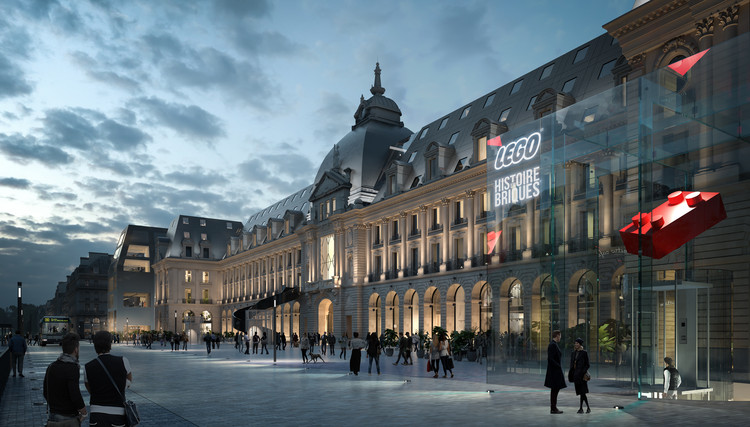 Situated in the southern part of Rennes’ city center, the Palais du Commerce was born from two construction phases in 1885 and 1929, serving as a post office, library, and arts school. With poor integration between the building and its surroundings, most residents are unaware of most of the activities inside: a disconnect that MVRDV seeks to rectify.

The MVRDV scheme will transform the Place de la Republique into an inviting public space, with a reorganization of the bus network, landscaped pedestrian areas, and the partial re-opening of the cover of the river Vilaine.

Work to the Palais will include increasing transparency through the replacement of windows with larger panes, while glass storefronts on the ground level will be added to the arcade arches to increase commercial space without detracting from the drama of the original feature.

Most strikingly, a grand, winding staircase will be added to the center of the exterior façade, offering a tongue-in-cheek reference to the fact that the original building did not contain an elegant foyer centerpiece. The staircase will allow access to a second-floor reception area, setting up a path through the building’s upper levels.

At the eastern end of the building, a timber-constructed extension will imitate the form of the original building while adopting a modern architectural expression. A façade of black textured ceramics and opaque glass references the black slate roof of the Palais, connected to the existing building by a glass gallery that offers permeability at street level.

Not only is Palais du Commerce a local landmark, but its transformation will turn the Place de la République into a popular destination and act as a vital catalyst for its surroundings. Our design approaches this task with an appreciation of the building’s history, but also with an eye towards the future, helping Rennes to achieve its urban vision. The additions that we will make are clearly modern in character, clearly showcasing this design as the latest chapter in the building’s storied history.
- Nathalie de Vries, founding partner of MVRDV

Through largely “invisible methods” the proposal integrates an extensive program, with basements extended underneath the Place de la Republique, and a bistro contained in the scheme’s central dome. The spaces between different roofs are opened up to create a continuous passage from one end to the other, with gaps covered in glass to maintain the original skyline. In total, the 18,000 square meter scheme will contain new shops, a hotel, coworking space, offices, a LEGO museum, and a school for the kitchen and hotel industry.

Construction will begin in 2022, with completion expected for 2025.

Last month, the Rotterdam-based firm released images of their dual towers in Taipei, adorned with interactive media facades, along with details of their proposed mixed-use KoolKiel complex, designed to redevelop a post-industrial site in Kiel, Germany. 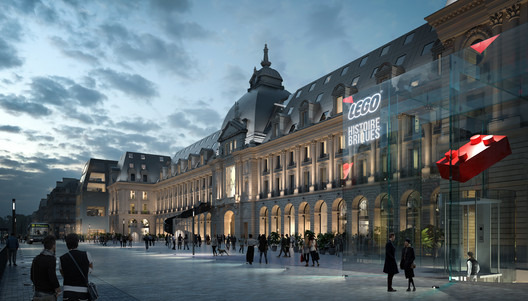