Plans for the project are being led by Anthony Wilkinson, founder and director of the Wimbledon International Music Festival, an event comprising 200 concerts in various local churches. Wilkinson's struggles to find satisfactory local venues - not to mention London's notorious lack of acoustically-suitable spaces - encouraged him to pursue his own project.

“To have a Frank Gehry designed concert hall in Wimbledon would be a total transformation of London concert life," explains Esa-Pekka Salonen, director of Philharmonia and patron of the project, in a statement on the Wimbledon Concert Hall website. "It would have a global effect. With these buildings, the influence goes way beyond the art form.” Gehry is widely credited with kicking off the 21st-century icon movement after his Guggenheim Bilbao captured (and sustained) global interest. He also has experience with music venues: the Walt Disney Concert Hall in Los Angeles, Millenium Park Bandshell in Chicago, and recently the Pierre Boulez Saal, a small and understated venue built within an existing Berlin building.

Though the proximity of the two major concert hall projects would seem to render one redundant, Wilkinson and Gehry are both quick to emphasize that the two would, in fact, complement each other. "One doesn't have to negate the other," said Gehry to the Observer. The London Centre for Music is expected to have nearly double the seating capacity of the Wimbledon venue, and as such will be able to host the big-ticket items that Wimbledon can neither host nor afford. Wimbledon, by contrast, will be "small enough that it could attract creative stuff to happen that probably couldn't be afforded at the Barbican."

Indeed, it's this opportunity for creative flair that's attracted both Wilkinson and Gehry to the project. Wilkinson, a former filmmaker who lived for years in Los Angeles, recalls Frank Gehry's architecture with the same energy with which he speaks of his music festival. “...His architecture has a sense of humor and a soul to it,” said Wilkinson to The Guardian. Gehry, for his part, seemed equally piqued. “I’ve always wanted to do a concert hall in London,” Wilkinson recalled Gehry saying in an early planning phone call. "Let’s talk about it.”

The project is, for all the fame and fortune behind it, still very much just a hope. A note on the project's website states: "There is still a lot of hard work to do. While we are drawing up detailed proposals for the Council we also need to demonstrate support from the community and community music groups in the area." Locals interested in the project are welcome to submit their signature and a comment stating their support for the project. 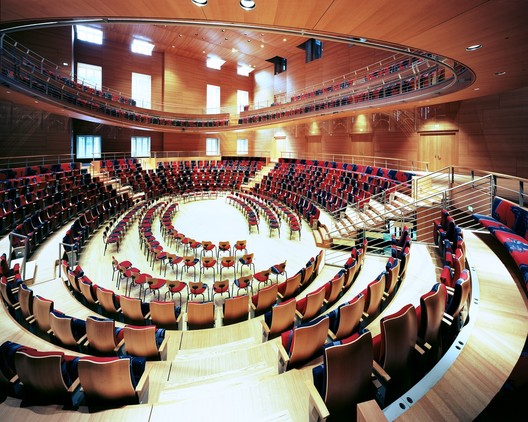