Built on a site that was once the largest wholesale meat market and slaughterhouse in northeast Paris, Parc de la Villette was a new typology for landscape design in that it did not preface nature or architecture, but instead generated hybrid forms that integrate the man-made with the vegetal. Unlike parks of the past that sought out beauty and specificity of function, Tschumi's landscape is a flexible space which acknowledges that the public realm is transient.

Made possible by the dramatic enhancements to computer-aided design, Yokohama Terminal was one of the first projects to utilize digital design technologies. The infrastructural project championed landscape urbanist principals in a facility that creates circulation through shaped surfaces that serve and accentuate the site's functions.

Built on what was once parking lots, bus lanes, and a train yard, Millennium Park is cheekily called "the world's largest roof garden" by masterplan designers SOM. The site completed Daniel Burnham's 100-year vision for the Chicago lakefront in a settings that is both classical and contemporary, with grand promenades, a Frank Gehry-designed bandshell, and beloved public sculptures, above two-levels of parking, bus lanes, and a renovated and expanded train station.

The sculpture park is built atop a former brownfield site in a zig-zag form that crisscrosses over a major arterial road and train route. In a gradual descent – 40 feet from the city to ground level – the pedestrian path reestablishes a connection to the adjacent waterfront on the last open parcel of land.

As one of the largest airport terminals in the world, Beijing Capital exemplifies what Charles Waldheim describes as "sites whose scale, infrastructural connectivity, and environmental impacts outstrip a strictly architectonic model of city making."

Perhaps the most well-known project on this list, the High Line is a park built on top of a defunct elevated railway on the West Side of Manhattan. After decades in disuse, the tracks had become a self-seeded park that the design by Field Operations, DS+R and Piet Oudolf sought to honor in spirit, but also augment with amenities like paved paths, benches, lawn spaces, and gardens.

Built as a vegetal cap to the Woodall Rodgers Freeway, Klyde Warren Park seeks to correct some of the shortsightedness that allowed highway systems to bisect neighborhoods and blight so many American downtowns in the twentieth century rush to develop car infrastructure. The 5.2 acre park bridges Downtown to the adjacent Arts District with amenities that include a performance stage, restaurant, dog park, playground, great lawn, and a garden of native plants.

Hypothetical, Ongoing, and Under Construction Projects

In the wake of Hurricane Sandy, New York's Rebuild by Design initiative was meant to generate solutions for regional vulnerabilities that would prepare the metropolitan region for future storms. In need of a wall that isn't a wall, in the words of Bjarke Ingels, "[BIG U is] a string of pearls of social and environmental amenities tailored to their specific neighborhoods, that also happens to shield their various communities from flooding." In other words, BIG U is a series of landscaped interventions that create spaces for everyday recreation, but could endure the brunt of a major storm if the need were to arise.

Repurposing an aging highway bridge over the Anacostia River, OMA and OLIN's proposal would use the viaduct as a community building park space for populations on both sides of the river. The program calls for rain gardens, an amphitheater, hammock grove, cafe, plaza, lawn space, and plots for urban agriculture.

The second-largest falls in the United States, the Riverwalk design by Mayer/Reed, Snøhetta, and DIALOG seeks to reintroduce the public to a site that was overwhelmed by industrialization during the late-nineteenth and twentieth century. The plans call for the preservation of existing industrial structures with new interventions that will weave the public through adjacent structures built around the geological formation.

A facility that unifies the growing, selling and distribution of food into a mixed-use plan of previously separate entities, Food Port repurposes a former tobacco plant into “[an] active economic and community hub” meant to unravel the commercialization of food production in the United States.

A 2,200 acre park masterplan being built on top of what once was the largest landfill in the world. The Field Operations design, won by competition in 2001 and begun in 2006, will continue to transform the park over the next two decades. Completion is expected in 2035. 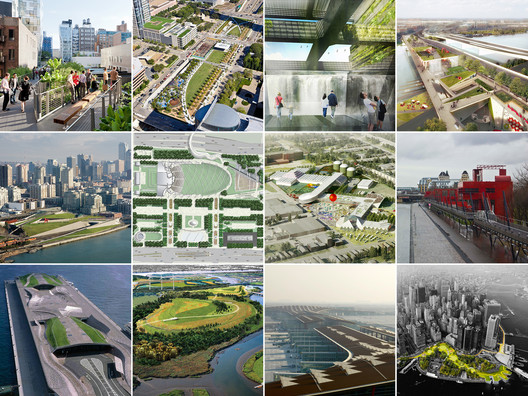