Save
As London's Housing Crisis Deepens, a Provocative Proposal Suggests the Solution Rests with the Queen
Share
Or
Copy

"The rooms are awash with sparkling candelabra, sumptuous carpets, marble columns, sculptures, and expensive artworks,” says Benedikt Hartl, co-founder of Opposite Office of Buckingham Palace. The 775-room, 79-bathroom, 828,821 square foot residence has been home to Britain’s royalty since the 1830s. And, if Opposite Office’s recent Affordable Palace proposal were to go through, could also be home to you.

Affordable Palace lays out a proposal for a multi-level co-living community atop Buckingham Palace, adding space for more than 50,000 Londoners to live in the center of the city. The proposal mentions the added benefits of avoiding steep land costs that commonly drive the high price of construction as well as being a good PR move for the Palace, all while bringing attention to the housing crisis and need for affordable dwellings. 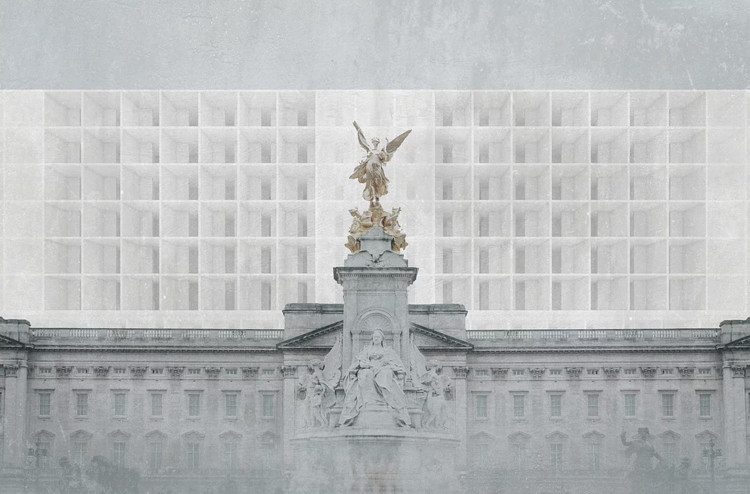 Affordable Palace is deliberately provocative - a proposal made for the headlines - but the design is hardly the point. When Hartl urges Her Majesty to “use your royal power and money” to place affordable social housing on top of Buckingham Palace, it is a misdirect. The real issue is that a large part of London’s population is locked out of the housing market by prohibitive prices - prices rising disproportionate to wages and further deepening the already-wide affordability gap.

This is hardly limited to London, though it is one of the more extreme examples. Opinions differ sharply on who’s to blame for the problem, and how we should go about solving it. The trouble with housing in London has two facets: housing supply and housing affordability.

The population of London was estimated at 8.8 million people as of 2017 and has been growing by around 1.1% annually since 2012. That growth means approximately 96,000 new residents per year, while average yearly housing construction has been closer to 20,000. Homelessness in London increased by 7% and the number of families in need of temporary housing increased by 6% between 2015 and 2016. London mayor Sadiq Khan has declared that 66,000 new homes need to be constructed annually to catch up with the backlog as well as meet the current increasing demand.

Opinions are not unanimous, however, that increasing the housing supply alone will solve the problem. Some blame speculation and foreign investors, while others (such as Patrik Schumacher) insist those are exactly the things London needs. The fact remains that supply is not the only problem with London’s housing market.

A large portion of the population cannot afford to break into the real estate market and even renters face affordability concerns, with London ranking as the most expensive city in Europe for rental housing. The average cost of renting an unfurnished, three-bedroom apartment in central London is more than three times the average for the UK as a whole. While property values have soared in recent years (nearly 8% annually in the past decade) and wages have been entirely unable to keep up (only 1.1% between 2011-2017).

While structural, economic problems like these could take decades to address, many architects, planners, and designers have proposed their own ideas to alleviate some of the housing market stresses as much as they, shapers of the built environment, can.

Architect Peter Barber is one such advocate, committed to housing, urban life, and making them work together. One of his developments in East London, McGrath Road, reimagines back-to-back housing, a traditional typology where units share back party walls. The downfall of this housing format in the past had been its lack of outdoor space, but Barber’s design arranges the homes in a square with a shared central courtyard and creates deeply recessed private porches for the street-facing units. The project’s high density and community were some of Barber’s stated benefits to the 26-unit development.

Barber’s practice is integral in Mayor Kahn’s house-building initiative and has already created multiple affordable housing developments in London, notably Ordnance Road and Worland Gardens. The developments make use of local building materials and reinterpret traditional building styles for modern tastes and construction methods. The designs promote a community atmosphere, allowing residents to share in appropriately-scaled community spaces. And they are (compared to the estates of yesteryear), relatively small.

Barber’s interest in the issue extends beyond physical solution, however. His project, 100 Mile City, explores a vision for a linear city connected by monorail wraps around London’s green belt to create high-density outskirts and relieve the pressure within the city. There’s more than a whiff of Ebenezer Howards’ Garden City about the project - and comes at an equally crucial moment for urbanism.

Another issue related to the housing crisis is a need for emergency temporary housing, a need which one Councillor in the London borough of Ealing states is ever-increasing in a part of the city where “not even doctors can afford to live.” A shipping container project in Ealing by QED Sustainable Urban Developments aims to create durable, adaptable temporary housing using a “kit of parts” approach. Shipping containers are ideally suited for modular designs and their structural integrity is beneficial for the transitory nature of this type of project. Utilizing brownfield sites and also taking advantage of other sites that are spoken-for but available for a short period of time, the idea is that the homes can be stacked, unstacked, relocated and reused as needed. Separating the value of the home from the value of the land in a mobile project has the benefit of decreasing costs as well as utilizing underused space that’s already available in the area.

The London housing crisis can only be solved with time, collaboration, and innovation. Political divides may impede progress, but these challenges seem only to spur on designers. Whether this means living with royalty, or simply finding ways to live a bit more like royalty, collaborations with local communities and governments have the potential to lead to a breakthrough. It can’t come soon enough. 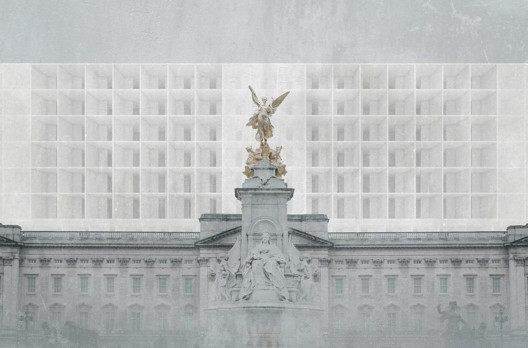