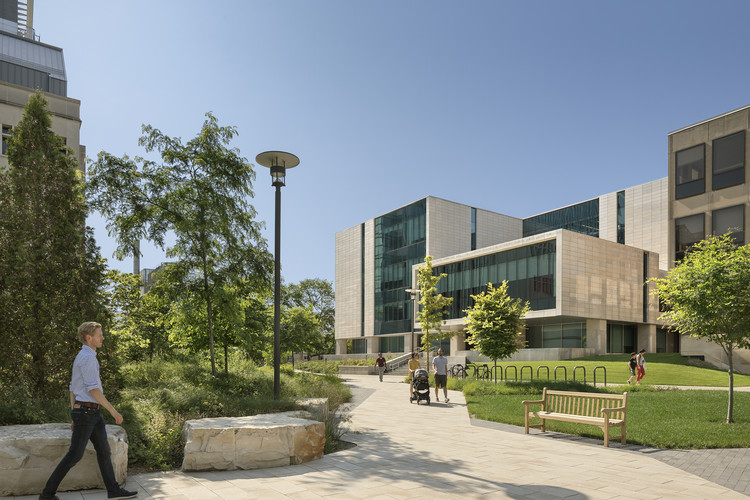 Text description provided by the architects. The Physics Research Center (PRC) is the new home for theoretical and experimental physics at the University of Chicago. It is an adaptive reuse of an existing midcentury modern research building – including a gut renovation of the majority of the interior space, a completely new enclosure, and two new occupied floor levels over the existing structure. The original building, called the Laboratory for Astrophysics and Space Research (LASR), was designed by SOM and completed in 1964. An embodiment of the architectural spirit of its time, the simple, rational building is characterized by an expressed structure and wide floor plates, thereby presenting challenges for renovation due to its intricate reinforced concrete joists and girders, shallow floor-to-floor heights, and uninsulated enclosure.

The University retained the existing structure in part to maintain and protect a landmark research project that has been operating continuously in the building’s basement since the 1960s. The reuse of the existing structure also reduced the environmental impact and influenced the design of the new construction. Sited on the University’s North Science Quad, surrounded by large research buildings, the PRC was conceived as their human-scaled counterpart, a building that celebrates the legacy and stature of physics at the University with refinement, rather than size. The distinctive massing of the addition, with narrower floor plates at the upper floors to allow for better light and views, also orients the building toward the University and its newly renovated quad.

As the original building’s basement mechanical spaces were repurposed to serve an almost doubled building volume, the design had to maximize the efficiency of the building systems and enclosure. It was also important to reinforce the distinctive, collegiate gothic and modern campus buildings with a complementary material palette. The clean overcladding of the building with a limestone rainscreen of R-55 insulation and a structurally sealed curtainwall addressed these issues. The expressed structural grid of the original building is featured at the lower levels, establishing a design language that balances historic character with the present day.

With the University of Chicago theorists and experimentalists sharing a building for the first time in decades, the PRC provides a place for engagement and discourse among disciplines. The building program was developed to include a variety of collaboration spaces as well as new flexible experimental physics labs, special purpose instrument labs, and modern workspace environments. Light- and electromagnetic-sensitive labs are located in the building’s interior and basement, taking advantage of the existing building massing and maximizing daylighting on the broad lower levels.

A seminar room cantilevers out from the existing structure, with an expansive window wall that frames the interior activities of PRC with the North Science Quad. This formal, scheduled space is complemented by a lunch commons that serves as the informal center of the PRC. The space’s central location, double-height glass wall, and chalkboard walls make it a natural gathering space for group meals and lunchtime talks. An open stairwell connects circulation across two-floor levels. An adjoining roof terrace extends this space to the outdoors and provides a unique vantage point above the quad. Shared spaces are connected to natural light, outdoor views, and dining and vertical circulation increase chance encounters between people, encouraging collaboration. 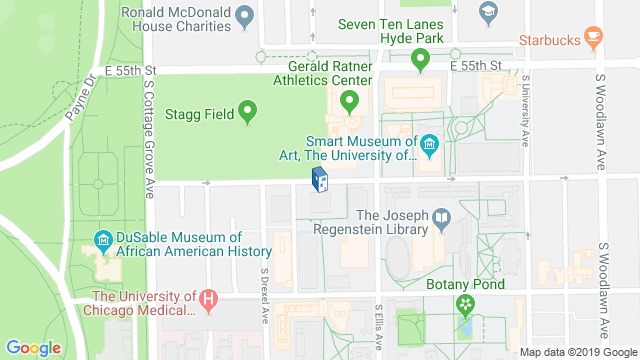 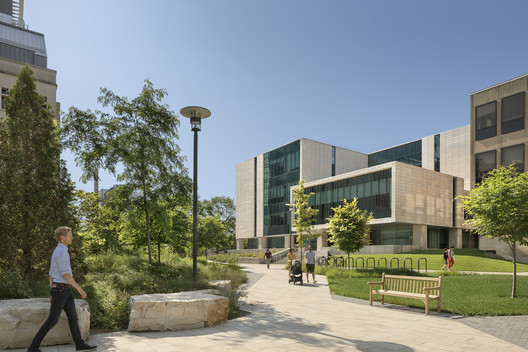