The implementation of a Complete Street is something to be celebrated. A Complete Street initiative is a clear indication that a city is striving for urban mobility and seeking a more democratic and safer use of space. Nevertheless, it is vital to measure the impact of these interventions when implementing future actions.

Joel Carlos Borges Street, the first Complete Street in São Paulo, underwent an evaluation two months after it was completed. The study revealed that 92% of its users approved of the project and believed that the changes were beneficial.

The intervention occurred in September 2017 and it is the first Complete Street from the National Network for Low Carbon Mobility. The impact study was developed by the Sustainable Mobility Lab (LABMOB) of the Federal University of Rio de Janeiro (UFRJ) and made use of a methodology they’ve created that compares the effects of the changes on the street with the impact of a controlled street that wasn’t changed, Gomes de Carvalho Street. This street was chosen due to its similar characteristics with Joel Street. The method aims to, by including the analysis of factual indicators, to strengthen the link between the results of the intervention, instead of attributing them to other circumstantial factors.

The questionnaires were made by LABMOB, together with WRI Brazil and in partnership with the ONG Cidade Ativa. The questionnaires were then applied by the teams from Cidade Ativa and Metrópole 1:1. The survey used three methods for data gathering: questionnaires for pedestrians and business owners; forms to collect information about the built environment; and flow, crossings and permanence measurements. Victor Andrade, LABMOB coordinator, says that this type of study allows for data gathering and an accurate analysis that brings subsidies for an efficiency and efficacy evaluation of urban design. “It is possible to evaluate whether the public money used in a certain urban project has reached the goals or not, and what was the gain for the people and the city.”

The interviews verified that 92% of the people that circulate through Joel Carlos Borges Street approved of the intervention and believed that its impact is beneficial. When it comes to the elements highlighted, a vital contribution was the green bands - spaces that vary from 1.5 to 2 meters wide and increased the pedestrian-exclusive designated space from 29% to 70%, followed by an increase in pedestrian space.

When comparing safety perception results, 80% considered Joel Carlos Borges Street safe, as opposed to only 49% of those who circulate Gomes de Carvalho Street.

The study also demonstrated that business owners have a mistaken perception about how their clients access their establishments. Four out of nine of the formal businesses on Joel Street believe that most of their clients arrived by car. However, only 7% of their customers said they arrive by car, whereas 59% arrive by foot, 28% by train, and 4% by bus, totaling 91% of the consumers.

The crossing analysis concluded that pedestrians still don’t follow the pedestrian-desired path. Due to the high influx of people, particularly in rush hour, it is still common to see people walking in the middle of the street. It was also observed that the temporary use of the pedestrian area, such as street vendors, block the sidewalks and force people to walk on the street.

Pedestrians, in general, were also seen sitting in improvised places, which points to the need for permanent urban furniture both on Joel and on Gomes de Carvalho Street. “This is a demand indicator for the increase of places that are pedestrian-friendly. The answer to this demand can be given in different ways according to the specificities of the analyzed street,” explains Andrade. Some of the possibilities pointed out by Andrade are the pedestrianization of streets, enlargement of sidewalks, and the creation of shared spaces in low-velocity zones.

The intervention on Joel Carlos Borges Street is the result of a partnership between WRI Brazil and the Mayors National Front (FNP), with the support of the Climate and Society Institute (ICS). To learn more about the principles and benefits of Complete Streets, view the Complete Street Online Seminars series. 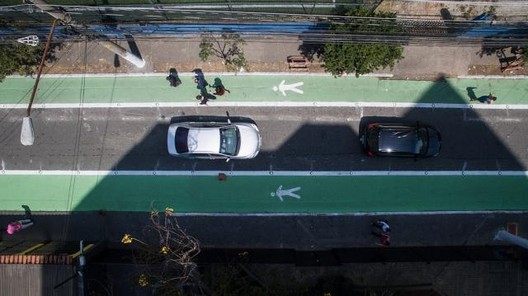