Artistic expression is often undisciplined. Sometimes, the riot of colors and explosion of lines and forms help unleash a 2D illustration out of its medium, which is precisely what Drawing Architecture Studio (DAS) managed to create in Ucommune’s new branch in Dajiang Hutong, Beijing.

In late 2018, Li Han, co-founder of Drawing Architecture Studio, won the 2018 Drawing Prize for her digital drawing of The Samsara of Building No.42 on Dirty Street, which also illustrates a visual narrative of the city of Beijing and its residential chronology throughout the 21st century. This year, DAS took Qianmen area, co-working brand Ucommune’s location as a subject, transforming its road network, architecture, and urban composition into a dynamic, meticulously detailed panorama titled Under the Zhengyangmen.

The map of the area itself is a fantastic graphic composition. To a city, roads are transportation and flow lines. To a drawing, roads are the baselines of the composition. They fragment the drawing, as if they do to the city. But paradoxically, they in fact also connect different elements in the drawing. - DAS

DAS explored multiple sources of inspiration for their illustration. The technique itself - which is the drawing of a 45-degree angle on a flat surface to create spatial depth - was previously used in traditional Chinese paintings. The same oblique projection technique was experimented by El Lissitzky post WWI, followed by Zaha Hadid, whose works reshaped existing architectural drawings, and transformed them into dynamic abstract illustrations. In Under the Zhengyangmen, DAS destroyed the city of Qianmen, only to reconstruct it in a more vigorously assembled composition.

The World Architecture Festival, with co-curators Make Architects and the Sir John Soane's Museum, announced today the winners of their annual Architecture Drawing Prize, established in 2017 to recognize the "continuing importance of hand drawing, whilst also embracing the creative use of digitally produced renderings." 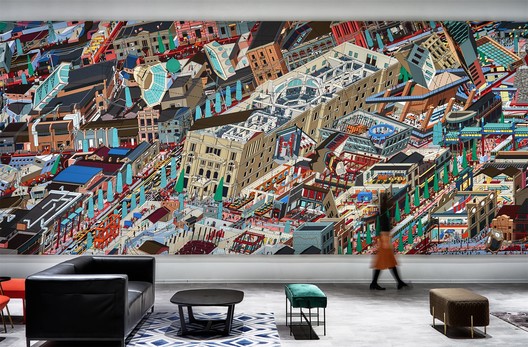