The Internet Era of the Industrial Art Zone
798 is the best-known case study of how an abandoned factory area was transformed into the most famous art zone in China. Crowds of creative professionals gather and all kinds of art, cultural, and commercial activities are carried out every day inside the art zone which is featured with a forest of chimneys and Modernist industrial architecture. In recent years, the composition of the commercial formats at 798 has varied with the rise of rent. Especially accompanied by the fast development of the internet, a new look has been taken on this art zone. Many famous and well-capitalized internet corporations chose to set up their offices in the area, which has diversified the types of business at 798. The rise of sharing economy is also reflected at 798. Co-working and Airbnb modified the way how the original buildings were used. Even galleries were opened at apartments. The rapid spread of bike-sharing system made the bike the best transportation vehicle for touring the art zone. Hundreds of courier tricycles shuttle throughout the art zone every day as the result of booming online-shopping. The outer appearance and structure of the physical space are not changed, but the inner has been completely or partially transformed due to the development of virtual economy. Such new changes in environment and activities all became the focal points when DAS conceived the creation of 798.

A Retrospective Imagination on Cities
Apart from the objective documentation on some representative buildings and environment at 798, a great number of imaginative scenes were designed by DAS and transplanted into 798 to seamlessly join the views from the reality. These imaginations are not ideas for future cities like those featured in sci-fi movies, but are retrospective formulations based on the avant-garde architectural culture from the “golden generation”. Some master architects’ imagination on cities, e.g. Plug-In City by Archigram, The City of the Captive Globe by OMA, Fun Place by Cedric Price, Security by John Hejduk, and Parc de Villette by Bernard Tschumi, heavily inspired DAS. These concepts were given practical functions as a gallery, residence, theatre, or office and gained new life in 798 by constructing DAS’ imaginary 798 together with real elements. By re-drawing the classic concepts from the master architects, DAS brought the avant-garde spirit of architectural culture into 798.

The Continuation of Axonometric Tradition in Architectural Drawing
798 is a further study on axonometric projection as a form of drawing. The Suprematism master El Lissitzky was the first to introduce axonometric projection into the creation of the painting. To him, the axonometric projection is constructive by its accurate description about the spatial relation of the objects. He called his works “proun” which means “the station where one changes from painting to architecture”. Daniel Libeskind continued with this axonometric tradition and pushed it into extremes in his work of Micromegas in which axonometric projection with different coordinate systems are mixed to create a complex and contradictory spatial labyrinth. 798 is very much influenced by Micromegas and could be considered as a figurative reconstruction of the latter: the points in Micromegas become furniture and sculpture in 798; the lines become streets, pipes, and chimneys; the surfaces become walls and squares; and the space become cafes, galleries, and factories. For the final representation, DAS also used Pop Art paintings as a reference and added some popularized aesthetics into 798 with flat style, simple lines, and bright colors.

A Rethinking on the Relation Between Drawing and Architecture
If 798, as a drawing itself, exemplifies the continuous inspiration by classic avant-garde architectural culture and design on contemporary architectural drawing, then beyond the drawing, the realization of 798 once again studies the relationship between drawing and architecture. The renovation design of the Hyundai Motorstudio building where the mural is located is by New York-based design company 2x4. In marked contrast to the complexity and dazzle displayed by the mural, the design of the building is a model of concise and understated beauty. Resulted from the strict architecture preservation terms at 798, the original ordinary red-bricked façade must stay untouched. Therefore, the focus of the design was put on the design for interior programs, materials, and details. However, the Motorstudio was still able to become the new landmark at 798 without too much difficulty by presenting the large mural on its biggest wall facing the main street. Such a solution reminds of the design proposal of National College Football Hall of Fame by Robert Venturi, which is also known as the “billboard” proposal. Here, the “billboard” becomes the mural 798 and the Hall of Fame behind the “billboard” becomes the exhibition space of Hyundai Motorstudio.

Thus, the relation between the mural and building unfolds in 3 levels. Firstly, the mural is an urban public artwork on an architectural scale; secondly, it constructs the main elevation of the building as a construction material – color brick. A film produced by 3M especially for rough surface was used for the printing of 798. As the finished mural perfectly fits into the texture of the brick wall and the original touch of the architectural surface remains, the mural could be seen as part of the construction material. And finally, the mural becomes the key component of the architecture as a “billboard”. From Sistine Chapel to Markthal Rotterdam, the large-format murals have always become the most eye-catching element in the space either as a communication for messages or the surface decoration to the architecture. From Venturi’s “billboard” proposal to the Billboard Architecture categorized by Terunobu Fujimori, the flattened and content-rich façade is deliberately highlighted and the three-dimensional spatial experience is simplified into a more straightforward and flattened display. At the present when being Instagrammable has become a criterion for evaluating a space with the popularity of social network, such an intentional flattening approach makes more sense. More than ever, people are anxious for direct, overwhelming visual experiences that are worth to share. Undoubtedly, drawing has its natural advantages in creating unique visual experiences with its flexibility in content, scale, and representational style. Therefore, it becomes more logical that the drawing and architecture would accomplish each other, also as an active response to the internet from the current architectural culture. The case of the mural 798 and Hyundai Motorstudio is just such an example. 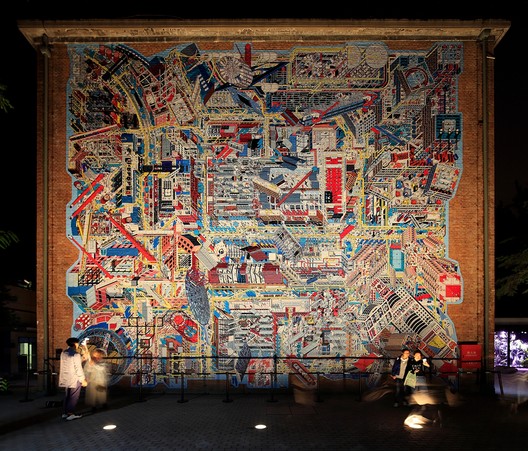