Save
Architecture without Architects: The Cut-Paste Typology Taking Over America
Share
Or
Copy

Technology, of course, constantly changes architecture. When steel and elevators were developed almost 150 years ago, skyscrapers appeared; when wood could be industrially cut to precise sizes, light frame wood construction became cheaper and easier to build than timber framed buildings—and, along with the GI Bill, helped flood the American landscape with single family homes.

Similarly, zoning has always impacted the shape of buildings (think of New York’s “wedding cake” skyscrapers, the Mansard roofed buildings of Paris, mid-century suburban homes on one acre lots, and now the needle skyscrapers popping up in midtown Manhattan).

Right now, all across America, we have yet another example of code-shaped architecture. The 2012 International Building Code (IBC) described a new building type that made mid-rise structures substantially cheaper and quicker to construct, while still maintaining the same structural and life safety standards.

“Stick Frame Over Podium” is the term most often used to describe these buildings. Also called “One Plus Five" or "Two Plus Five" construction, this hybrid construction uses a cast concrete or fireproofed steel base of 1 or 2 stories that then has the cheapest, quickest, building system available built over it: light and stick frame, usually limited to 5 additional stories. Engineered wood is often used and, when combined with fire suppression sprinklering and wall/floor separations, huge savings in construction and time are realized. As a result, six or seven stories can explode out of the ground in months.

However, there are consequences. When technology allowed flat roofs to be plausible in the early 20th Century, the cause of Modernism was given great license to make architecture more abstract and geometric. But flat roofs leak. And as architects embraced the distilled fine arts expression of sculptural form via flat roofs, the perception was that fine arts architecture leaked, and that perception remains.

And yet those same flat roofs also saved money. The IBC sanctioning of stick-frame-over-podium has brought costs down to the point where buildings can be financed and constructed during an exceptionally brutal recession. The result is that these buildings are everywhere. The cost benefits of  “5 over 2” building have an obvious aesthetic byproduct: boxiness in extremis. There is only the meter of building methodology and the barest of melody in applied materials to the straight-jacket of this system.

We’ve been down this road before. The federal tax-laws of the 1980’s created economic advantages for investors to provide multi family attached housing. Before the deductibility changed, that non-aesthetic provision created a flood of predictable architecture. The snaking meander of the 1980’s condo created a “type” that became an architectural cliché, despite sometimes alluding to the beauty of MLTW’s seminal Sea Ranch.

Good architects have always worked hard to make the banal beautiful, but this new challenge is daunting. The small spans, minimal costs, and building code mandated height control, means the base building forms are pre-determined. In essence these buildings have been designed by the code. These dreary boxes are receiving architectural attempts by their designers to be expressive, interesting, or at least less boxy, but the overwhelming geometries of this construction produce an inevitable result.

Ultimately it’s money that shapes buildings. While architect Cliff May may have created the Raised Ranch off of a Prairie School model, and Royal Barry Wills coined “Colonial” as a defined aesthetic wash, it was the financial realities of industrially produced lumber that defined the dominant aesthetics of home construction after World War II.

No matter who comes along to successfully vitalize “5 over 2” construction it’s clear that the vast majority of these projects had their essential aesthetic realities determined by the International Building Code, not by the designers who are mandated to follow it.

Architects project themselves as the wizards of aesthetic control and, given infinite money, this is the truth. But for most architects and most buildings, the harder realities of technologies, codes and sites, are the baselines for aesthetics, with the architects responding (often heroically) to the necessities they must accommodate. This is precisely where the human spark of innovation has value. In the present flood of “Stick Frame Over Podium” building, the systems have defeated the humans who have failed to find a way to transform their inherent limitations.

I am confident that the greatness of Raymond Hood’s “wedding cake” manipulations of Rockefeller Center, or Mies van der Rohe’s skill in using huge expanses of plate glass, show how design can create visual delight from technological realities.

We’re on the edge of a revolution in the way we make buildings, courtesy of the looming reality of Artificial Intelligence. If beauty is the ultimate end of architecture’s mission, AI must become a tool, not an excuse, or default option. Let’s hope that the beauty imperative can make the flood of “stick frame over podium” midrises sweeping across America an explosion of design, rather than a code plug-in so common today. 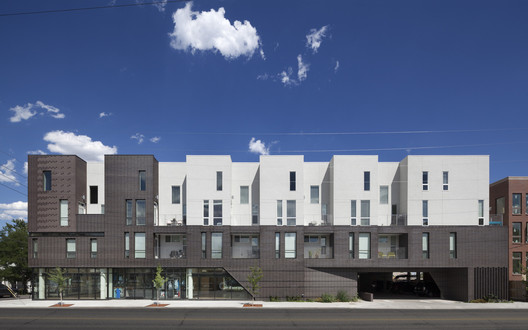