Portuguese architectural practice Aires Mateus have designed a new addition and entrance to the Museum of Augustins in Toulouse, France. Bringing together the museum and the Convent of Augustins, the proposal was made to clearly open to the city. The design aims to respect the spatial values of the convent and museum while standing out from its context and historical reference. 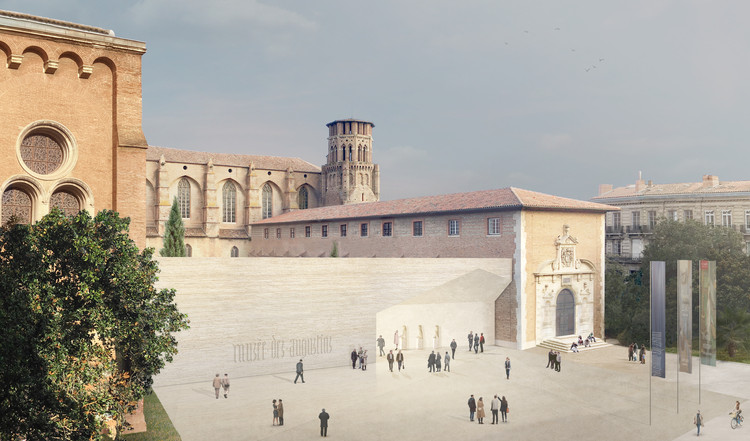 As Aires Mateus said, the Museum of Augustins has overlaped the Convent of Augustins throughout history. Their design plays upon the charm of the museum and the symbiosis between art works and museography alongside the convent. The new composition occupies the old southern wing of the cloister, recovering the dimension of the disappeared Chapelle de l'Ecce. It aims to bring the city and the convent closer together. This volume brings back thickness to the south wing of the convent and reopens its connections, according to the original composition of the cloister.

A clear entrance was made for the museum, marked by an opening that draws visitors inside. This opening reveals a deep and mineral void, which leads the visitor to the cloister. The orientation of the space established the longest possible trajectory between the city and the cloister. The path is enhanced by an almost imperceptible slope that flows subtly from the entrance towards the cloister.

On the cloister side, two ancient passages are reopened and illuminate the gallery. The first one, a monumental ogival arch, is completely recovered, creating now a passage between the new building and the convent. The second, an arch, becomes a window, bringing light into the building and creating a visual discovery of the cloister from the entrance area. The big entrance also communicates with a smaller space that monumentalizes the facade of the adjacent building, allowing the light reflected by the bricks to invade the space. In a contemporary city immersed in images, movements and noise, the new entrance is a void to which visitors can naturally turn.