All
Projects
Products
Events
Competitions
Save
"Architecture from Someone's Imagination is not Enough": Interview with Junya Ishigami
Share
Or
Copy

I think that the conversation with Junya Ishigami at his experimental (and very international) studio in Tokyo was one of the most memorable experiences of my recent trip to Japan. Junya's visions for not just of his own architecture but for the profession were wholeheartedly inspiring. He thinks that architecture today is “not free enough.” He wants to diversify it, liberate it from so many architects’ insistence on following particular building types and, in general, our narrow expectations. He wants his architecture to be soft and loose and finds inspiration in such improbable metaphors as clouds or the surface of water. “We need to introduce more varieties of architecture to better address peoples’ dreams…I want to expand architecture into the future by creating new comfortabilities,” says Ishigami, whose two recent manifesto-like exhibitions in Paris questioned the very nature and purpose of architecture. He is a visionary and essential voice in what is perhaps the most unsettled of all professions.

Vladimir Belogolovsky: I saw your fantastic exhibit at Centre Pompidou in Paris a couple of years ago. It was called “How Small? How Vast? How Architecture Growth.” It was so pure and beautiful.

Junya Ishigami: Thank you. Now I am preparing another show also in Paris at the Cartier Foundation, called “Freeing Architecture.” In the first show I wanted to demonstrate studies of how I think about architecture. There were pure concepts, completely independent of any reality and limitations. The new show is all about 20 real projects – some already built, others under construction.

VB: How can architecture be freed?

JI: Each era is defined by a particular movement in architecture. For example, at the time of Modernism, many buildings were built for the masses in a very particular way. But in our time, we no longer have to build in one particular way. We can build in so many new ways. I want all of my projects to be different. I think now the purpose of architecture is to bring variety by addressing each project and each person very particularly. Also, I don’t think architecture is only for people. It may be for nature, the environment, animals, insects, and so on. To me, to free architecture means not to be dogmatic or stylistically driven but to be specific and inventive in every case.

VB: You were first noted for your fantastic table project. At 9.5-meter span and made of just 3mm thick single aluminum sheet, not only it supported itself but also carried 700 kilos of plants. Where did this idea come from?

JI: It started as a small restaurant interior design project, for which I was asked to design tables. The client’s philosophy is all about serving very few people but in a very special way. The idea was to create space for small groups that could enjoy a meal in a private, secluded setting. But the space was too tight to introduce any partitions, so I proposed to define the space by several oversized tables. Each table was larger than needed for each party, so the unoccupied areas were filled with plants to screen the space for privacy and atmosphere. That commission led to an installation project, in which I pushed one of the table’s dimensions to the extreme. The gallery space had a narrow entrance, so the idea was to roll the table to fit it in and unroll it once inside. [Laughs.]

VB: Speaking of this table project you said, “I had in mind the idea of expressing something very gentle, almost like a cloud.” Could you elaborate?

JI: The cloud metaphor may be valid but the main image I had in mind was the surface of the water. That was the inspiration. You can see that in the installation the table seems quite monumental but if you touch it ever so slightly you see how all the plants start swaying, which is like swimming in a pond. Originally, I wanted this table to be made as a building within a building. But I didn’t want it to be a pure form with an austere surface. I wanted to create architecture within the gallery. So, we calculated how to distort the table and how it could be brought back to equilibrium by heavy plants. The original tables for the restaurant were very sturdy but for the installation I wanted to do the opposite – to make it so thin and light that it would appear to be floating or like the surface of water. I like when architecture is soft.

VB: You said, “I want to create architecture that has never been done before. I want to push the boundaries of how architecture is constructed.” How would you define the intentions of your architecture?

JI: Again, my intention is to free architecture by inventing new types. We typically have very particular types of buildings. By inventing new types and varieties we will give people more options to explore many more lifestyles. How do we do that? That depends on each client or site conditions, or program. But even two identical programs can generate two completely different results. What’s important is that we, architects try to challenge what we know. For example, my Kanagawa Institute of Technology Workshop is a new proposal. Typically, when clients and architects start working on an office type they already know what they want. But my position is this – yes, we know what the program is but the solution is probably going to be different from any expectations.

Another example – now we are working on a house/restaurant for a chef. His request was to create a kind of space that would have an aging quality, not new. Typically, a new building looks new, and it looks like other works by a particular architect. In this project, we used earth itself to build the house. We dug a pit by leaving earth in places where we wanted to have interior spaces. Then we poured concrete; once it was all set, we removed the remaining earth. The result is like a series of caves. It is going to be a French restaurant, so the original idea was to have an atmosphere of an old winery. What I like about this project is that everything is precisely thought through but when we actually started constructing it, the overall form and quality of concrete surfaces were surprising. Also, there is flexibility in how spaces are going to be used. They are not precisely determined and their use can vary. So, every space feels different.

VB: Before opening your office in 2004, you worked at SANAA. What was the atmosphere there like and what would you say you learned from Kazuyo Sejima and Ryue Nishizawa?

JI: They don’t have any particular way of making architecture. What they have is their way of how to question architecture. That was the lesson.

VB: You said, “Usually architecture is divided by a wall, but I want to make space that’s soft, ambiguous, flexible, and new. I want to create a new feeling in architecture. New space, which is a fusion of space, atmosphere, structure, and landscape.” Could you talk about your inspirations? Where do you fish for your ideas?

JI: Architecture is never fixed. It is always affected by the environment, time, or people. So, I want to make new types of flexibilities in such a way that my architecture can be redefined and used differently. I want my architecture to be loose, so there are many interpretations.

VB: But wouldn’t you say that your solutions, however influenced by the particular conditions, come from you?

JI: Still, it doesn’t make me an artist. If I did not have a site and did not have a client, I don’t think I could design a building. But an artist works on his artwork independently. He doesn’t need a client or commission. For architecture to occur there needs to be a strong link to reality. Reality is fundamental. Architecture coming entirely from someone’s imagination is not enough.

VB: What kind of house would you want to design for yourself?

JI: The only thing I know is that it would not be a dream house.

VB: You said, “If I have a chance to change the future, I want to try it.”

JI: Sure, I want to expand architecture into the future by creating new comfortabilities.

Share
Or
Copy
About this author
Vladimir Belogolovsky
Author
••• 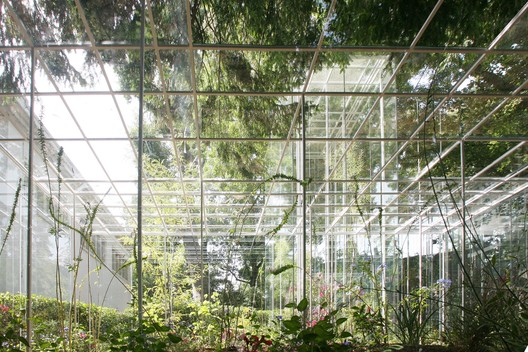