Text description provided by the architects. Traditional school planning in modern Chinese cities usually provides students and children with an adult-scale campus environment at an excessively early stage. Such environment gives no help to them in coping with high educational and social pressure. Facing these phenomenon, it is the architects’ responsibility to subversively break these conventions in school planning and offer children with space of their own scale and age in which they will enjoy living and studying.

Ideal school in High-density Space
The project of Hangzhou Haishu School with a kindergarten and a primary school, is located in the Western Science and Technology City of Hangzhou.The architecture and interior design are both designed by LYCS Architecture.It is inspired by a random impromptu child drawing that depicts his ideal school which is like a small town full of small scale spaces and “happy” streets.Based on this inspiration, we divided the 28000 sqm campus into 15 much smaller scale gabled volume. The scale of each volume gradually increases according to the growth of children’s age and the variation in their behaviors. A comfortable campus environment is formed by small inner courtyards within and among these volumes.

The school project consists of teaching buildings, an administration building, a gym, a canteen, etc. All the functional spaces are connected in series through corridors, inner courtyards and corridors of different opening degrees. Exposed stairs and corridors shaped dynamically are not only designed for circulation, but also for plenty of activity spaces. Under the gabled roofs are various common areas particularly designed for different types of gatherings, communications and social activities. As a mini society, the school enables students to build their own social consciousness with daily experience.

Small-scale House for Different Ages
This project consists of 27 classrooms for primary school program and 12 classrooms for kindergarten program, which forms three U-shaped blocks and are distributed from south to north accordingly. The heights of these blocks increase incrementally to adapt different demand of scale of different departments, as well as to create a dynamic skyline.

The enclosure of the building creates a distinctive inner courtyard and interesting street space.The space in-between buildings offers inner courtyards with variation of paving and landscape. A main street that satisfies youngster’s curiosity and desire is also created in between the blocks.

The kindergarten building stands as an independent U-shaped unit with open arms embracing the children. The rainbow runway echoes the architectural colours, creating a space that is colorful, unrestrained and whimsical. The "small house" form of the building was extended to the interior. The shapes of children's paintings appear here, so that they will get a wonderful first impression of the world from their curiosity about architecture.

The primary school is divided into two parts, the north and south sides, corresponding to the lower grades and the upper grades.The south buildings consist of four 4-floor units which form a half yard towards the Central open space.From entering the campus, the children walk into the yard by center walkway and then get the teaching building, which also guided the children to explore the campus space. Located near main road in the city, the highest building on the north side provides an unified facade that coordinates with the overall urban interface.

In addition, the corridors and public spaces are enlarged purposely to connect the second floor of all building, so as to create an extra elevated public activity area.

Recognizable and Colorful Gable
In this campus colored with white and grey, each of the gabled facade is designed differently in color,material and window forms, as to signify the different usage of each building. These facade painted with bright colors of yellow, green and light blue not only renders a warm and lively atmosphere, but more importantly underlines the sense of belonging and identification of different area.

Additionally, five buildings within the compound are covered with deep red in order to create a different rhythm within a unified materiality. Students,especially kindergarten children can easily describe their location in the campus according to the different facades,which helps to form their own cognitive map of the campus.

Adhering to a special variation in scale, the design of this entire campus closely follows the growth and emotion of its users.The design notion of “the story of a small town” will allow students and children to enjoy their own fairy tale like campus. 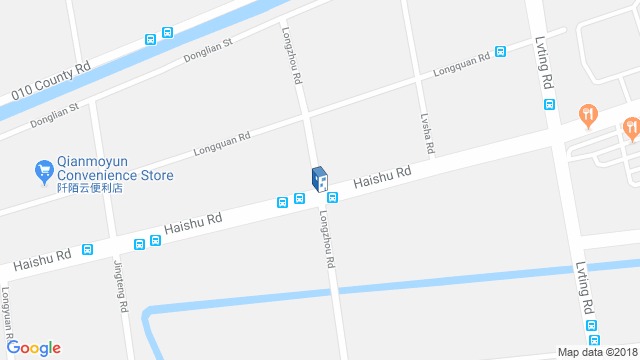 Location to be used only as a reference. It could indicate city/country but not exact address.
Share
Or
Copy
About this office
LYCS Architecture
Office
••• 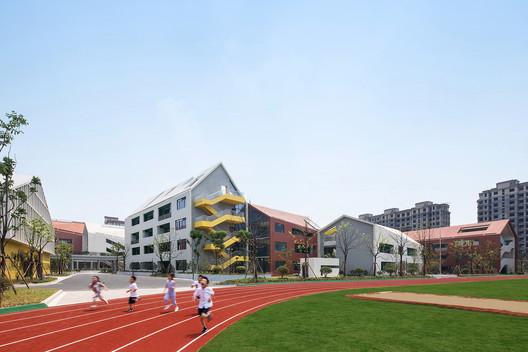