Save
Bogotá, Through the Lens of Leo Matiz
Share
Or
Copy

Bogota's modernization between 1940 and 1970 is featured in a wide array of books, magazines, and photo albums, as well as in the city's own public and private archives. Every one of these sources reveals a deliberate, as well as critical, approximation of how modern architecture reconfigured the city's center and brought together the new buildings and urban space with the already existing cityscape.

When analyzing the impact of photography from the street, it's impossible not to talk about Leo Matiz, Armando Matiz, and Hernán Díaz. These three photographers have captured the personalities, events, and urban life of Bogotá. Here, we've compiled some of their most noted works featuring the streets, plazas, crosswalks, and landmarks of Bogotá. Through their photography, modern heritage finds a place on the stage of collective memory, where architecture and urban spaces are the stars.

In this edition of Bogotá in 10 photographs, we will come to know the legacy of Leo Matiz: 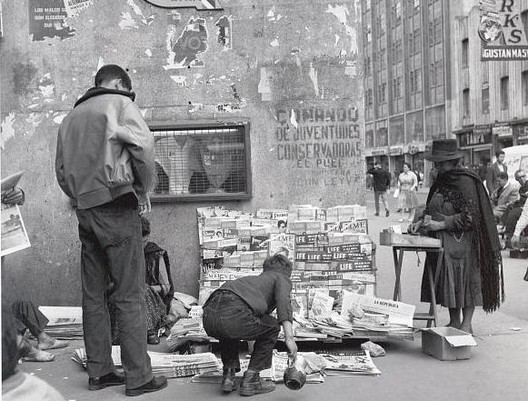 Born in Aracataca in 1917, Leo Matiz began his editorial career at 16 by publishing caricatures in Civilización Magazine, the same magazine where his first photos were featured in 1933. Afterward, he worked as a photographic reporter for El Espectador (The Spectator), El Tiempo (The Time), and Estampa (Stamp) Magazine. At 18, he founded Lauros Magazine and enrolled in the National School of Fine Arts in Bogotá. He was a multi-faceted artist: journalist, painter, editor, actor, caricaturist, and photographer. In the 40s, he traveled to Mexico and the United States where he worked for prestigious magazines such as Life, Reader’s Digest, and Norte, among others. In the early 50s, he moved to Bogotá and opened his own art gallery, the same one in which renowned painter Fernando Botero showed his work for the first time in 1951. In this same decade, Matiz was recognized as one of the top ten photographers in the world.

Traveling through Latin America, as well as Palestine, Beirut, and Tel Aviv, Matiz's popularity as an international photographer grew, further cementing his place as one of the art sphere's great personalities. He received national and international recognition, such as the Chevalier des Arts et des Lettres prize, awarded by the French government in 1995, and the Filo d’Argento Prize in Florence, Italy in 1997.

Starting in the mid 20th century, Matiz captured numerous images of Bogotá that showcased the city's extreme urban and social changes. His photographs were characterized by their emphasis on single elements and the contrast between natural scenery and cityscape; pedestrians and public spaces with downtown skyscrapers; modern buildings with historical monuments.

Thanks to the Archivo de Bogotá.